Does a video showing an explosion at the World Trade Center's South Tower on September 11, 2001, but no aircraft, prove no planes were involved in the 9/11 attacks? No, that's not true: Video and images from other angles show the planes hitting or about to hit the Twin Towers. In addition, The 9/11 Commission Report by the National Commission on Terrorist Attacks Upon the United States details the flight paths of the four commercial aircraft hijacked and used in the terrorist attacks.

9 I I ... good luck looking for those planes...
.
They censored well, but not long enough: they did not think that truthers would post their videos years later. 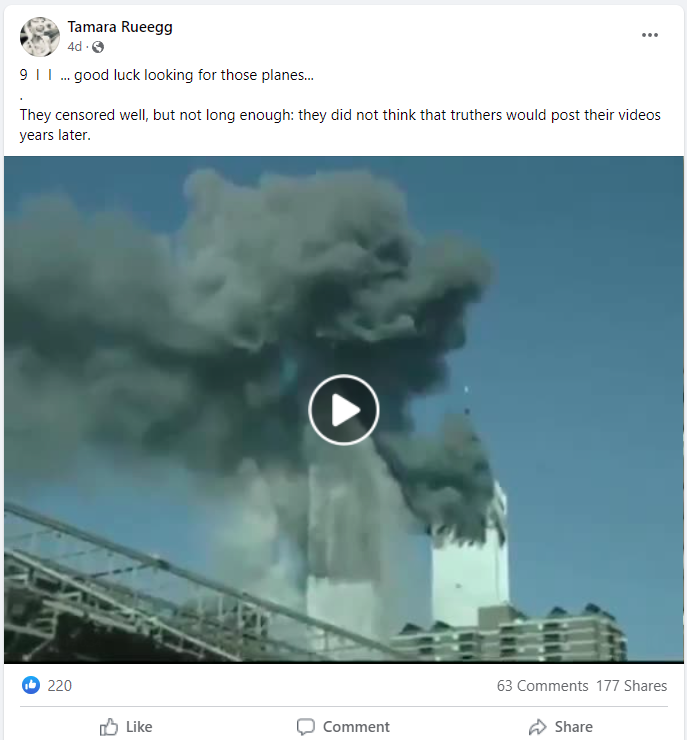 The video in the post shows the moment of impact when United Airlines Flight 175 hit the South Tower at 9:03 a.m. ET. The North Tower was already in flames after American Airlines Flight 11 hit the North Tower about 17 minutes earlier. Only the explosion is visible in the Facebook video because the plane hit on the opposite side of the building. CNN's live coverage of the terrorist attacks began shortly after the first plane hit the World Trade Center (WTC). It shows the second plane crashing into the building and the subsequent explosion:

A separate video compilation of the attack shows 50 different views of the plane's impact on the South Tower:

AP News also published images of an aircraft crashing into the South Tower, including this one: