Do online photographs show absentee ballots arriving at a Detroit processing center on Election Day "hours after the legal deadline" for counting ballots? No, that's not true: Election officials in Detroit say late-night deliveries are the normal -- and legal -- part of the process of collecting absentee ballots for verification and tabulation.

The claim appeared in a November 9, 2022, story on the Gateway Pundit with the title "Here We Go Again... Suspicious Ballots Arrive Way After Legal Deadline in Detroit." It opened:

Michigan polls closed at 8:00 PM yesterday, election day 2022. The results strongly favoring Democrats shocked the pollsters and prognosticators, who all predicted some degree of a 'red wave' that never materialized.

Here's how the story looked on the day this fact check was written: 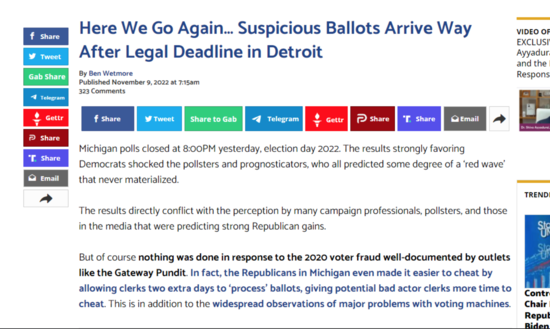 The Gateway Pundit claimed it has "exclusive video and photographic evidence" of the alleged fraud in two pictures that show stacks of ballots being unloaded from the back of vans outside the elections department at 2978 West Grand in downtown Detroit.

The photographs that appeared with the story can be seen in this composite made by Lead Stories: 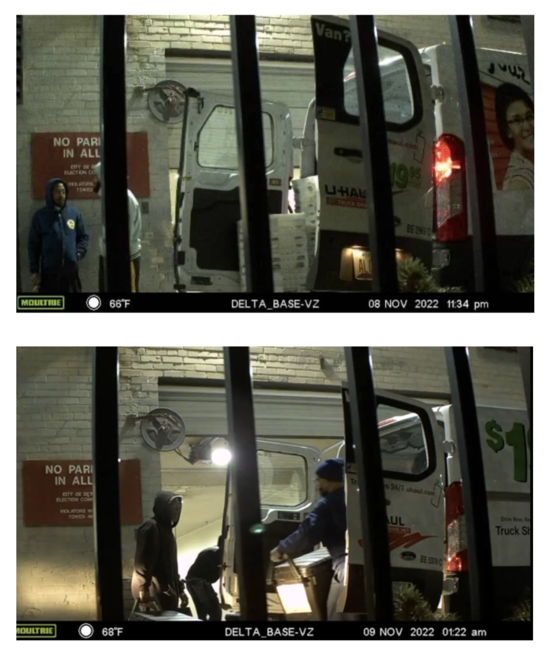 The acting spokesman for the Detroit Department of Elections for the 2022 midterm elections, Matt Friedman, told Lead Stories in a telephone interview on November 10, 2022, that The Gateway Pundit's claims are false. The photos accurately show the city's rented vans delivering collected absentee ballots, which is part of the legal ballot collection process, Friedman said.

"This whole allegation that ballots being picked up 'in the middle of the night' is exactly how the process is supposed to work," said Friedman, who is on loan to the Department of Elections from the nonpartisan elections-outreach organization DetroitVotes.org.

Friedman said he was at the Detroit Department of Elections, where the ballots were processed through the night on November 8, 2022, and that two vans delivered about 4,500 absentee ballots. In addition to drop boxes, some absentee ballots also were collected from post offices.

"I saw it all happen," Friedman said.

Under Michigan election law, "absentee" is the term applied to all ballots that are requested in advance, and then returned by mail, in person to a clerk's office or placed in drop boxes.

If those ballots are not returned or dropped off until Election Day, "the process of collecting those absentee ballots from across the city can't even legally start until after 8 o'clock (when polls close)" Friedman said.

Collecting ballots from some 20 drop boxes scattered across Detroit takes hours because the city spreads out over 139 square-miles, he said.

"It's really a logistics operations to collect all those absentee ballots," he continued. "So, arriving in a vans at about 1:30 a.m. was more or less on schedule."

On its website, the Michigan Secretary of State's Office also confirms that many jurisdictions statewide need periods ranging from hours to days to complete ballot collection, verification and processing after the polls close.

Detroit has about 500,000 registered voters and 80,000 absentee ballots were requested for the 2022 midterm elections held this week, Friedman said. The majority of those were returned to the Department of Elections prior to Election Day and were pre-processed on November 6 and 7, 2022, as allowed by law. Those counts were released to county and state election officials at about 10 p.m. on Tuesday, November 8, 2022, he said.

The Gateway Pundit made similar fraud allegations against the Detroit election center in a story published on February 5, 2021. Claiming that the outlet had exclusive video proof, that story charged that tens of thousands of ballots had been delivered after the 8 p.m. deadline for tabulations.

Those claims have been fact-checked and labeled false multiple times, including here, here and here.