Did the European Organization for Nuclear Research, most commonly known as CERN, admit in 2022 that it is "communicating with entities from the other side"? No, that's not true: Online speculations about the CERN-managed particle physics laboratory in Geneva, Switzerland, were based on a distorted interpretation of a 13-year-old quote from its former research director, Sergio Bertolucci. "Imaginative works, inspired by our scientific research... should not be confused with the actual scientific research," CERN commented to Lead Stories on November 10, 2022.

The post contained a video with a low-resolution version of a clip previously published on Twitter on September 23, 2022. Text embedded in the video said: 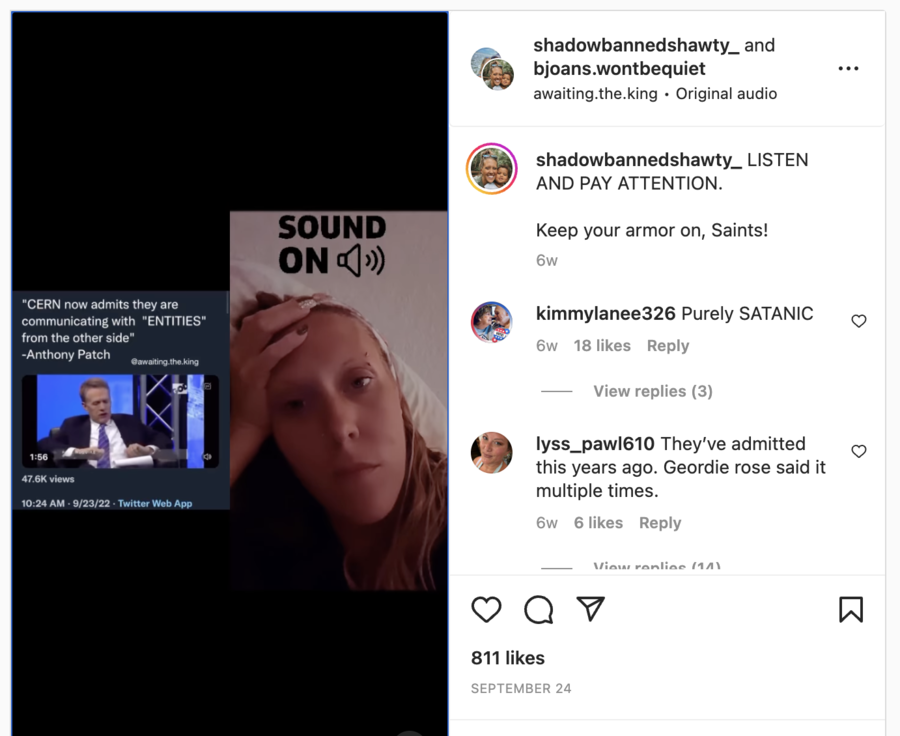 As of November 10, 2022, no credible media reports or official statements confirming the claim could be found:

The posts on Twitter and Instagram originated from an interview that appeared on YouTube in 2018. The guest of the program was a writer, Anthony Patch, not known to have published research papers on particle physics in peer-reviewed scientific journals or to have worked for CERN.

The interview referred to a quote from former CERN Director of Research and Scientific Computing Sergio Bertolucci about the research center's Large Hadron Collider (LHC), which it describes as "the world's largest and most powerful particle accelerator."

In 2009 remarks to journalists about the LHC, according to the British tech news website The Register, Bertolucci commented that:

Bertolucci, who chaired CERN's LHC committee from 2004 to 2007, did not state that CERN had communicated with "entities from the other side," an apparent reference to spiritual beings. He commented that the LHC potentially could act as a "door" to "an extra dimension."

The Register article explained how the LHC could replicate conditions similar to those "not long after the Big Bang." Ironically, a screenshot of this article was shown in one of the copies of the interview used in the video on Instagram: 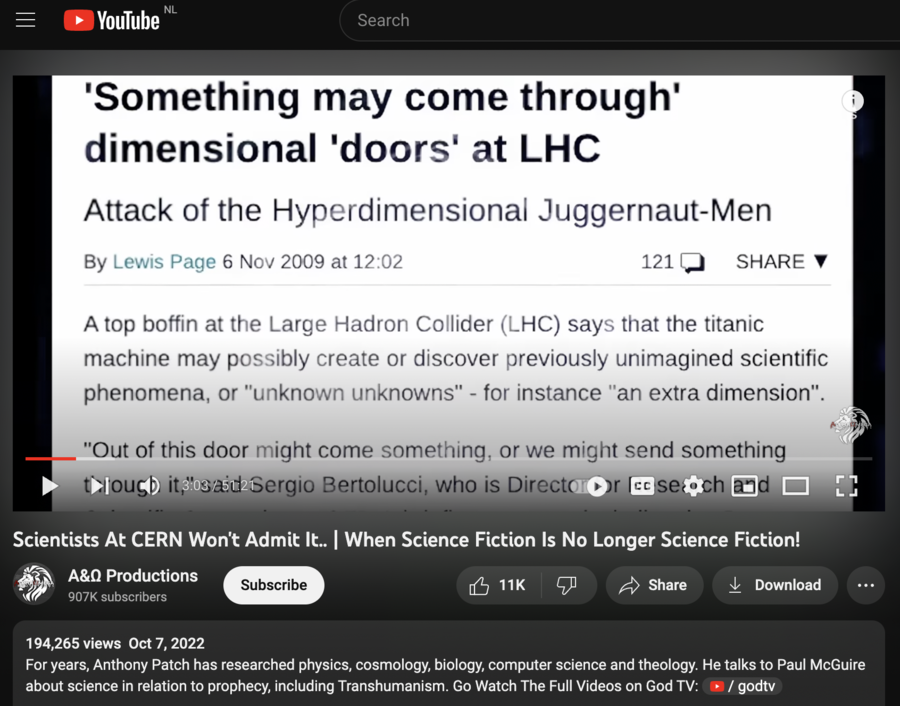 Even the men in the YouTube video admitted (at the 06:07 mark) that Bertolucci did not mention any "entities":

HOST: Did he use the word 'entity'? What word did he use?

Another article saved in the CERN archive of media clippings contains some further clarification of Bertolucci's remarks. He pointed out that the "door" would be open only briefly, for between 10 and 26 seconds, and would not lead to any significant changes on Earth:

...after this tiny moment the door would again shut, bringing us back to our 'normal' four dimensional world... It would be a major leap in our vision of Nature, although of no practical use (for the time being, at least.) And of course [there would be] no risk to the stability of our world.

Bertolucci left CERN in 2015, according to his CV.

But none of these details made it into the video on Instagram or the interview posted on YouTube.

Various conspiracy websites quickly picked up Bertolucci's quote from The Register article, according to physicist Kristine Larsen, a professor of geological sciences at Central Connecticut State University, in her book "Particle Panic!: How Popular Media and Popularized Science Feed Public Fears of Particle Accelerator Experiments." The author attributes such fears "in part to careless communication from CERN":

...my hope is that scientists can pause for a moment and try to see the argument from the side of the anxious nonscientist. Recall that physicists also voiced considerable excitement about the possibility of the LHC being a "black hole factory," something the average person might find difficult to picture as positive...

Historically, CERN appeared in the news not only because of its scientific experiments. For example, in 2009, it collaborated with Hollywood producers shooting a movie version of "Angels & Demons," a mystery novel by Dan Brown. Expressing CERN's eagerness to cooperate on the project and "show how exciting the reality of antimatter research is," Bertolucci said:

Both fiction and science want to take us from the ordinary to the extraordinary; the difference is that science has to operate entirely within reality.

On November 10, 2022, in an email response to an inquiry from Lead Stories regarding the claim on Instagram, a CERN spokesperson noted that its "research captures the imagination of lots of people," but cautioned that "imaginative works, inspired by our scientific research .... should not be confused with the actual scientific research."