Did a serial killer murder a half dozen girls in Eureka, California, in the first two weeks of November 2022? No, that's not true: Lead Stories searched Eureka area news sites and found no crime reports or news alerts about this. "This is false," Eureka Mayor Susan Seaman told Lead Stories in a November 21, 2022, email responding to our inquiry about the claim. 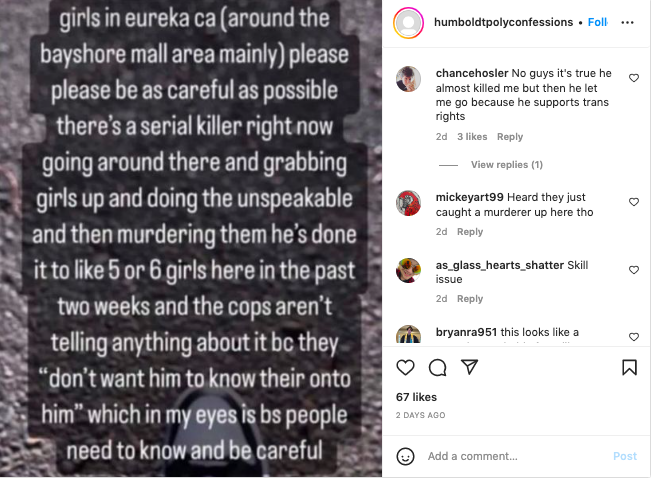 Both local newspapers, the Times-Standard and the North Coast Journal have no mention of missing or murdered girls.

Amanda O'Neill, police records manager for Eureka, emailed Lead Stories on November 21, 2022, to say there's no documentation for the claim:

This information is very much incorrect. The City of Eureka has not had any homicides reported and no suspicious circumstances near the mall as described in the post.

Seamans elaborated on her rebuttal of the claim, writing:

There has been no news of girls missing - certainly not of a serial killer.

The Eureka claim is not likely related to the only other recent serial murder case Lead Stories found in California in the fall of 2022. News reports can be found here and here about police in Stockton, California, arresting a suspected serial killer on October 15, 2022. Stockton is more than a five-hour drive from Eureka. In the Stockton case, at least six of the victims were men over 21.