Fake news website [email protected] posted an article titled "FARM MURDERS: US PRESIDENT THREATENS TO INTERVENE IF SOUTH AFRICA DOES NOT COME UP WITH A SOLUTION TO FARM MURDERS". The story opened:

According to news sources, US President- Donald Trump, said he is willing to lend a hand or come to the rescue if South Africa cannot provide a resolution to what he calls white farmers genocide.

Trump said he thinks the South Africa government is intentionally turning a blind eye to the matter because the farmer are white.

It then went on with following (fake) Trump quote:

I KNOW THE HISTORY OF THAT COUNTRY. SO IT'S SAFE TO SAY THIS IS ALSO A RACE ISSUE, WE SHOULDN'T BE SHY TO BRING UP RACE IF WE WANT TO ROOT THE PROBLEM

Trump also revealed he is open to discuss solutions to the problem, and the country should know that USA will not observe a country destroy itself.

We were unable to locate any source for the Trump quote. Nor did we find any of the "news sources" mentioned in the article that made any mention of Trump "lending a hand or coming to the rescue" in South Africa. 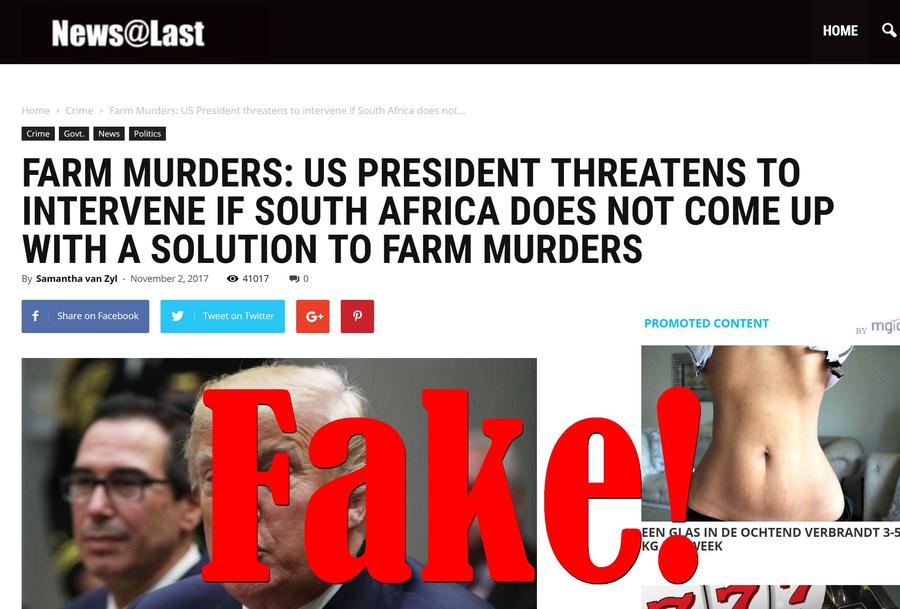 The website [email protected] already published made up news before so we are going to go ahead and call this one fake news too.