On Saturday February 17, 2018 our investigators recieved a story so bizarre we just had to look deeper into it. Sara Dunmire and Micheal Dunmire of Mount Pleasant Michigan was expecting their first child together.Due on february 6, 2018 family and friends have told us just how happy this family was to be bringing this little baby whom the decided to call Landon into their family. Family and friends talked about the baby shower and all the stuff that was purchased and done to prepare for this baby. One witness had said the baby nursery had spilled out into living room. Another said the parents especially expecting father Micheal was above the moon as this would be his first child and a son at that. witnesses say Micheal couldnt have been more happier. As the month of February came and the due date passed baby Landon still had not made an entrance.

We were unable to get any confirmation about the basic facts of the story and the many spelling, punctuation and grammar mistakes are not indicative that the story was written by a real journalist. We did find one Facebook profile that appeared to belong to someone who looks like the woman in the picture and whose profile showed up when searching for the name and location mentioned in the story but there was nothing related to the article on her wall. We've reached out to the owner of the profile for comment but haven't heard back yet. 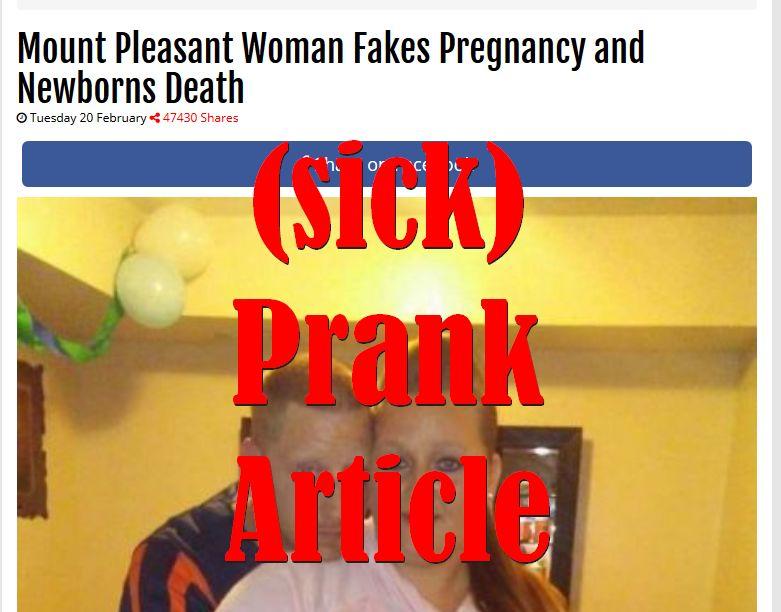 The whole story is almost certainly a sick prank by a close acquanintance given the nature of the accusations in the text, the fact that the photo doesn't appear to have been used elsewhere online (so it was likely stolen from a private profile) and the fact that the article appears to be an original text written for the occasion.

The story managed to rack up almost 1,500 Facebook engagements in a day, something which has been quite unusual for pranks on react365.com recently: in the past few months postings to the site seem to have been limited to a few dozen engagements each at most.

All stories carry following disclaimer at the bottom of the page:

This website is an entertainment website, jokes are created by users. These are humourous jokes, fantasy, fictional, that should not be seriously taken or as a source of information.

Based on that alone we feel confident in saying this story is fake news.