Was Taylor Swift spotted on a date with Colin Kaepernick? No, that's not true: the latest hoax about Swift was just the product of the imagination of a liberal satire weblog that likes to wind up Trump supporters and conservatives with stories guaranteed to get them mad enough so they will like and share them without checking if they are actually true. None of it is real.

The story originated from an article published by America's Last Line of Defense on October 9, 2018 titled "It All Makes Sense: Taylor Swift Busted On Date With Traitor Colin Kaepernick" (archived here) which opened:

Taylor Swift destroyed her career yesterday by coming out to back the Democrat party of losers. Nobody could understand why. Her post on Instagram looked like a leftist cult member wrote it. Freedom of choice and the gays are all well and good, but they don't belong in your job.

Today, the truth has come out. A photographer snapped 14 pictures of Taylor Swift and Colin Kaepernick last night at Klub Karl in downtown San Fransisco. The club is a known socialist hangout. The photographer was spotted and searched and his camera was destroyed but he was able to get a headshot of Swift with his phone, proving she was at the infamous club. The wall behind her is unmistakable.

It All Makes Sense: Taylor Swift Busted On Date With Traitor Colin Kaepernick

Look at the club she's at. Disgusting.

So we checked out the picture that went with the story. As reported by hard-hitting investigative website E! the picture was taken in New York City where she visited a movie premiere at Alice Tully Hall:

The 28-year-old pop star avoided the red carpet and was spotted leaving the venue through a back door, while she and her beau later rendezvoused outside and headed home

We were even able to geolocate the likely doorway she used on Google Streetview. 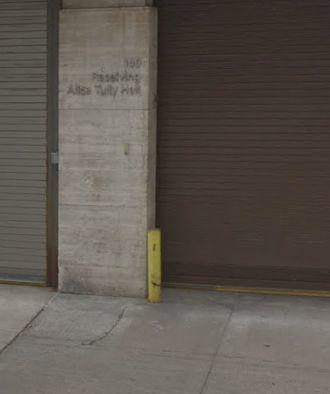 We were also unable to locate a Klub Karl in San Francisco, making the major details of the story impossible. That should come as no surprise though: the site comes with a clear satire disclaimer at the bottom of each article:

NewsGuard, a company that uses trained journalist to rank the reliability of websites, describes trumpbetrayed.us as:

A website claiming to be satirical that publishes fabricated stories, run by Christopher Blair, a known purveyor of disinformation, that published fake stories about Senator John McCain after he passed away.

We wrote about trumpbetrayed.us before, here are our most recent articles that mention the site: