Did actor and conservative commentator James Woods pass away? No, that's not true: his obituary was published by a new liberal satire website run by Christopher Blair on which he is planning to fake kill many more people in the near future. The story is not real, Woods is alive.

The story was the first one the first one to be published on a new site named Conservative Tears, on December 16, 2018 under the title "Celebrating James Woods-He Loved his Country and his President" (archived here) which opened:

James Woods has left our earth far too early. At the ripe age of 76, Woods was just getting started. He was planning a new series with Jon Voight, Tim Allen, and Rush Limbaugh. They were gonna play four kooky guys who knocked over a liquor store. When he heard that Woods had passed late last night, Limbaugh said he would make the show happen in James Woods' honor:

"The one thing James would have wanted was for the three of us left behind to continue with our contracts and get paid. The show itself is mediocre, especially without james, but we have a fiduciary obligation to honor the memory of this great man." 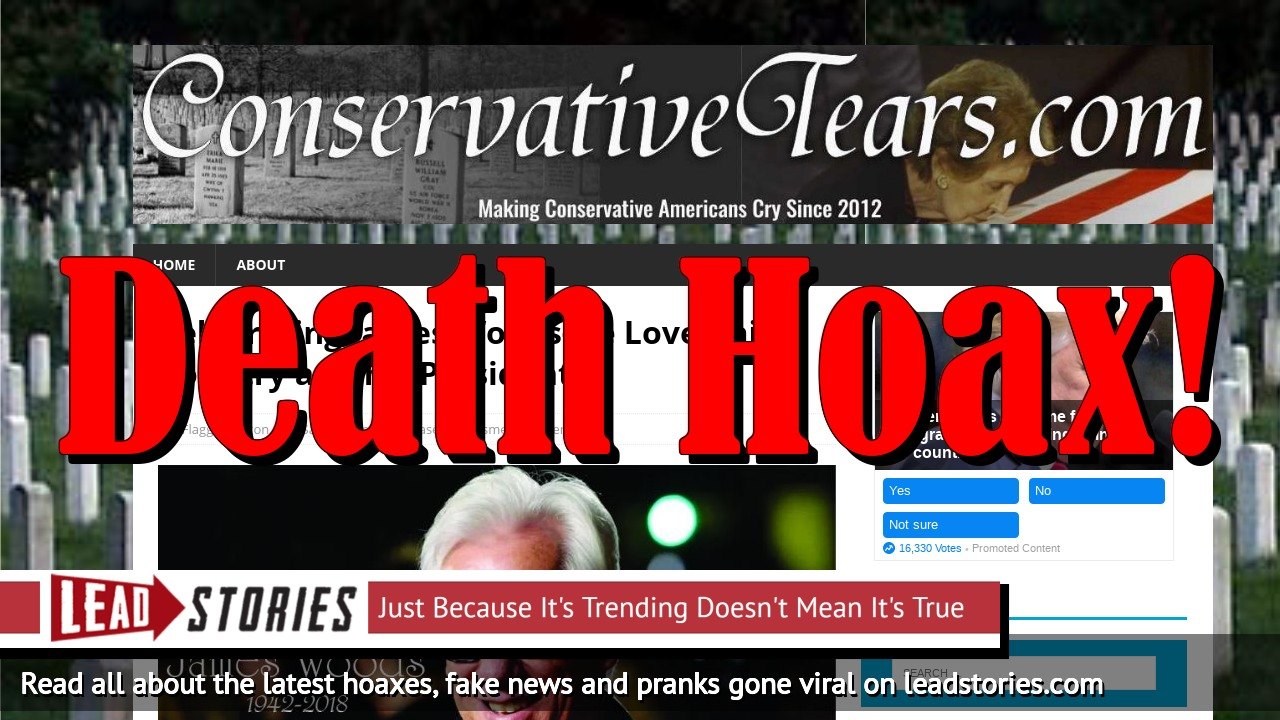 Users on social media only saw this title, description and thumbnail so they might have thought he was really dead:

Celebrating James Woods-He Loved his Country and his President

James Woods has left our earth far too early. At the ripe age of 76, Woods was just getting started. He was planning a new series with Jon Voight, Tim Allen, and Rush Limbaugh. They were gonna play...

But no official announcement was made anywhere else and Woods' Twitter account made no mention of his passing. It did show activity 15 hours ago although it was with a post with a cemetary theme:

The owner and main writer of the site is self-professed liberal troll Christopher Blair, a man from Maine who has made it his full time job to troll gullible conservatives and Trump supporters into liking and sharing his articles. He runs several other websites, including wearethellod.com and bebest.website. Sometimes he is also known under his nickname "Busta Troll". A second man working on the sites is John Prager as revealed in this earlier story we wrote.

Contacted by Lead Stories Blair confirmed the new site was indeed his and he was planning to do more death hoaxes on it:

I'm going to kill many people, yes. They don't necessarily need to be alive to be considered. It should be silly amounts of fun.