Are migrants in Germany running a "Sharia Police" in the streets of Berlin to enforce "sharia law" and to terrorize locals? No, that's not true: an old article mixing together several incidents from years ago keeps getting republished over and over again as breaking news but it misses several key facts.

The story recently reappeared on tvrtinfo.com where it was published on December 28, 2018 titled "IT BEGINS: Merkel's Muslim Migrants Form Sharia Police To Patrol Streets Of Berlin - Terrorize Locals" (archived here) which opened:

A hundred Islamists are now openly enforcing Sharia law on the streets of Berlin, according to local police who are investigating a recent string of violent assaults in the German capital. The self-appointed morality police involve Salafists from Chechnya, a predominantly Sunni Muslim region in Russia. The vigilantes are using threats of violence to discourage Chechen migrants from integrating into German society; they are also promoting the establishment of a parallel Islamic legal system in Germany. German authorities appear unable to stop them.

The Sharia patrol came to public light in May 2017, when Chechen Salafists released a video warning other Chechens in Germany that those who fail to comply with Islamic law and adat, a traditional Chechen code of behavior, will be killed. The video's existence was reported by Meduza, a Russian-language independent media organization based in Latvia. The video, which circulated through WhatsApp, an online messaging service, showed a hooded man aiming a pistol at the camera. Speaking in Chechen, he declared: 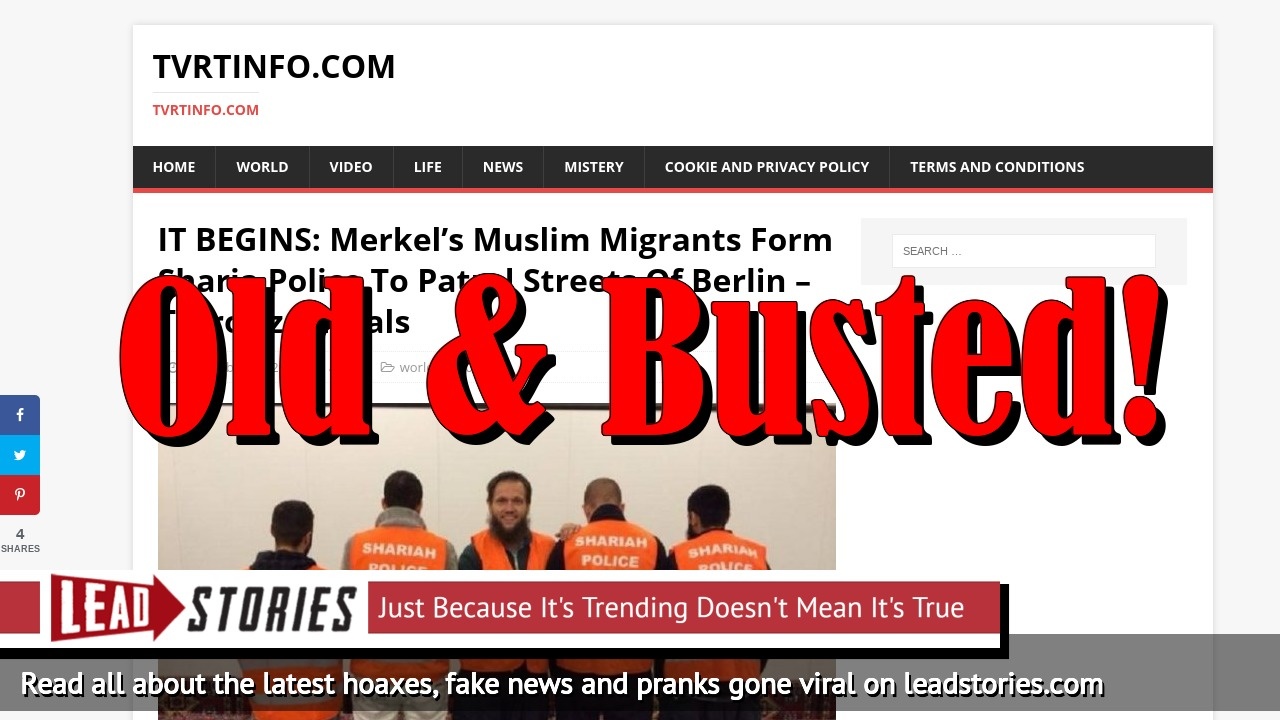 Users on social media only saw this title, description and thumbnail, giving the impression the people in the picture were actively patrolling in Berlin:

A hundred Islamists are now openly enforcing Sharia law on the streets of Berlin, according

The article was actually copied from a 2017 story on the website of the Gatestone Institute:

Threats of violence against "errant" women are viewed as "acts of patriotism." "They have come to Germany because they wanted to live in Germany, but they keep trying to turn it into Chechnya with its medieval ways." - Social worker interviewed by Meduza

That story makes clear it is about an anonymous gang terrorizing the Chechen community in Berlin, not "locals" in general and certainly not "patrolling the streets". The German media report it cites makes it clear a complaint had been lodged against unknown parties so it is quite hard to say how many people were involved, let alone that there were exactly "a hundred islamists" like the tvrtinfo.com version of the story claims.

The picture used by the tvrtinfo.com article is not from Berlin but from Wuppertal and dates back to 2014 when some people briefly appeared on the streets wearing high visibility jackets emblazoned with "Sharia Police". They were tried by a court of law for wearing political uniforms and got acquited at first:

Ultra-conservative Muslim group, wearing orange vests, told people in city of Wuppertal not to drink or play games for money in 2014

The leader of the group, preacher Sven Lau, has been convicted for terrorism related offences and is currently in jail though.

An Islamist preacher found guilty of supporting the Jamwa group of Islamist foreign fighters in Syria has been jailed for five-and-a-half years in Germany. Sven Lau, 36, recruited two fighters and provided the group with money and night-vision goggles. Prosecutors had sought a sentence of a year longer from the Düsseldorf court.

And the verdict acquiting the "sharia police" has been overturned by Germany's highest court early in 2018 so a new trial is expected to be held:

Germany's federal supreme court on Thursday overturned the 2016 acquittal of seven Muslim men who formed a Sharia street patrol in the western German city of Wuppertal, according to its website.

So: the "sharia police" did not patrol in Berlin, the leader is in jail and the organization is currently awaiting trial.

NewsGuard, a company that uses trained journalist to rank the reliability of websites, describes tvrtinfo.com as:

One of more than forty sites in a network, all registered in Macedonia, that publish false and plagiarized stories, primarily promoting anti-Muslim and pro-Trump narratives.

We wrote about tvrtinfo.com before, here are our most recent articles that mention the site: