Does Chicago have city ID cards which allow illegal immigrants to vote in local, state and federal elections? No, Chicago's CityKey ID program does not give non-citizens a way to illegally cast ballots when they otherwise would not be able to do so.

An image that has been shared widely on social platforms falsely states that the new Chicago ID program, which is being implemented as of March 2019, would "allow illegal immigrants to vote." An example of the image publshed on Mach 4, 2019, can be viewed here. 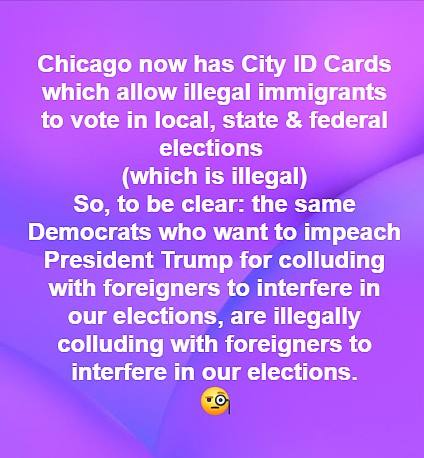 The city-issued ID card is only one of a long list of acceptable forms of identification that will allow a registered voter to obtain a ballot. In addition to the obvious documents, such as a passport or driver's license, the list includes vehicle registration cards, lease, mortgage, deed to a home, credit or debit cards, insurance cards, and union cards, according to the elections board website. Many of those documents are unrelated to citizenship.

The challenge for a non-citizen intent on voting illegally, however, is not at the polling place on election day. It is getting registered in advance so that their name is on the voter list at the polls. While you can register online or by mail, you must prove your identity and residency when you show up to vote the first time. If you don't have a driver's license or a state-issued identification card, your social security number can be used for verification. Without that, you can still confirm who you are with a current photo ID card -- such as the city ID -- or even a utility bill, bank statement, government check or other government document showing your name and address, according to the elections board website.

Thus, Chicago's decision to issue photo ID cards and the local election board's subsequent decision to accept them as official is not a factor in enabling undocumented immigrants who want to vote illegally. There are many other alternatives already available to carry out the crime. The main deterrent to such schemes is the punishment for being caught voting illegally. Claiming to be a citizen in order to vote illegally is a class 3 felony with a maximum sentence of up to five years in prison and it is a crime prosecutors have pursued.

Chicago Mayor Rahm Emanuel intiated the municipal ID card program to allow residents to have one card for accessing the Chicago Public Library and the mass transit system. Card-carriers could also get discounts at local businesses.