Did Kamala Harris sponsor a new bill named "A Second Chance" that would require police officers to call their supervisor befor drawing a weapon? No, that's not true: the story was published by a police satire website as a joke, it is not real.

San Bernardino, CA- In a recent bill presented to the Senate, law enforcement officers would be required to request permission from their shift supervisor before utilizing their service weapon. The bill, titled "A Second Chance", is geared towards "preventing police atrocities." As part of the bill, officers finding themselves in a life threatening situation would first need to call their supervisor and ask before introducing their service weapon into the scenario. Further, the supervisor would then in turn have to call a local civilian committee to discuss the matter so that a community backed decision can be made. These steps would be taken prior to drawing not only their firearm but any other weapon, including tasers, OC spray and batons.

Users on social media might see this title, description and thumbnail:

BNN is your trusted source for fake news.

As you can see it clearly indicates "BNN is your trusted source for fake news", and the site has another disclaimer in the footer that reads:

BNN is your source for law enforcement satire.

However when shared on Facebook the description text with the warning did not appear in at least some cases: 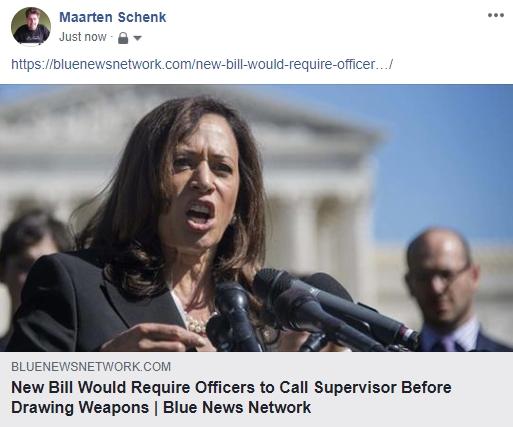 This lead several people to believe the story was in fact real:

So in accordance with our Satire Policy we rate this story "Satire" for the people who didn't get the joke...