It appears the feud between Snopes and self-described internet troll Christopher Blair keeps on going: earlier this week he took to Facebook to announce a new parody website that explicitly takes aim at fact checking website Snopes by using a similar color and logo and which also mimics their article format.

The new site is named Sdopes (archived here) and it appears to have launched on March 1, 2019 according to the publication date in the metadata of the first article. The domain name was registered on January 9, 2019 so it looks like this has been in the works for a few months. 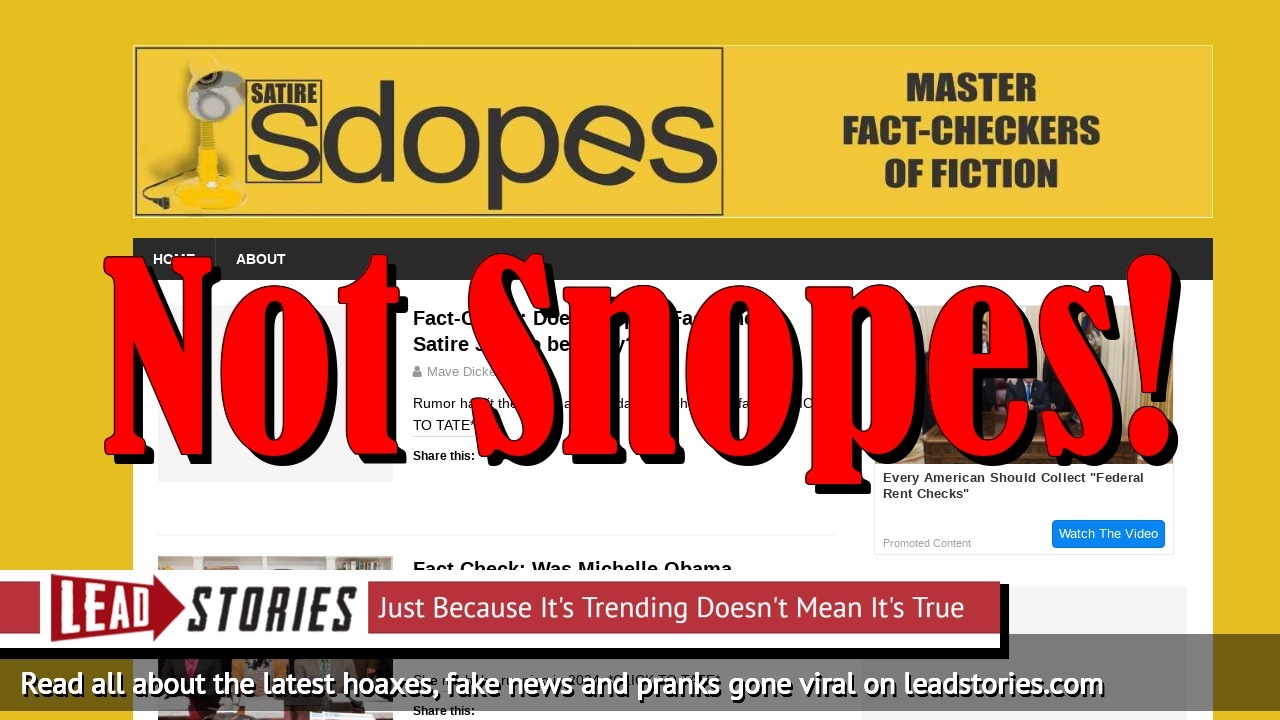 The site comes with an "About" page that has a dedicated paragraph mentioning Snopes:

About Fake News
Call it whatever you like. Just don't call it something it isn't. Don't email us asking for a "source." Don't inform us that our stories aren't true. We have so many disclaimers now that the disclaimers are becoming satirical. We mention the hacks at Snopes in nearly every category. If you can seriously read this stuff and think it can be passed off as real to reasonable people, you need to go out, right now, and buy a sense of humor and a clue.

It also explains the purpose of the site and explains it is part of a bigger network:

Sdopes.com is a subsidiary of the "America's Last Line of Defense" network of parody, satire, and tomfoolery, or as some call it: Junk News. Because they're too stupid to understand what "satire" means.

About Satire
Before you complain and decide satire is synonymous with "comedy":
sat·ire
ˈsaˌtī(ə)r
noun
The use of humor, irony, exaggeration, or ridicule to expose and criticize people's stupidity or vices, particularly in the context of contemporary politics and other topical issues.

This isn't the first time Blair has launched a parody of a fact checking website. As this article at Poynter from April 2018 noted at the time, there used to be a Christopher Blair site called nofakenewsonline.us (now defunct) back in 2018 which was broadly similar in setup:

Snopes is feuding with one of the internet's most notorious hoaxers

That article also contains a passage referencing the ongoing online drama between Christopher Blair and his associate John Prager on one side and Snopes writer Bethania Palma and her brother Sky on the other side:

The founder and editor in chief of Deadstate.org regularly gets into long, rambling Twitter fights with the internet hoaxer and John Prager. He often references their made-up stories as pro-Donald Trump, racist, profit-motivated fake news -- which he says Blair attempts to justify by calling it satire.

But Palma told Poynter in an email that he doesn't think there's an ongoing feud between them.

"If anything, it's a one-sided feud, where Chris Blair constantly rails against Snopes for fact-checking his pseudo-satire pieces," he said. "Despite the disclaimers at the bottom of their articles, their intent was clear: to publish racist and Islamophobic content designed to be widely shared by gullible Trump supporters."

"Palma's brother has had zero impact on us. We view him as a form of entertainment," Prager said.

The other Palma in question is a Snopes reporter -- and therein lies another main source of Blair's beef with the fact-checking project. Bethania Palma has extensively debunked the hoaxer's stories in the past, including one that forced Blair to apologize.

The Twitter fights seem to have resulted in Blair's @bustatroll account being suspended by the service (an archived copy of a short exchange between Palma and Blair can be seen here). Prager's @EvilLiberalPig is still online, you can see his interactions with Palma's @DeadStateTweets here.

That saga seems to be continuing as well: it appears Blair and Prager have also launched (or are in the process of launching) re-state.us (archived here), which looks like it is meant to parody Sky Palma's DeadState.org. At the time of publication there only seems to be one original article (archived here) on the site with the other one being a duplicate of a post on Conservativetears.com, another Blair network site. It appears the domain name was registered on January 23, 2019, about two weeks after sdopes.com.