Did a new study find a link between drinking tequila and losing weight? No, that's not true: a 2014 study by Dr. Mercedes G. López that looked at the effect on mice being fed the sugars found in agave fruit (from which tequila is made) has been widely misinterpreted to mean that tequila helps you to lose weight. But the sugars in question are not even present in tequila because they get converted to alcohol during fermentation.

The story has been repeated by countless publications but it recently went viral again via an article published by Elle on April 26, 2019 titled "It's Official, Drinking Tequila Could Help You Lose Weight" (archived here) which opened:

While it's widely known that knocking back booze racks up a ton of empty calories, a new study has found a link between tequila and weight loss. This is huge news for agave-spirit lovers--and virtually anyone who plans on some more outdoor drinking as the weather heats up.

According to the American Chemical Society, which researched the effects of tequila on blood glucose levels last year, sugars found in the plant that makes tequila can help lower your blood sugar. The sugars that naturally occurs in the agave plant are called agavins--not to be confused with agave syrup--and are non-digestible, so they won't raise your blood sugar. 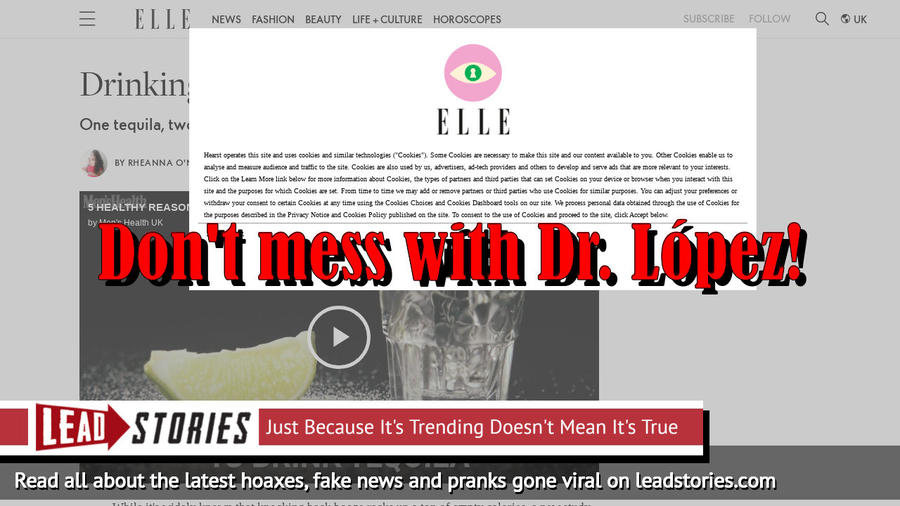 It's Official, Drinking Tequila Could Help You Lose Weight

That clearly implies drinking tequila helps with weight loss and it uses links to the press releases about the study to back it up:

A sweetener created from the plant used to make tequila could lower blood glucose levels for the 26 million Americans and others worldwide who have type 2 diabetes and help them and the obese lose weight, researchers said here today.

DALLAS, March 16, 2014 - A sweetener created from the plant used to make tequila could lower blood glucose levels for the 26 million Americans and others worldwide who have type 2 diabetes and help them and the obese lose weight, researchers said here today.

These articles explain the potential of agavins (the sugars found in the plant used to make tequila) for lowering blood sugar and for helping with weight loss. But they also contain this paragraph:

Of course, the agave's claim to fame is as the plant from which tequila is made. López explained that agavins are the only carbohydrates used to produce the drink. All ethanol in tequila comes from the fermentation of glucose and fructose generated after agave pines are cooked. But because the agavins are converted to ethanol, agavins are not found in the finished product.

In other words, the stuff that supposedly has these benefits is not even present in tequila. And it wasn't tested on humans, only on mice.

Despite this there have been dozens of articles over the past five years that make the claim tequila will help you lose weight based on this study. All of this to the frustration of Dr. López who saw her research being used to promote excessive drinking. It got so bad that when a Belgian television show named "Factcheckers" did a segment on the story in 2019 they created a video clip to help clear her reputation: