Did Norway deport Muslims causing the country's crime rate to drop 31 percent? No, that's not true: Norway did increase deportation of immigrants who were sentenced to prison, but Muslims were not targeted and the largest number deported were from eastern European countries. The crime rate in Norway -- which was already low compared to the United States -- has dropped over the past several years -- just as it has in the United States.

The story first appeared in 2014, but was recently copied word-for-word and posted as if new in an article published on June 17, 2019 titled "Norway Waking up..Norway Deports Muslims; Crime Rate Drops 31%" (archived here) which opened:

Oslo, Norway: "The world's largest gang of thugs, murderers, and rapists is masquerading as a religion of peace," says Adrian Stavig, a resident of Oslo.

Beginning this past January, the new Norwegian Prime Minister, Erna Solberg began a program which targets and deports Muslims who have ties to radical groups.

Something stunning occurred: the country's violent crimes are down more than 31% in less than a year since Muslim deportations began!

Oslo, Norway: "The world's largest gang of thugs, murderers, and rapists is masquerading as a religion of peace," says Adrian Stavig, a resident of Oslo. Beginning this past January, the new Norwegian Prime Minister, Erna Solberg began a program which targets and deports Muslims who have ties to radical groups. Something stunning occurred: the country's ...

The story suggested that Norway's (fictional) experience with deporting Muslims could be an example for other countries:

Liberals everywhere are crying "Racism!" Al Jazeera has blasted Solberg relentlessly for her so-called "Islamophobia", but she has pressed on by deporting any Muslims who belong to radical mosques or threaten violence against "non-believers" -- and sent their entire families home too.
While many in America would say this is racist, it's worked in dramatic fashion. Violent crimes are down more than 31% in Norway.
What a shocker.

Perhaps the rest of Europe and the United States could learn a lesson or two about radical Islam here. Deport the radicals, keep the moderates, and everybody wins.

This 2019 story is identical to an article published on November 15, 2014, by a now-defunct website PoliticalEars.com. That story titled "IS ANYBODY SURPRISED? NORWAY DEPORTS MUSLIMS, CRIME RATE DROPS 31%" is now offline, but it is archived here and below is a screenshot: 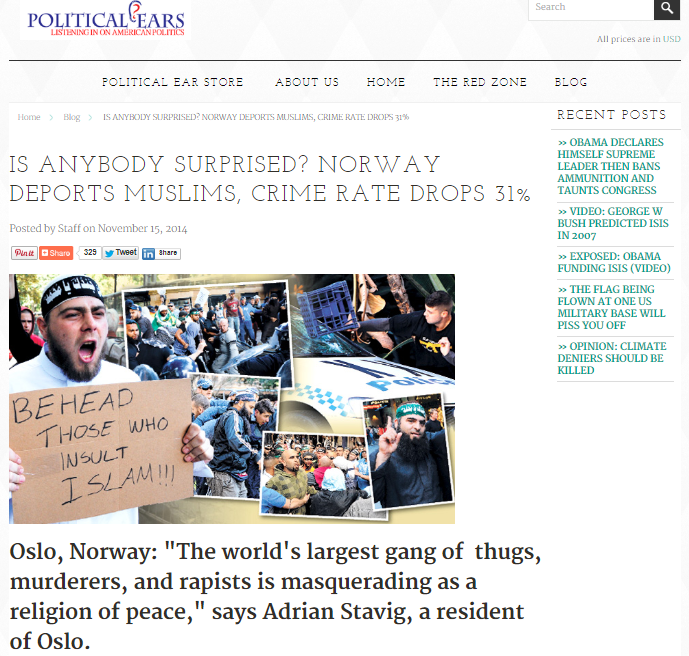 The truth about Norway's immigrant deportation program can be found in a report from the Library of Congress titled "Norway: Government Plans to Crack Down on Returning Foreign Convicts" published on March 11, 2013.

The Norwegian government is reforming two aspects of immigration policy related to foreign convicts in the country. As reported on February 22, 2013, the Ministry of Justice and Public Security is formulating changes in the law in order to send returning foreign convicts back out of Norway and to enhance punishments against the offenders.
On June 7, 2011, the Norwegian Parliament ratified legislation to accord the police extended powers to send foreign inmates back to Latvia, Lithuania, and Romania, under bilateral agreements signed with these countries.

It targeted "foreign convicts," not Muslims. In fact, only one majority-Muslim country -- Iraq -- was among the top five origins of the deported convicts, the report said:

Norwegian Broadcasting reported in June 2011 that about 30% of convicts serving prison terms in Norway were foreign citizens, with those from Poland leading the list, "followed by Lithuania, Nigeria, Iraq and Romania."

The Norwegian newspaper Aftenposten reported that, in 2011, 794 foreign convicts were deported, based on an innreiseforbud, a formal order disallowing re-entry to Norway. In 2012, similar orders were issued for another 1,019 foreign convicts, as part of a concerted government effort to enforce the law allowing expulsion when foreigners have committed crimes.

Sweden tops the list of countries the deportees were sent to with 512 people. Then Italy follows with 394, Poland with 333, Romania with 267 and Russia with 261 people.

Poland and Russia are at the top of the statistics of the citizenship of the emigration with 284 citizens each. Ukraine is in third place with 278 emigrants, followed by Albania with 272 and Romania by 266.

Individuals with citizenship from these five countries alone account for almost one-third of the forced deportations so far this year.

Crime rates have been dropping in Norway, but the 31 percent decline cited in the story is not based on fact. The U.S. Department of State's most-recent assessment of crime in Norway said:

There is minimal risk from crime in Oslo. Norway has a relatively low level of crime in comparison to the U.S. and most of Western Europe. The total amount of crime reported in Oslo for 2017 decreased from 2016 by 5.6%.

The majority of the criminal cases reported to the police continue to be theft-related incidents. In Oslo and the other major urban areas, crime centers on the inner city and high-transit areas. Instances of pickpocketing and petty theft are common in the major tourist areas, hotel lobbies, and in the areas around train and transit stations. Most hotels and tourist areas are located within walking distance of Oslo's higher crime areas, making instances of property crime and/or petty theft more likely to occur.

Thefts are the overwhelming majority of cases reported. There were 94,887 reports of theft in 2017, a 9.8% decrease from the previous year. Violent and weapons-related crimes (including physical/non-physical threats) increased 4.3% from 34,969 reports in 2016 to 36,687 in 2017. These crimes usually occur in areas known to have drug trafficking and gang problems, such as certain parts of Eastern Oslo and elsewhere. Sexual crimes increased the most (11%) from 7,079 reports in 2016 to 7,986 in 2017. Some of the increase in attempted rape and rape statistics is due to of changes to criminal sexual conduct laws.

Organized crime does operate in Norway, but on a small scale. Drug trafficking, petty theft, and home burglary rings typify organized crime, which is often associated within immigrant youth communities or transiting criminal rings from outside of Norway. Reports of crimes involving drugs decreased 6.7%, from 50,293 reports in 2016 to 46,930 in 2017.

NewsGuard, a company that uses trained journalist to rank the reliability of websites, describes trump-feed.com as:

A conservative site that re-posts stories from other sites without credit, including many that are false.

We wrote about trump-feed.com before, here are our most recent articles that mention the site: