Is a new drug named "strawberry quick" being handed out by drug dealers to school kids and does it cause horrific mouth sores or warts? No, that's not true: an old drug scare from 2007 caused by police seizeing some methamphetamines that had been flavored and colored in various ways was combined with a picture from a medical journal that showed a little girl from South Africa suffering from some kind of oral warts as a side effect of an AIDS infection.

(Warning, the rest of this fact check has some gross pictures that some people might want to skip)

An example of the story can be found in this post (archived here) but multiple variations exist. It had an image with following text:

New drug in Schools...
Please pass this on even if you do not have kids in school. Parents should know about this drug.This is a new drug known as 'strawberry quick '.There is a very scary thing going on in the schools right now that we all need to be aware of.There is a type of crystal meth going around that looks like strawberry pop rocks (the candy that sizzles and 'pops' in your mouth). It also smells like strawberry and it is being handed out to kids in school yards. They are calling it strawberry meth or strawberry quick.Kids are ingesting this thinking that it is candy and being rushed off to the hospital in dire condition. It also comes in chocolate, peanut butter, cola, cherry, grape and orange.Please instruct your children not to accept candy from strangers and even not to accept candy that looks like this from a friend (who may have been given it and believed it is candy) and to take any of such, they may have to a tell their teachers, principals, etc. immediately. Pass this on to as many people as you can (even if they don't have kids) so that we can raise awareness and hopefully prevent any tragedies from occurring..!!

The strawberry quick meth myth is so old it has its own Wikipedia entry:

Strawberry Quik meth was a drug scare which primarily took place in 2007. Drug dealers were allegedly using coloring and flavoring to disguise methamphetamine as Strawberry Quik, thus making them more appealing to children. The story was widely reported in the media, but no cases of children using flavored meth have been verified and it is just a prank and/or a media scare.

The story of the horrific warts picture is completely unrelated: 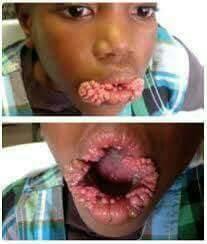 Reverse image search revealed the image was once used in this article (archived here):

A 6-year-old girl presented to a clinic in South Africa with a 1-year history of verrucous papules on the lips and oral mucosa extending to the surrounding skin, consistent with human papillomavirus (HPV) infection. The girl also had numerous asymptomatic, flat-topped, pigmented papules on her face and neck consistent with verruca plana.

The current version of the article doesn't seem to have the image anymore but a version stored by the Internet Archive still had the filename of the image hidden in the page source code: "Screen_Shot_2015-05-06_at_1.57.33_PM.png". And searching that in Google returned a listing from a site that (among other things) lists pictures of "HIV Warts" and this image can be found on that page, attributed to the Consultant360 page with the medical article above..