Did a new study find smoking marijuana causes "complete remission" in patients with Crohn's disease and did it do all that without side effects? No, that's not exactly true: the "new" study dates back from 2013, it only compared 11 cannabis-smoking patients with 10 non-cannabis smoking patients (since it was just a limited pilot study) and while there were indeed some cannabis-smoking patients who achieved "complete remission" (not all of them) their symptoms returned after the trial ended. There were also several side-effects reported ("sleepiness", "nausea" and "confusion"). The study authors indicated several results were not statistically significant enough to draw definitive conclusions due to the low number of participants in the study.

The story has been copied by several websites over the years but a version published by a site named "UK Health Expert" on September 21, 2019 recently went viral again, titled "Smoking Marijuana Causes 'Complete Remission' Of Crohn's Disease, No Side Effects, New Study Shows - UK Health Expert" (archived here) which opened:

Marijuana - scientific name "cannabis" - performed like a champ in the first-ever placebo-controlled trial of the drug to treat Crohn's Disease, also known as inflammatory bowel disease.

The disease of the digestive tract afflicts 400,000 - 600,000 people in North America alone causing abdominal pain, diarrhea (which can be bloody), severe vomiting, weight loss, as well as secondary skin rashes, arthritis, inflammation of the eye, tiredness, and lack of concentration.

Smoking pot caused a "complete remission" of Crohn's disease compared to placebo in half the patients who lit up for eight weeks, according to clinical trial data to be published the journal Clinical Gastroenterology and Hepatology.

Marijuana - scientific name "cannabis" - performed like a champ in the first-ever placebo-controlled trial of the drug to treat Crohn's Disease, also known as inflammatory bowel disease. The disease of the digestive tract afflicts 400,000 - 600,000 people in North America alone causing abdominal pain, diarrhea (which can be bloody), severe vomiting, weight loss, as ...

Let's look at some of the claims in the article, the most obvious one first:

Is this really a "new study"?

The original study (full text here) came out in 2013 and was labeled as "prospective", i.e. intended to do a limited test to see if something is worth investigating further:

BACKGROUND & AIMS: The marijuana plant Cannabis sativa has been reported to produce beneficial effects for patients with inflammatory bowel diseases, but this has not been investigated in controlled trials. We performed a prospective trial to determine whether cannabis can induce remission in patients with Crohn's disease.

So it isn't very new.

Smoking pot caused a "complete remission" in half the patients

This is indeed what the summary of the study says in the methods and results sections:

METHODS:
We studied 21 patients (mean age, 40 ± 14 y; 13 men) with Crohn's Disease Activity Index (CDAI) scores greater than 200 who did not respond to therapy with steroids, immunomodulators, or anti-tumor necrosis factor-α agents. Patients were assigned randomly to groups given cannabis, twice daily, in the form of cigarettes containing 115 mg of Δ9-tetrahydrocannabinol (THC) or placebo containing cannabis flowers from which the THC had been extracted. Disease activity and laboratory tests were assessed during 8 weeks of treatment and 2 weeks thereafter.

But there are several important points that need to be made with respect to these results. Only 21 people were included in the test and only 11 of them got the cannabis treatment. As the researchers themselves point out further in the paper, in the "discussion" section:

The primary end point of this study was induction of remission. Although 5 patients in the study group and 1 patient in the placebo group entered clinical remission, the difference did not reach statistical significance, possibly because of the small sample size. However, our data showed that 8 weeks of treatment with THC-rich cannabis, but not placebo, was associated with a significant decrease of 100 points in CDAI scores.

In this trial, cannabis induced clinical remission in 50% of patients. Taking into account that our participants had long-standing Crohn's disease, with 80% nonresponse or intolerance to anti-TNF-α, this result is impressive. In this trial, the observed improvement was solely symptomatic, with no objective evidence of reduction in inflammatory activity. In addition, patients relapsed 2 weeks after cannabis treatment was stopped. Therefore, based on the available data, one cannot argue that cannabis is a successful treatment for the inflammatory process in Crohn's disease. Thus, until further studies are conducted, cannabis should be reserved for compassionate use only in patients who have exhausted all other medical and surgical options.

In other words, the researchers themselves indicated the study was too small to draw definitive conclusions and they also noticed that patients relapsed after the treatment was stopped so it didn't seem like smoking cannabis was an effective solution to cure the inflammatory activity from Crohn's disease.

Were there really no side effects?

There was no difference between study and placebo groups in side effects, including sleepiness, nausea, and confusion. However, the study group reported significantly less pain, improved appetite, and a higher satisfaction from the treatment (Table 4). 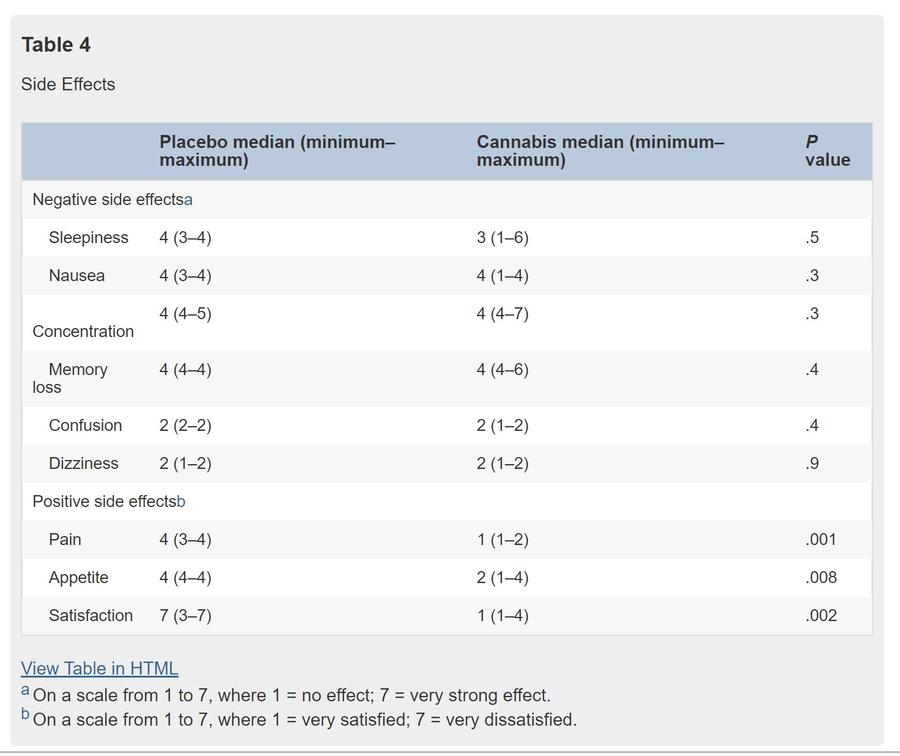 That indicates there were people in both groups who experienced at least some side effects.

Other issues with the study

As the researchers pointed out in their paper, there were some problems with the setup of the study too: in a proper "blind" study where some patients get a real treatment and others get an inactive placebo in order to compare the results it is vital that the patients do not know if they are getting the placebo or the real treatment. However this seems to have gone wrong in this study:

Blinding assessment was performed at the end of the study for each patient. Except for 2 patients in the placebo group, all other patients were able to tell correctly whether they were receiving cannabis or placebo.

Getting your hopes up because of one old, very limited study that did not prove the effectiveness in treating the inflammatory activity of Crohn's disease would not seem warranted.