Did Bill Gates admit in a CNN interview that vaccinations are intended to reduce the world's population? No, that's not true: The Microsoft founder was talking to CNN's Dr. Sanjay Gupta in 2013 about his investment in delivering child vaccinations to third world countries with the goal of saving lives. Gates said that reducing population growth is one of the benefits of saving child lives with vaccines. He explained in another interview that reducing child mortality rates in third world countries could cause parents to have fewer children. Gates never "admitted" that the goal of vaccination was to reduce population.

The false claim originated from a video (archived here) published on YouTube on September 30, 2013 under the title "Vaccination - to reduce population! (Bill Gates admits)." It was repeated in stories, including an article published in January 2016 titled "Bill Gates Admits 'Vaccines Are Best Way To Depopulate" (archived here) which opened:

Bill Gates has openly admitted that vaccinations are designed so that governments can depopulate the world.

Gates says that in order to successfully depopulate an "overcrowded world" at least 350,000 must be killed each day, and he says this can be done via vaccine programs. 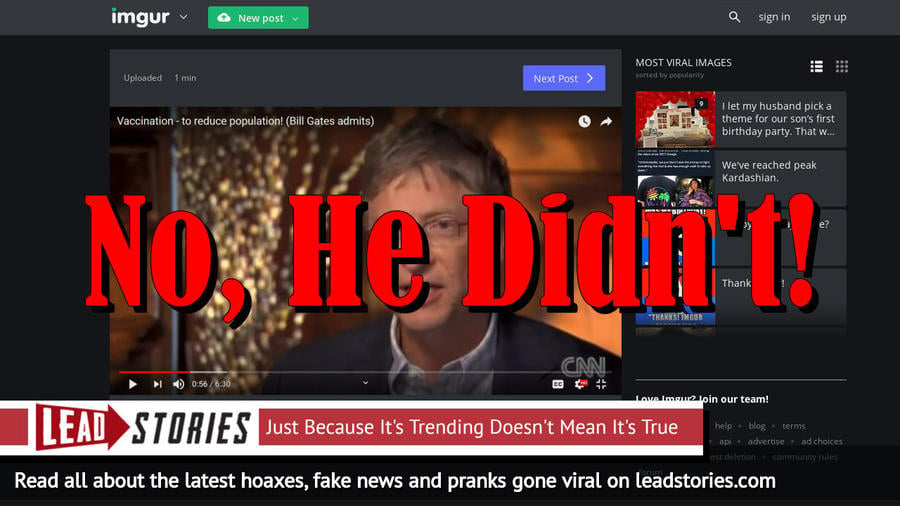 Claims that Gate's "admitted" funding a global vaccination campaign as a way to "depopulate" the earth or "reduce" global population is a twisted and false interpretation of what the billionaire philanthropist told Dr. Gupta and others in several interviews. These claims all track back to the YouTube video posted above, in which Gupta had this exchange with Gates:

Dr. Sanjay Gupta: Ten billion dollars over the next 10 years to make it the year of the vaccines. What does that mean exactly?
Bill Gates: Well, over this decade, we believe unbelievable progress can be made, both inventing new vaccines and making sure they get out to all the children who need them. We could cut the number of children who die every year from about nine million to half of that if we have success on it. The benefits are there in terms of reducing sickness, reducing the population growth. It really allows a society a chance to take care of itself once you make thatt intervention.

Gates said that benefits of child vaccinations include "reducing population growth," not that it was the reason for the vaccinations. Also, reducing the rate of growth is not the same as "depopulation," which would mean a total reduction, or reducing the number of people. Gates was clearer in another video posted on his own YouTube channel on August 21, 2012 when asked about how population growth in third world countries could be addressed. He replied:

What we need to do is take this aid generosity and this innovation and go into those places, offer the women better tools where they want to space birthing or have a smaller family size an improve health because, amazingly, as children survive parents feel like they have eno'llugh kids to support them in their old age and so they choose to have less children.

The original publisher of the false claim story, which was stolen and copied many times over by other websites, added this correction to their version after realizing it was wrong:

Correction: An earlier version of this article stated that Bill Gates had admitted that vaccinations were a way to help depopulate the planet. The basis for this were a series of quotes, misinterpreted and taken out of context. Bill Gates did not admit that vaccinations are a method for depopulating the planet. On the contrary, Gates is interested in keeping people alive via vaccination programs.