Does the photo below show a woman who had 11 babies? No, that's not true: a viral image combined two unrelated photographs, one showing a woman from Mexico who was operated for a huge tumor and the other showing eleven babies born in India on the same day but not from the same parents.

The combined image appeared in a Facebook post (archived here) where it was published on August 22, 2015 with a caption that read: 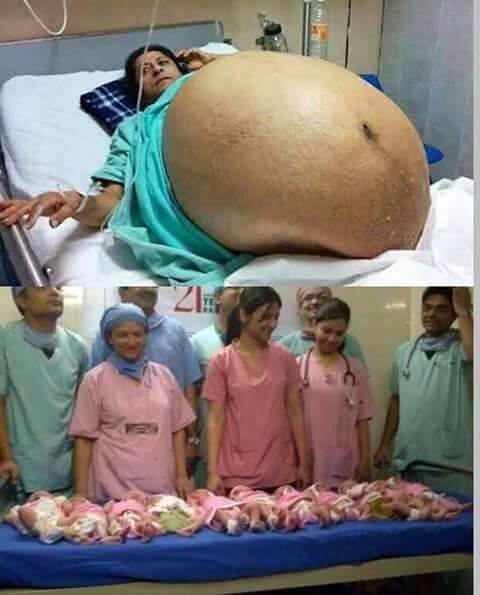 The first image shows a woman in Mexico named Mercedes Talamantes who had a 60 kilo (132 pound) tumor removed:

The second image, as Snopes already pointed out in 2012, shows eleven babies born in the same hospital on the same day in India, November 11, 2011:

According to the Times of India the babies were the result of an I.V.F. procedure and they were all scheduled to be born on the special date:

SURAT: A city-based In Vitro Fertilization ( IVF) centre will undertake operations on 11 would-be mothers to schedule the births of their babies on Friday, 11-11-11. About 30 women had conceived through IVF nine months ago at the 21st Century Hospital in the city.

Yet here we are, seven years later, and the images are still going viral with a wrong caption...