Did Dr. Phil say on his show that women who support President Trump are damaged? No, that's not true: The story was published by a liberal satire website that tries to mislead Trump supporters and Republicans into sharing made up stories that are clearly marked as satire when you actually click them. Articles from the site are frequently copied by foreign-run fake news websites, and that is exactly what happened with this one. The people liking and sharing these stories are enriching foreign website operators or a liberal from Maine via the ad revenue generated with the content which is probably not what they expected or wanted.

The story originated from an article (archived here) where it was published by BustaTroll.com on Oct. 23, 2019, under the title "Dr. Phil: 'Women Who Support Trump Are Damaged'". It opened:

Well-known talk show psychiatrist Dr. Phil McGraw is no stranger to blunt diagnoses. As Oprah's guy pal and with a hit show, bestselling books, and successful all-nude soccer team franchise, McGraw has been riding the high life. That may all change with a bang after last week.

Dr. Phil often gets referrals from his associate Dr. Teeth. Janice is in rehab for the 60th time.

During a show titled : "Sophie's Choice", Phil met Sophie Baggersqueef of Diabetes, Florida, a housewife who had become more and more estranged from her husband of 20 years due to political differences. Ever since the last election, her husband Jonathan, a normal person, wanted nothing to do with Sophie, who had cast her vote for President Trump. 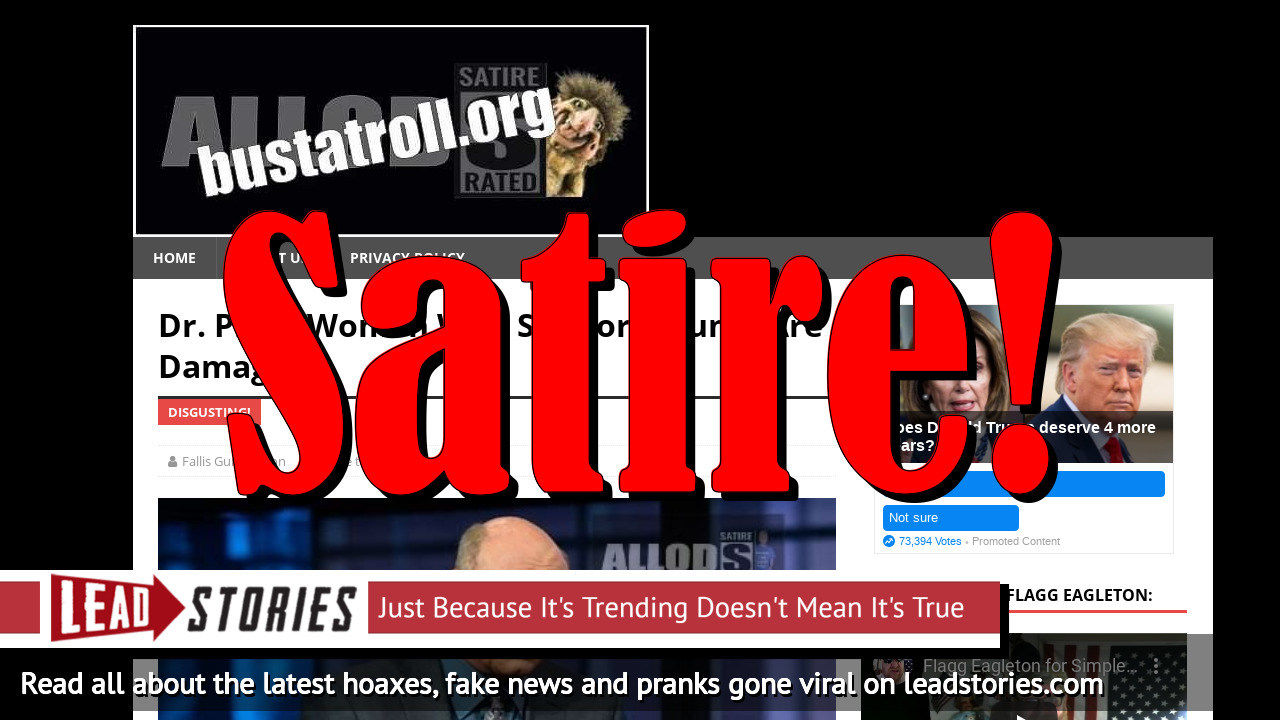 Dr. Phil McGraw, who gained fame on Oprah Winfrey's talk show before taking on his own program, never made such a statement. The claim is false and was clearly labeled as satire on BustaTroll.com's site. But some sites have picked it up and pushed it out to gain traction without any reference to the story's satirical nature.

The story claims, satirically, that Dr. Phil wrapped his show with this quote:

"Sophie, first of all, any woman who supports Donald Trump is damaged. Okay? No poor husband wants damaged goods. Women who would lower themselves to the level it takes to admire that mental midget of a con man have zero self-esteem. Zero. It's not even a matter of how stunningly stupid you must be. It's a matter of betraying your vagina. Your vagina is George Washington, Sophie, and you are Benedict Arnold. Your vagina is angrier than Mike Pence losing his wallet at a Chippendale's club. Stop being your vagina's Ike Turner."