Did former U.S. President Barack Obama announce that he will enter the race to become Kenya's new president in 2021? No, that's not true: This is a work of satire, everything is made up, and Obama is currently working to lift the Democratic party in the United States.

The claim originated from an article published by World News Daily Report on January 14, 2020, titled "Barack Obama announces intention to run as president of Kenya in 2021" (archived here) which opened:

In a surprise announcement that could upset African politics for years to come, former American President Barack Obama has confirmed this morning his candidacy in the 2021 Kenyan presidential campaign.

Son of a Kenyan senior governmental economist, Barack Hussein Obama Sr., the politician who served as the 44th President of the United States from 2009 to 2017 is actually touring Africa to give a series of conferences.

While visiting the Kenyan port city of Mombasa, he was greeted by a large and extremely enthusiastic crowd, loudly cheering and chanting his name.

Mr. Obama drew an almost ecstatic roar from the crowd when he made the announcement that he was returning to politics. 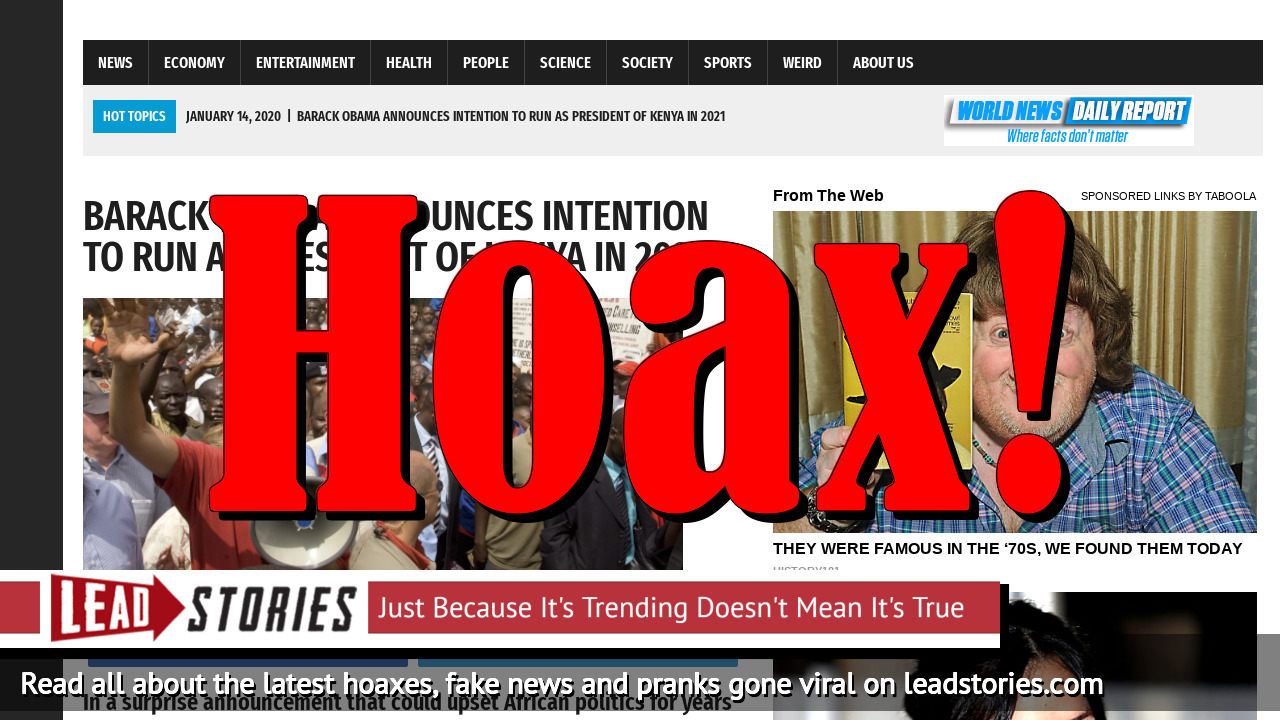 In a surprise announcement that could upset African politics for years to come, former American President Barack Obama has confirmed this morning his candidacy in the 2021 Kenyan presidential campaign. Son of a Kenyan senior governmental economist, Barack Hussein Obama Sr., the politician who serve

The joke story went on to (supposedly) quote Obama saying:

I'm a bit disgusted with American politics recently while seeing Kenya struggle. I realized I needed to do something to help my Homeland...I was able to solve the U.S.' worse economic crisis in its history and put it on the right track until they elected a narcissistic reality tv star. I can certainly help Kenya.

The website World News Daily Report is a humor website specialized in posting hoaxes and made up stories. The disclaimer on their website is pretty clear about that, even though you have to scroll all the way down the page to find it:

The site often uses images stolen without attribution from real news websites, sometimes showing real people who have nothing to do with the story. For example, there is this story:

The site is run by Janick Murray-Hall and Olivier Legault, who also run the Journal de Mourréal, a satirical site spoofing the (real) Journal de Montéal. Very often, their stories feature an image showing a random mugshot found in a mugshot gallery, on the internet or on a stock-photo website superimposed over a background of flashing police lights or crime scene tape.