Did a Florida swimmer become partially emasculated after taunting a baby shark with his penis? No, that's not true: The story was fabricated by a Canadian entertainment website that publishes fictional stories about bizarre crimes, weird sexual acts, and other made-up events. The photo accompanying the story was lifted from an article about a real shark attack.

The story originated from an article published by World News Daily Report on December 19, 2019, titled "Florida swimmer partially emasculated after taunting baby shark with his penis" (archived here). It opened:

A Florida man is being hospitalized at St. Mary's Medical Center after being partially emasculated from a severe shark bite.

John H. Bishop, 48, was snorkeling off the coast of West Palm Beach with family and friends when he noticed a small nurse shark swimming nearby.

Bishop apparently heavily intoxicated under the influence of alcohol and believing that nurse sharks posed no threat to humans started dangling his genitals in front of the carnivorous creature. 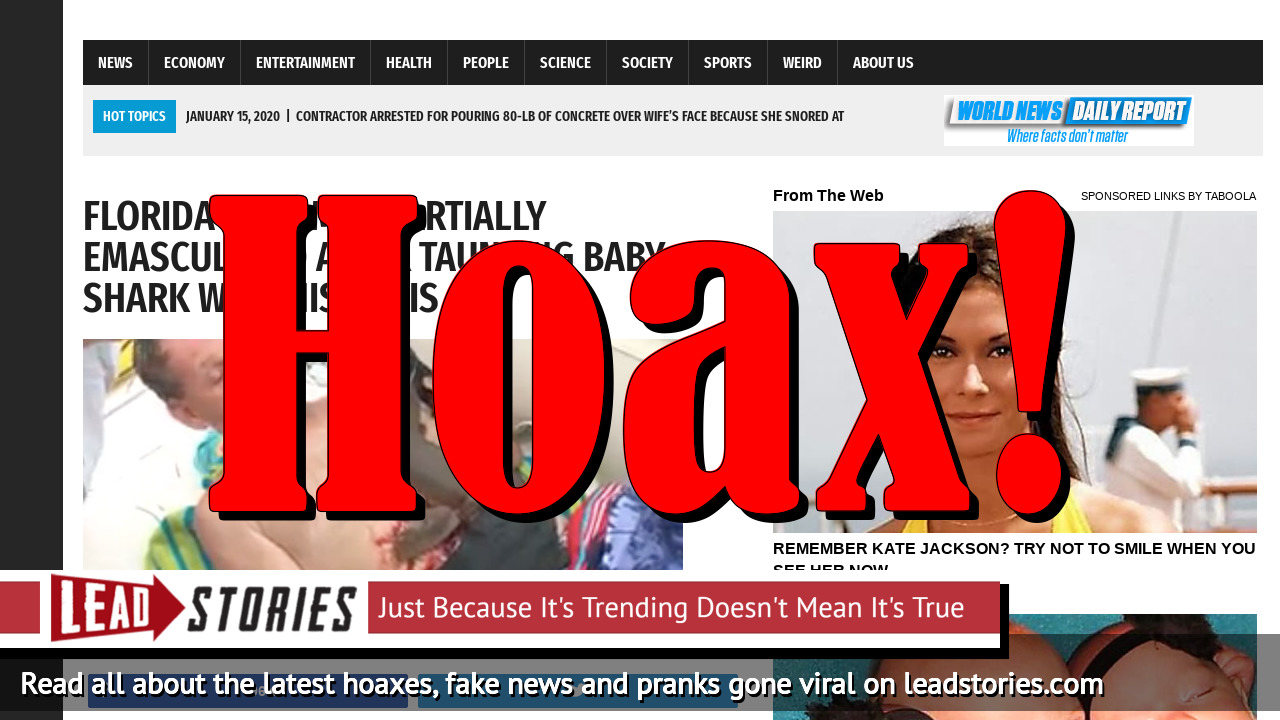 A Florida man is being hospitalized at St. Mary's Medical Center after being partially emasculated from a severe shark bite. John H. Bishop, 48, was snorkeling off the coast of West Palm Beach with family and friends when he noticed a small nurse shark swimming nearby.

The story is a work of satire and not meant to be taken seriously. The article said the man involved in the incident is named John H. Bishop, though a "reverse image search" revealed the same photo was featured in a Daily Mail story from September 27, 2017. In that story, the man is identified as Ervin Maccarty. According to the newspaper, he was swimming off the coast of Marathon, Florida, when a small shark bit his stomach and refused to let go. He survived the incident.

World News Daily Report is a humor website specialized in posting hoaxes and made-up stories. The disclaimer on the website is pretty clear about that even though users have to scroll all the way down the page to find it:

The site often uses images stolen without attribution from real news websites, sometimes showing real people who have nothing to do with the story. For example, here:

It is run by Janick Murray-Hall and Olivier Legault, who also run the satirical Journal de Mourréal, a site spoofing the (real) Journal de Montéal. Very often, their stories feature an image showing a random mugshot found in a gallery on the Internet or a stock photo website superimposed over a background of flashing police lights or crime scene tape.

Articles from the site are frequently copied (sometimes even months or years later) by various fake news websites that omit the satire disclaimer and present the information as real.

NewsGuard, a company that uses trained journalists to rank the reliability of websites, describes worldnewsdailyreport.com as: