Did federal records show that George Soros, a liberal financier, was the biggest funder of the troubled app used during the Iowa Caucus? No, that's not true: The records are actually a donation by Soros to a Super Pac associated with Shadow, Inc., the company that created the caucus app for the Iowa Democratic Party. The Twitter user who posted the claim has since added a "clarification" to his original post, which is still being shared on social media.

The story originated from a post published by Ian Miles Cheong on February 4, 2020, (archived here). It opened:

And there it is. The single largest donor of Shadow Inc., the company behind the failed Iowa Caucus app, is George Soros. 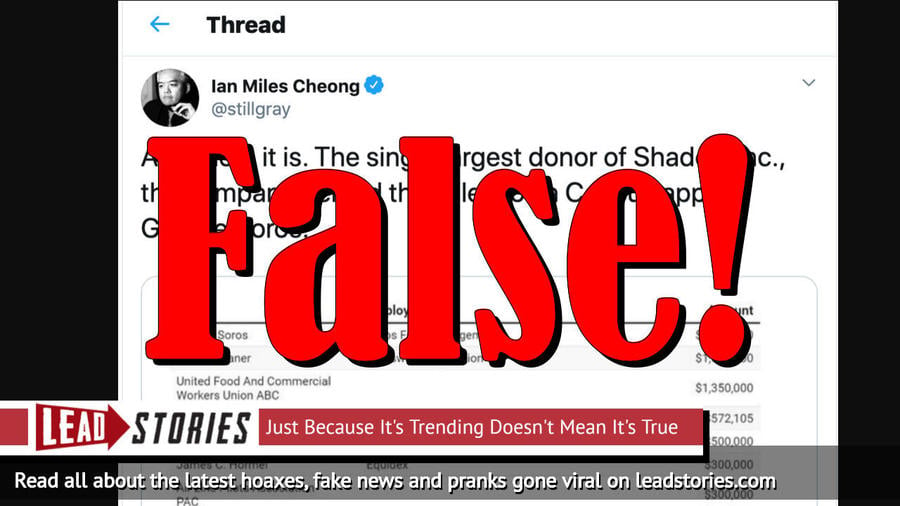 "And there it is. The single largest donor of Shadow Inc., the company behind the failed Iowa Caucus app, is George Soros."

The Associated Press debunked this claim on February 6, 2020. As the AP reported, Soros' donation was not directly made to Shadow Inc.

The chart does not show a donation by Soros to Shadow Inc. Instead, the chart, which was published in a November 2019 online news article, shows Soros gave $2.6 million to the National Democratic Redistricting Committee. Federal tax documents confirm the donations were made in 2018.

The chart of Soros' donation was created to reveal the largest funders of the National Democratic Redistricting Committee from 2017 to June 2019, Alex Kotch, the article's author, confirmed in an email to The Associated Press.

Soros has not directly given to PACRONYM, according to federal campaign finance records.

The Twitter user who made the claim has since added a "clarification" reply to his original post, which is still being retweeted:

Clarification: This is the SuperPAC ASSOCIATED WITH Shadow Inc., NOT Shadow Inc. itself. Now I have to run quality control on my tweets the same way the Democrats did with the Iowa Caucus. https://t.co/4uDTNu5CrJ

Results from the February 3, 2020, Iowa Caucus were delayed for days because of problems with the app that was used to tabulate the results. However, Soros did not help finance the creation of the app.