Did members of the media falsify an FBI intelligence bulletin that warned conspiracy theories are a new domestic terrorism threat? No, that's not true: The FBI has commented to Lead Stories about the document, and multiple members of the media, including The New York Times, NBC News, and The Hill, have all reported on its existence.

The claim originated from a series of tweets published by Praying Medic on February 9, 2020, (archived here). They opened:

I received a reply from the FBI on my FOIA request. They could not confirm the so-called "FBI intelligence bulletin" about conspiracies. They also referred me to the bureau's public bulletin on categorization of terror threats which does not mention conspiracies as a threat. https://t.co/joB7PNp7MA 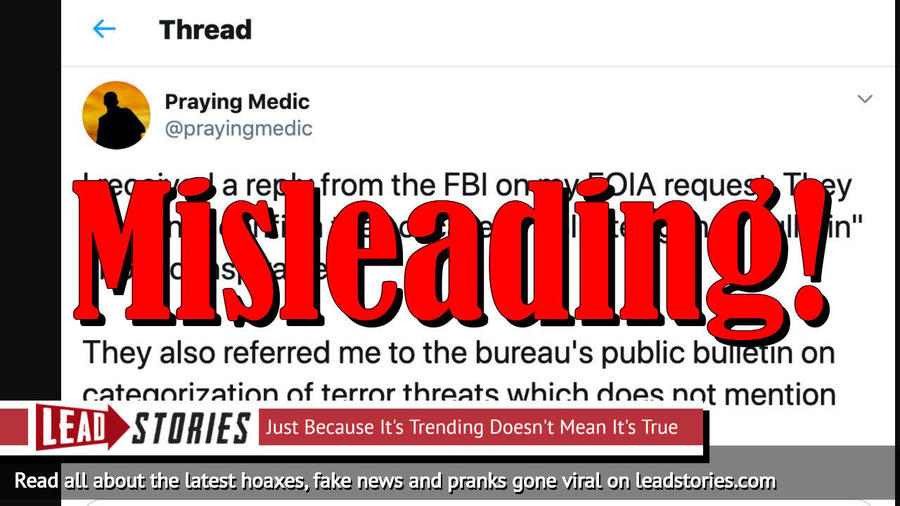 Users on social media only saw this title:

"I received a reply from the FBI on my FOIA request. They could not confirm the so-called "FBI intelligence bulletin" about conspiracies. They also referred me to the bureau's public bulletin on categorization of terror threats which does not mention conspiracies as a threat. https://t.co/joB7PNp7MA"

On August 1, 2019, Yahoo! News was first to report on an FBI intelligence bulletin from the Phoenix field office. Yahoo! News linked to the bulletin, which was to be distributed to law enforcement and not shared with the media.

The intelligence bulletin suggested the FBI was identifying fringe conspiracy theories, such as QAnon, a right-wing, pro-Trump conspiracy, as a "domestic terror threat."

The tweet thread from Praying Medic went on to suggest that the intelligence bulletin was "fake" and claimed the FBI "could not confirm" the existence of the intelligence briefing. He had requested the information through a Freedom of Information Act (FOIA) query.

However, in a statement given to Lead Stories, the FBI said that this is routine procedure:

While our standard practice is to not comment on specific intelligence products, FBI field offices routinely share information with their local law enforcement partners to assist in protecting the communities they serve. These products are intended to be informative in nature, and as such, they contain appropriate caveats to describe the confidence in the sourcing of information and the likelihood of the assessment. Additionally, when written at a local level, these products will note that the perspective offered may be limited to the field office's area of responsibility.

As always, we would encourage you to remember that all FBI investigative activity is conducted in accordance with our Domestic Investigations Operations Guide, the most recent public version of which is available here.

Lead Stories reached out to Steve Moore, former FBI Supervisory Special Agent, who reviewed the document. He said the intelligence bulletin appeared just like hundreds he has reviewed in the past. The briefings are sent out to keep local law enforcement in the loop. Moore said:

It looks completely legit. We used to get those all the time.

Moore added that the bulletin did not imply that all QAnon followers were a threat. He told us:

The FBI was carefully saying that some people - a certain percentage of people who hear a radical thought and a dangerous conspiracy theory - a small radical minority on both sides statistically will be motivated by that to do something.

You have millions of people out there who have extremist views on the right and the left, and your job is to prevent violence and to protect Constitutionally-protected rights. I took both of those things very seriously.

The Twitter user said because the FBI pointed him to resources that only recognize four categories of violent extremism, it proves the bulletin was falsified. He tweeted:

However, the original Yahoo! News article said that the "new focus on conspiracy theorists appears to fall under the broader category of anti-government extremism." So, no new category was created, but one of the four broader areas of focus has been expanded.

Moore also told us that QAnon proponents might be surprised to know that many FBI agents he worked with are more conservative-leaning than liberal. He said:

The people who are very concerned about the FBI overreach on the far-right should really know that the majority of agents who are working those cases, while not far-right are probably right of center, and so they don't have an ingrained desire to simply go in and take out this group because of animus.

The FBI doesn't try to censor thoughts. They try to prevent violence.