Did Joe Biden's presidential campaign selectively edit several soundbites from President Trump in a newly-released advertisement? Yes, that's true, and here is some context: After Twitter labeled a video of Biden that was shared by Trump as "manipulated media," the Trump campaign fired back. It has accused Twitter of bias for not doing the same to a campaign ad Biden's team created earlier this month. Lead Stories has sourced all of Trump's soundbites featured in the ad, and viewers can see that some of the clips are taken out of context.

The Trump campaign is urging Twitter to label a campaign ad published by @JoeBiden on March 3, 2020 (archived here). It opened:

We can't sit by and lose this country to Donald Trump. Today, we take it back - together. Go vote: https://t.co/Hy8C4n0lUk https://t.co/0YgyJFr9YR 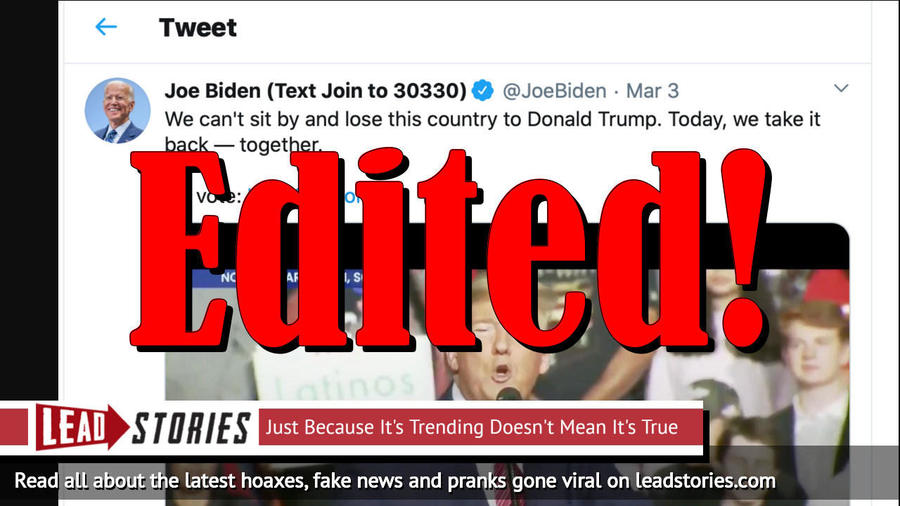 On March 8, 2020, Lead Stories fact checked the video that purportedly showed Biden saying, "We cannot win this election. We can only re-elect Donald Trump." As we noted, the soundbite ended before Biden had completed his thought, which changed the meaning of the sentence. Hours later, Twitter applied a "manipulated media" label to the clip - the first time it had done so since the policy went into effect on March 5, 2020.

Now, according to The Hill, the Trump campaign is urging Twitter to hold the Biden campaign to the same standard and label an ad it posted on social media as "manipulated media." However, Twitter said the ad was posted before its policy went into effect.

In light of the controversy, Lead Stories is giving readers a chance to examine claims from the president's camp that they, too, have been victims of an edited video. In the campaign ad posted on Biden's Twitter account on March 3, 2020, various soundbites from Trump are stitched together and edited out of their full context to create a specific message.

Here are all of Trump's quotes that are featured in the ad in their full context:

"Coronavirus... this is their new hoax."

"The American Dream is dead."

Readers can see that any soundbite that is isolated from its whole can present a slightly different - or entirely new - meaning. For example, the very last quote, "The American Dream is dead" is followed by Trump saying:

But if I get elected president, I will bring it back bigger, better, and stronger than ever before, and we will make America great again.

Fact checkers have previously debunked some of the other suggestions made in the advertisement. For example, Snopes concluded:

Despite creating some confusion with his remarks, Trump did not call the coronavirus itself a hoax.

Other fact checkers have weighed in on Trump's reference to "very fine people" who were at a rally in Charlottesville, Virginia, in 2017. During the event, a group of white nationalists clashed with counter-protesters, and the driver of a car slammed into a crowd, killing one person.

Ever since, Trump's critics have used the reference to suggest he is either a racist or has failed to condemn white nationalism. However, FactCheck.org concluded that Biden was wrong to claim that Trump had not denounced supremacist groups:

But, contrary to Biden's claim, the president twice specifically condemned white supremacists and neo-Nazis, and he has repeated that condemnation since.

PolitiFact uploaded the complete transcript of the news conference in which Trump made the "very fine people" reference so readers can see it in its full context.

The Biden ad features clips from Trump that are not complete thoughts. In at least a couple of cases, the isolated quotes would take on a different meaning if played in full sentences. The challenge of posting a mashup of short soundbites is that they are almost always taken out of context, and they give listeners a different perception of what Trump actually said.