Did Joe Biden, the U.S. Democratic presidential candidate, say, "We cannot win this election. We can only re-elect Donald Trump"? No, not entirely: The video making the rounds has been edited to remove the rest of the sentence to imply that Biden had mistakenly said that only Trump could win the 2020 presidential election.

The claim appeared in a clip (archived here) that has been retweeted tens of thousands of times by users, including Townhall.com, on March 7, 2020. It opened:

"...We cannot get re-elect, we cannot win this re-election, excuse me. We can only re-elect Donald Trump." 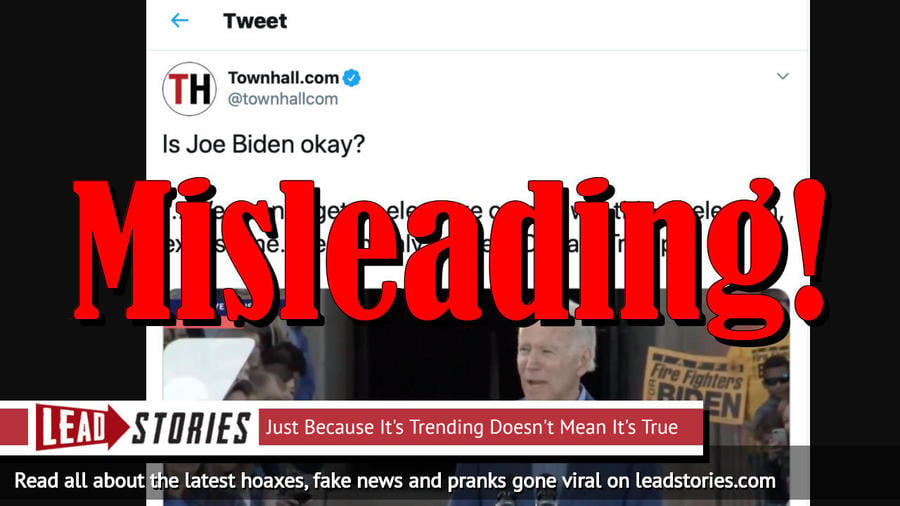 "...We cannot get re-elect, we cannot win this re-election, excuse me. We can only re-elect Donald Trump."pic.twitter.com/VhoaMWP2LO

Newsweek reported that the video of the former vice president's speech in Kansas City, Missouri, on March 7, 2020, was edited to remove the rest of the sentence. In doing so, this distorted the actual meaning of what he was saying. CNN fact checker Daniel Dale has also debunked the claim as a "dishonestly edited video." According to Dale:

The clip was edited to cut out the second part of Biden's sentence. What the former vice president actually said was this: "Excuse me. We can only re-elect Donald Trump if in fact we get engaged in this circular firing squad here. It's gotta be a positive campaign." Biden had called for an end to "negative attacks" in his primary contest with Vermont Sen. Bernie Sanders.

In the video clip, Biden was suggesting that in-fighting within the Democratic Party could help lead to Trump's re-election, not that he was somehow accidentally - or deliberately - conceding the race for the White House. The full video of the speech can be viewed here.

President Trump retweeted the edited video and added, "I agree with Joe!"

Twitter jumped in, tagging the tweet as "manipulated media" in the first use of its new system of discrediting tweets spreading "significantly altered or fabricated" content - a system introduced March 5, 2020. And on Monday, March 9, 2020, Newsweek reported that a Trump lawyer said nothing was wrong with the tweeted video, claiming it was "accurate".

Jenna Ellis, a senior legal adviser to the president, hit back at attacks on Scavino for sharing the video. "Wow. This is an insanely dishonest targeting of @DanScavino," she wrote on Twitter. "The clip was accurate and was A CLIP of Biden's embarrassing gaffe."

She added, "No one from the Campaign or Admin (including the President) was asserting Biden *actually* endorsed @realDonaldTrump. The point is the gaffe. DUH."

Ellis did not note that the president retweeted the clip writing he agreed with Biden's apparent assertion, indicating that Trump did indeed suggest Biden had endorsed him.

Even so, had the video continued to play out, Biden would not have appeared to have conceded the election to Trump, and the sentence would have taken on a completely different meaning.