Is Microsoft founder Bill Gates conspiring with the Vatican to try to depopulate the world with a new vaccine for the novel coronavirus? No, that's not true: The video misinterprets a soundbite from Gates' TED Talk to try to make a point about vaccines. It later launches into an anti-Catholic screed.

The Vaccine Alliance is planning to vaccinate an additional 300 million children from 2021 to 2025. Bill Gates and the Vatican are linking up on May 14, 2020 for Pope Francis's Global Education Pact with World Leaders. US military is working to develop coronavirus vaccine

Print Out of List of Ingredients In Vaccines: https://savinghealthministries.com/wp...

Opting out of vaccinations should not be an option based on some leading medical experts. 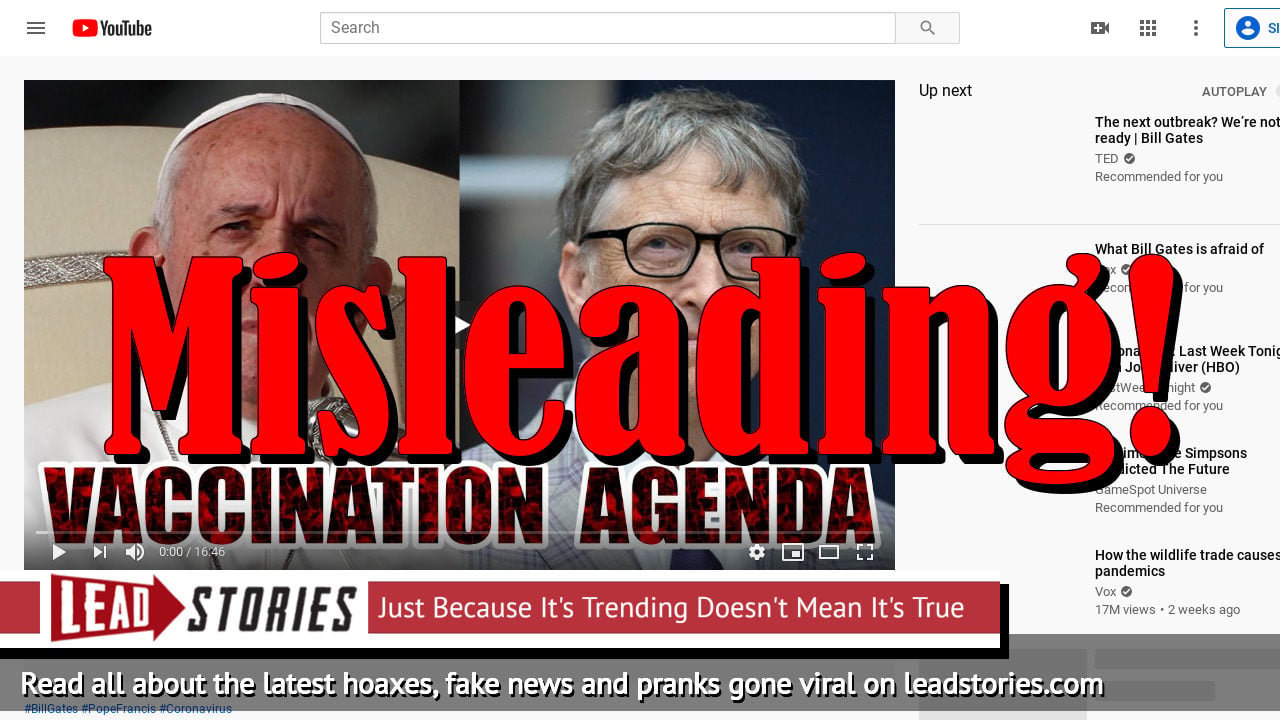 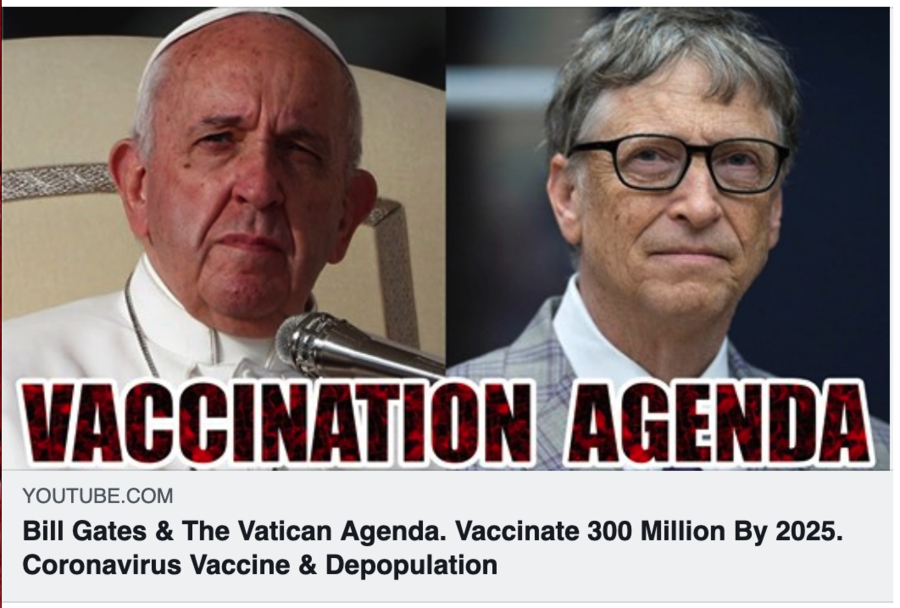 The Vaccine Alliance is planning to vaccinate an additional 300 million children from 2021 to 2025. Bill Gates and the Vatican are linking up on May 14, 2020 for Pope Francis's Global Education Pact with World Leaders. US military is working to develop coronavirus vaccine Print Out of List of Ingredients In Vaccines: https://savinghealthministries.com/wp-content/uploads/VaccineIngredients.pdf Breakthrough: Israeli Scientists Say They'll Have a Coronavirus Vaccine in Just Weeks Opting out of vaccinations should not be an option based on some leading medical experts. On Tuesday, Maine's voters will be asked in a referendum if it's acceptable to allow parents to send their unvaccinated children. Measles vaccination becomes mandatory in Germany.Parents in Germany must vaccinate their children against measles or face substantial fines, according to a new law that takes effect this month.The controversial new regulation was approved last year after the country recorded more than 500 cases of the disease.Germany's Minister of Health, Jens Spahn, said education about the importance of vaccination was not enough.Parents must provide proof of immunisation Religious Vaccine Exemption Bills Spark Debate Across the United States A recent Pew Research Center study found that more than 88% of adults support requiring healthy children to receive vaccines in order to attend school to avoid the potential risk to others.However, ongoing legislative efforts to remove religious exemptions from vaccinations have led to protests by anti-vaccination advocates. A bill known as SB3668 has been put before the state Senate to refrain from vaccinating their children on religious grounds. The legislation would additionally remove most medical exemptions for vaccines that are required to attend school. Virginia bill would add more required vaccines for students.A bill in Virginia could add more required vaccines for students.Right now, the Virginia Department of Health requires nine vaccinations. However, that number could grow to 13.The bill would require Virginia students to receive every vaccine that the CDC recommends for children. Maine's stricter law on vaccination requirements up for a vote.When Maine's voters head to the polls in the presidential primaries Tuesday, they also will cast a vote on an issue many physicians wish had never been politicized -- a referendum to overturn a new law that would allow unvaccinated children to attend school only if they have received a waiver from a medical professional. The new law, which would take effect in September 2021, aims to boost immunization among school-age children in a state where just over 5 percent of kindergartners are unvaccinated not only for medical reasons but because of their parents' religious or philosophical beliefs. That puts Maine below the 95 percent threshold that public health officials say is necessary to stop the spread of preventable and sometimes deadly diseases like the measles.Misinformation campaigns have raised fears about the alleged dangers of immunization, which extensive research has shown are unwarranted. Global vaccine coalition unveils ambitious plan to immunize 300 million children.Gavi, the Vaccine Alliance, has unveiled an ambitious plan to expand the number of doses it helps developing countries purchase, aiming to vaccinate an additional 300 million children from 2021 to 2025. The Geneva-based organization revealed to donors it needs $7.4 billion for its five-year period at an event in Japan on Friday (local time) to launch its replenishment drive. Gavi CEO Dr. Seth Berkley said several other major global health programs -- the Global Polio Eradication Initiative and the Global Fund to Fight HIV, Tuberculosis and Malaria among them -- are also undertaking funding drives. Vatican's Academy for Life encourages parents to vaccinate children Bill Gates reveals his family attends Catholic church Vatican urged to partner with top population controllers on pope's Global Education Pact. American economist and population control proponent Jeffrey Sachs has announced that potential funding partners for Pope Francis's May 2020 Global Education Pact to create a "new humanism" include U.S. billionaire philanthropist Bill Gates Big Pharma spends record millions on lobbying amid pressure to lower drug prices Our Backup Channel on D.Tube: https://d.tube/#!/c/bibletruth777 Our Backup Livestream Periscope account: Periscope.tv/SAVINGHEALTH7 Email your Contact Info for Our Newsletter: [email protected] Our Facebook account: https://www.facebook.com/mrdhouse Donate, Tithe, or Offerings: https://www.paypal.me/savinghealth Cash App: $Mrdhouse Email: [email protected] www.savinghealthministries.com Pastor David House (757) 955-6871 Please make checks out to Saving Health Ministries and mail to: PO BOX 41161 Norfolk, VA 23541 #BillGates #PopeFrancis #Coronavirus #Vaccines

The video features a clip, taken out of context, from Gates' February 2010 TED Talk, "Innovating to zero!" The event was aimed at strategizing a goal of zero carbon emissions globally by 2050.

During the speech, Gates observed:

First, we've got population. The world today has 6.8 billion people. That's headed up to about nine billion. Now, if we do a really great job on new vaccines, health care, reproductive health services, we could lower that by, perhaps, 10 or 15 percent. But there, we see an increase of about 1.3.

The video interpreted that quote to mean that Gates wanted to depopulate the planet. However, that is not what Gates was suggesting. As Snopes reported, Gates' views on the issue of population growth are spelled out in a Forbes magazine article from November 21, 2011:

Gates began consuming data that startled him. In society after society, he saw, when the mortality rate falls--specifically, below 10 deaths per 1,000 people--the birth rate follows, and population growth stabilizes. "It goes against common sense," Gates says. Most parents don't choose to have eight children because they want to have big families, it turns out, but because they know many of their children will die.

"If a mother and father know their child is going to live to adulthood, they start to naturally reduce their population size," says Melinda.

In terms of giving, Gates did a 180-degree turn. Rather than prevent births, he would aim his billions at saving the kids already born. "We moved pretty heavily into vaccines once we understood that," says Gates.

The narrator of the video then tied his anti-vaccine views to the novel coronavirus pandemic and global efforts to develop a cure. He said:

On the contrary, efforts to create a vaccine are aimed at stopping the deadly coronavirus from spreading further and saving lives, not wiping out the human population. The pandemic has claimed more than 10,000 lives around the world, according to CNN.

The video also attacked the Vatican for its support of parents vaccinating their children. The narrator ranted against the Roman Catholic Church, calling it "the beast's agenda." He quoted from the book of Revelation to somehow suggest the church of 1.2 billion people is either doing Satan's bidding or is a false prophet (he doesn't clarify which).

Roman Catholicism is the largest of the three major branches of Christianity. Gates' wife Melinda and their children are Catholic, and he regularly attends a Catholic church with them, he told Rolling Stone magazine.

Even so, Gates is not conspiring with the Vatican to try to depopulate the planet with a vaccine for the novel coronavirus. Gates' support for vaccines is tied to his belief that stabilizing the birth rate will lead to lower population growth. He is not saying he wants to reduce the population of the planet substantially.