Did the UK's Queen Elizabeth II test positive for COVID-19 after meeting with Prime Minister Boris Johnson? No, that's not true: After news broke on March 27, 2020, that Johnson tested positive for coronavirus, Buckingham Palace issued a statement to media outlets saying the royal monarch last met with the UK prime minister on March 11, and that she "remains in good health."

The claim appears to have originated in a UCR World News story (archived here), which ran a story with this headline: "Royal Palace confirms Queen Elizabeth tests positive for cornavirus." It opened this way:

News of the Queen testing positive for COVID-19 does not come as a surprise since there was a possibility that she could have been exposed by the virus during one of her weekly meetings with Prime Minister Boris Johnson who tested positive an hour ago.

Here is an example of what appeared on social media: 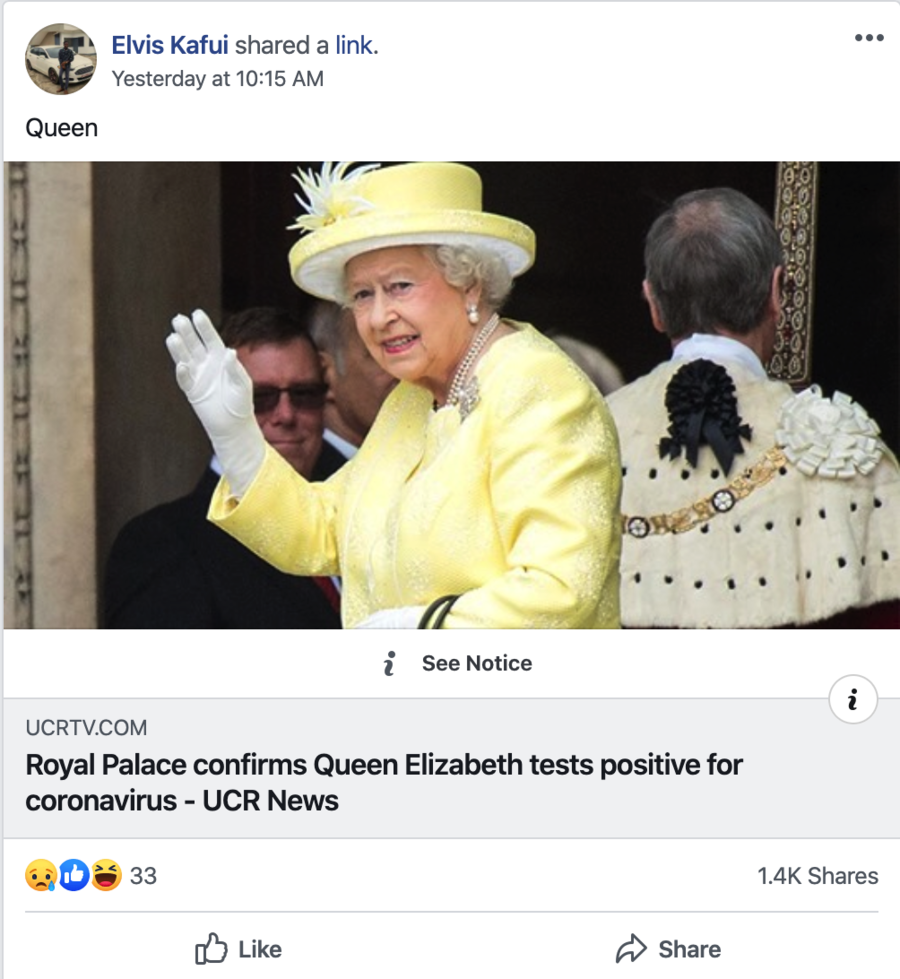 One example of how another blog picked it up and shared the fake news elsewhere is this Facebook post (archived here) on March 27, 2020. The blog post was shared with the headline, "Queen Elizabeth II tests positive for coronavirus." The post opened this way:

According to the news in UCR News; On 11 March, Queen Elizabeth had a face-to-face meeting with Prime Minister Jonhson, whose coronavirus test was positive. 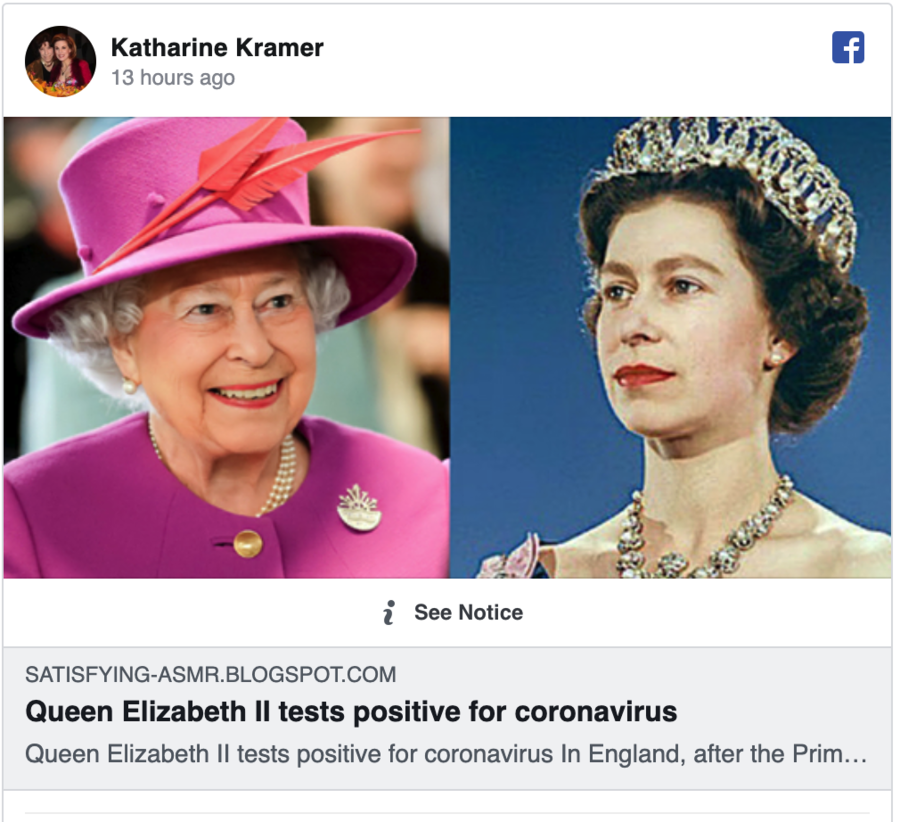 The fake story also appeared on Twitter, being shared, for example, by Ailton Medeiros. His tweet, linking to the UCR story, opened this way (translated from Portuguese):

The coronavirus does not respect even blue blood.

The UCR piece also included this:

Her health, the palace added, remains good and stable though she has shown mild symptoms of the novel coronavirus.

It, then, added a supposed statement from Buckingham Palace:

In a brief statement, the palace said: "HMQ has also tested positive and is currently self-isolating at Windsor Castle. The Queen came into contact with the PM on the 11th March and is following all the appropriate advice with regards to her welfare".

When this story was shared on reddit, it was quickly knocked down and removed.

Commenters had plenty to say in response. "Sorry to sound like a douche, but I can't confirm this at any other source," wrote one person. "Yea, seems like they'd include a link to the supposed shocking release from Buckingham Palace they mention," another replied. "Until BBC.com or royal.uk posts it, not a thing," said a third.

A couple others shared a link to a list of fake news sites, which included ucrtv.com.

Several trusted media outlets -- including CNN, USA Today, and Town & Country -- reported on the queen's health, sharing statements from the palace on March 27, 2020, after news about the prime minister broke. Those statements read nothing like the one UCR shared.

Reuters reported that the queen was "in good health." The news outlet's story opened this way:

"The queen last saw the PM on the 11th March and is following all the appropriate advice with regards to her welfare," a palace spokesman said. 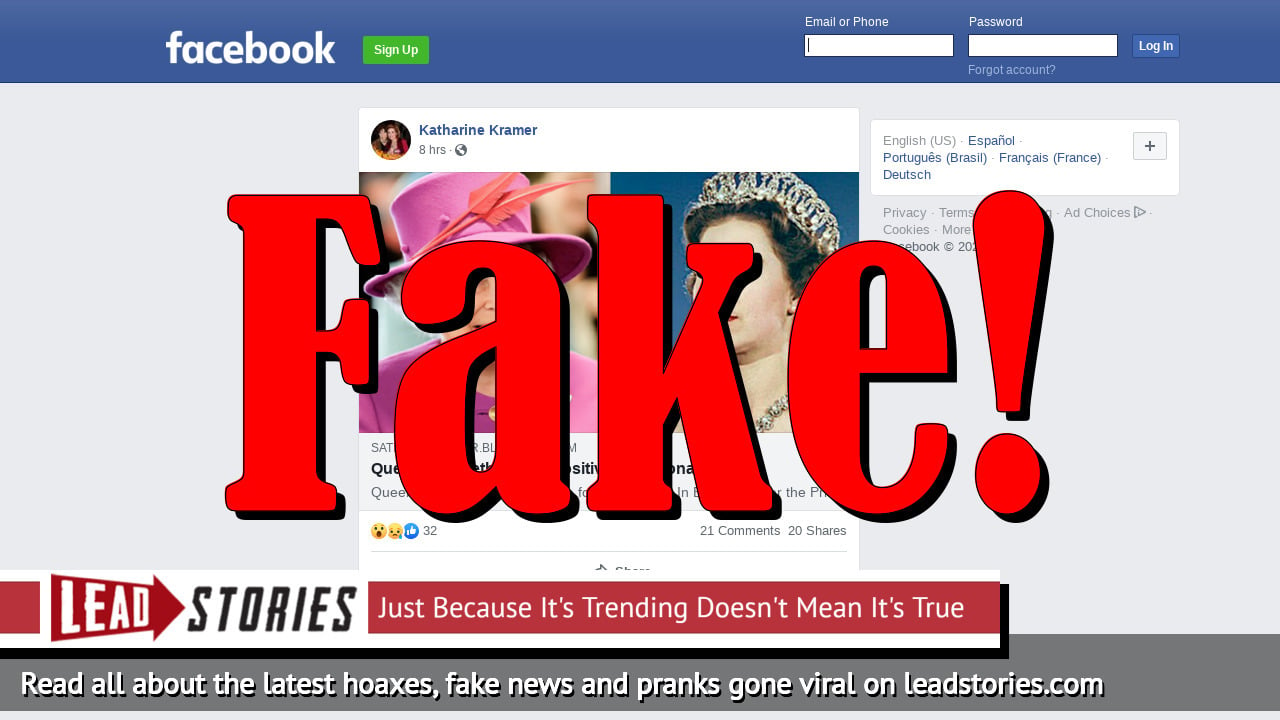