Does Amazon's Alexa speaker say that "the government" released the coronavirus? No, that's not true: The Alexa app/device does not say that the government -- any government -- planned, created and released COVID-19, which has resulted in more than 145,000 deaths worldwide as of April 16, 2020. A video gained traction on social media showing Alexa responding to a question about where the virus is from, along with information about "Event 201."

Amazon told Lead Stories that their AI system does not give that Alexa response to any question about the coronavirus. Also, Lead Stories has debunked any connection between the coronavirus outbreak and "Event 201," which was a pandemic "exercise" hosted by, among others, the Bill & Melinda Gates Foundation -- not any prediction of the current COVID-19 pandemic.

The claim is found in a video (archived here) published by Raven Huggins on TikTok under the title "What the F####." It opened:

TikTok users saw this as of the time of this writing: 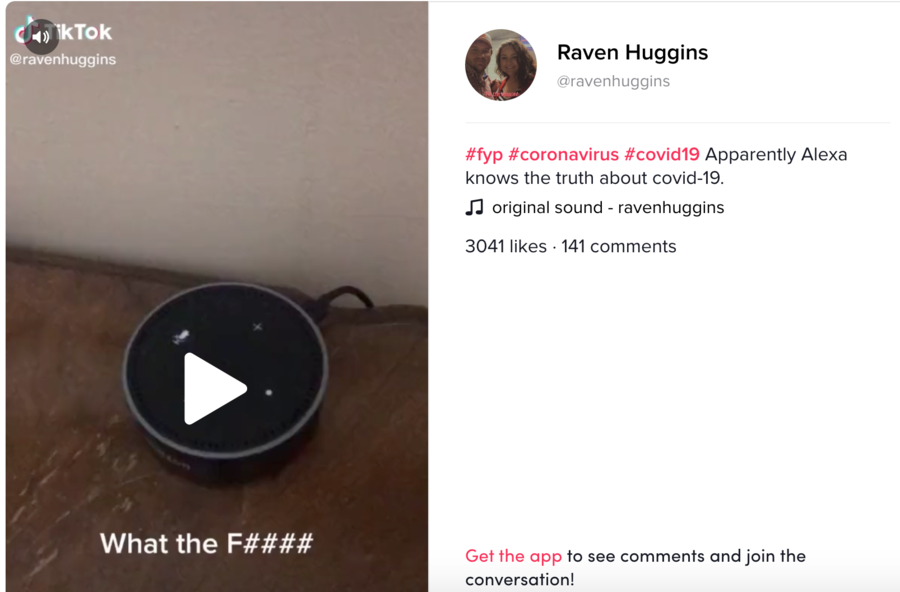 In the video, a person asks an Amazon device: "Alexa, did the government release the coronavirus?"

The response in the video is:

This response from Alexa does not appear to be authentic. Lead Stories, as a test, asked Alexa the same question. We were given this response:

According to the World Health Organization, the exact cause of the current outbreak of COVID-19 is still under investigation. On December 31, 2019, it was reported to the WHO Country Office in China that a new coronavirus strain, later named COVID-19, was identified by Chinese researchers in connection with a pneumonia-like illness based in Wuhan City, China.

There was also a link to the World Health Organization on an iPhone when Alexa was asked the question.

Further, an Amazon spokesperson denied that the response was authentic in a statement to Lead Stories:

This is not Alexa's response to customers, and we have not been able to replicate this example."

The conspiracy connecting Event 201 to the coronavirus outbreak has gained much attention. Lead Sories previously debunked the claim that a "high-level exercise" conducted three months ago showed that a coronavirus pandemic could kill 65 million people.

The organizers of the event, held on October 18, 2019, have issued a statement explaining the "tabletop exercise."

Event 201 was a 3.5-hour pandemic tabletop exercise that simulated a series of dramatic, scenario-based facilitated discussions, confronting difficult, true-to-life dilemmas associated with response to a hypothetical, but scientifically plausible, pandemic. 15 global business, government, and public health leaders were players in the simulation exercise that highlighted unresolved real-world policy and economic issues that could be solved with sufficient political will, financial investment, and attention now and in the future.

The exercise consisted of pre-recorded news broadcasts, live "staff" briefings, and moderated discussions on specific topics. These issues were carefully designed in a compelling narrative that educated the participants and the audience."

Still, many website and social media posts took a leap, claiming multiple conspiracies -- including that the exercise was held to engineer a coronavirus pandemic purposely released in China by "the government".

In October 2019, the Johns Hopkins Center for Health Security hosted a pandemic tabletop exercise called Event 201 with partners, the World Economic Forum and the Bill & Melinda Gates Foundation. Recently, the Center for Health Security has received questions about whether that pandemic exercise predicted the current novel coronavirus outbreak in China. To be clear, the Center for Health Security and partners did not make a prediction during our tabletop exercise. For the scenario, we modeled a fictional coronavirus pandemic, but we explicitly stated that it was not a prediction. Instead, the exercise served to highlight preparedness and response challenges that would likely arise in a very severe pandemic. We are not now predicting that the nCoV-2019 outbreak will kill 65 million people. Although our tabletop exercise included a mock novel coronavirus, the inputs we used for modeling the potential impact of that fictional virus are not similar to nCoV-2019.