Did Donald Trump claim in a 2009 tweet that he would "never let thousands of Americans die from a pandemic while in office" amidst the so-called swine flu, or H1N1, pandemic during the Barack Obama presidency? No, that's not true: A fake tweet containing that claim is being shared thousands of times on Facebook and other social media.

One of the many Facebook posts was published April 16, 2020 (archived here), on the page belonging to James Alexander Bond, with the commentary: "Another classic tRump tweet come back to bite him on his pasty fat ass."

The text of the fake tweet, ostensibly published on November 23, 2009, read:

Obama's handling of this whole pandemic has been terrible! As President, ALL responsibility becomes yours during a crisis like this, whether or not you're entirely to blame. John cCain, and for that matter myself, would never let thousands of Americans die from a pandemic while in office.

But according to the Trump Twitter Archive, Trump tweeted only three times in November of 2009, and none of those tweets -- found here, here and here -- was about pandemics. The first was about his Scotland golf course beginning construction:

--Work has begun, ahead of schedule, to build the greatest golf course in history: Trump International - Scotland.

The second was about a partnership for a new reality television series:

And the third was a Thanksgiving message to his followers:

Wishing you and yours a very Happy and Bountiful Thanksgiving!

A capture by the Internet Archive in January of 2010 also shows only those three tweets in November of 2009: 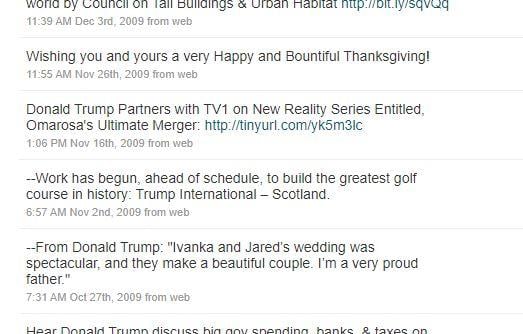 In addition to that, Twitter only started experimenting with tweets over 140 characters in 2017. So, this tweet could never have been pubished prior to that time. In fact, at 290 characters in length, the message wouldn't even fit on today's Twitter -- which allows up to 280 characters per tweet.