Did Italian law enforcement arrest several cardinals and did they seize Vatican City? No, that's not true: the story originated as satire on Patheos.com and was later copied by "real" conspiracy websites. None of it is true.

The original story appeared as an article (archived here) on Patheos.com where it was published on January 17, 2019 under the title "Italy Arrests Cardinals And Seizes Vatican City". It opened:

To Catch A Predator(s)
Italian law enforcement worked for months to launch a sting program on the pedophile clergy that made up Vatican City. The operation was codenamed Spotlight after the 2015 movie about the clergy sex abuse scandal in Boston, Massachusetts.

Inspector Anthony Canard is the commanding officer of Spotlight. "Everyone knew Vatican City was the center of an international pedophile ring," he stated. "We sent busloads of orphans into Vatican City for the annual Cardinal Convention. Long story short? The kids were never in harm's way, and we nabbed a lot of perps."

The word "Catholicism" linked to a page on the site (https://www.patheos.com/blogs/laughingindisbelief/is-this-satire/) that explained what was going on:

Hello, my name is Andrew Hall and I'm the author of Laughing in Disbelief. Before getting to business I just want to thank you for taking some time and reading one of my posts. I appreciate it!

You probably clicked a link to a story and you're here.

The story you were reading is satirical.

The use of humour, irony, exaggeration, or ridicule to expose and criticize people's stupidity or vices, particularly in the context of contemporary politics and other topical issues.

In addition to that the header of the site read "Lauging in disbelief", further indictating the content was just humor.

That didn't deter a site named "Cosmos Chronicle" from taking the report at face value and use it as a source for an article (archived here) titled "Italian Police & Military Units Storm Vatican City and Arrest Pedophile Cardinals". That article opened:

The Italian parliament voted overwhelmingly to merge Vatican City into the city of Rome, effectively ending Catholicism's reign over the city-state.

Everyone knew Vatican City was the center of an international pedophile ring.

The operation was code-named Spotlight after the 2015 movie about clergy sex abuse scandal in Boston, Massachusetts.

As a cover up, the Italian police sent bus-loads of orphans into Vatican City for the annual Cardinal Convention. Italian police had to smuggle the cardinals out on the bus to face criminal charges in Italian courts.

Catholic clergy overseas are quick to point out their peers who are under arrest are victims of a virulent strain of anti-Catholicism and hatred of the man-boy sacrament.

Of course none of that happened. Despite this the story racked up almost 90,000 interactions on Facebook and it is still being shared around in varous conspiracy groups on Facebook according to CrowdTangle data: 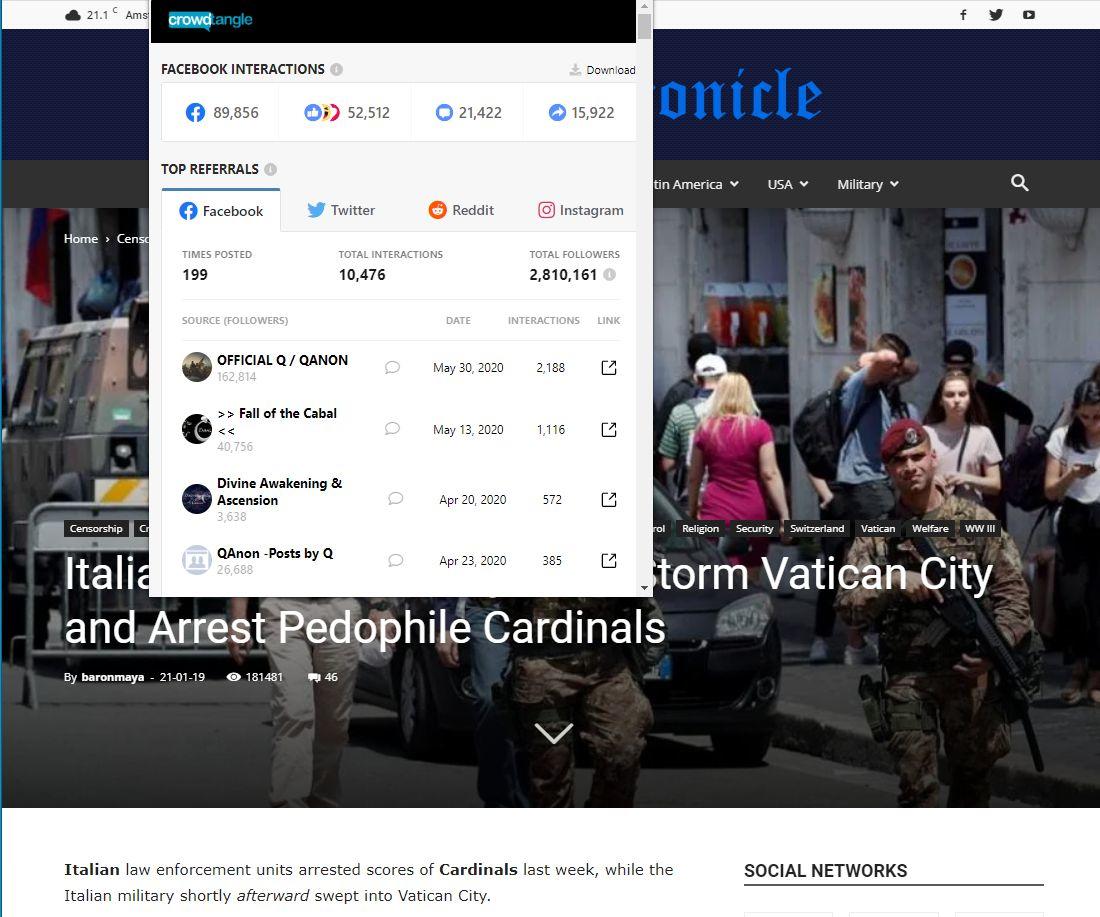 NewsGuard, a company that uses trained journalist to rank the reliability of websites, describes patheos.com as:

A website that publishes hundreds of blogs on religion, politics, and health, including unlabeled satirical articles and blogs that misstate facts to advance the author's views.