Is a man wearing a MAGA-style red hat that reads "Make Whites Great Again" in a photo the Minneapolis police officer who had his knee on George Floyd's neck as Floyd died? No, that's not true: The photo shared widely on social media is of a notorious internet troll who has fooled major news outlets on several instances in recent years. It is not Officer Derek Chauvin, who was fired after Floyd's death. Another photo of a man on stage at a Donald Trump rally and identified in some posts as Chauvin is also not the officer, according to the Minneapolis Police Union president.

The red-hat photo appeared in a post shared on the "Progressive American Politics" page (archived here) on May 26, 2020. The post read:

This is the Minneapolis cop Derek Chauvin that killed # GeorgeFloyd wearing a custom made hat that says, "Make Whites Great Again". And then you wonder why he refused to get his knee off George Floyd's neck even as George screamed out "Mama help me" and wet himself as he suffocated and died on the street. This man is a murderer and should be charged immediately! # Minneapolis # Police # DerekChauvin # Murder # Racist # Cop

The man in the photo wearing the red hat is not Chauvin. Chauvin is the uniformed officer in the other photo with his knee on Floyd's neck.

The man wearing the red hat appears to be Jonathan Riches, a notorious troll who spent time in prison for wire fraud. The Huffington Post covered Riches' trolling of multiple politicians including Hillary Clinton and Donald Trump.

NBC New reporter Brandy Zadrozny reported the man in the MAGA-style hat was Riches, not Chauvin.

Please stop sharing the photo of the guy in the "Make Whites Great Again" hat. It isn't Derek Chauvin. He's a zombie troll.

If something seems too outrageous to believe, it often is. https://t.co/Rf23limat4

The Facebook image of uniformed Chauvin showing him pinning down Floyd is from the viral video of the incident, in which Floyd says he can't breathe multiple times before losing consciousness.

While the photo was taken down on several Twitter accounts, rapper Ice Cube, whose real name is O'Shea Jackson, still had the photo up on May 27.

A wolf in wolves clothing. The demons are among us. #Fightthecowards pic.twitter.com/UYw7zXNabQ

Twitter accounts also showed photos of a man on stage at a President Donald Trump rally in October 2019, misidentifying the man on stage as Chauvin, according to the Minneapolis police union.

Minneapolis news station FOX9 reported that Minneapolis Police Union President Lt. Bob Kroll, who spoke at the Trump rally, said Chauvin is not the officer in the photo. 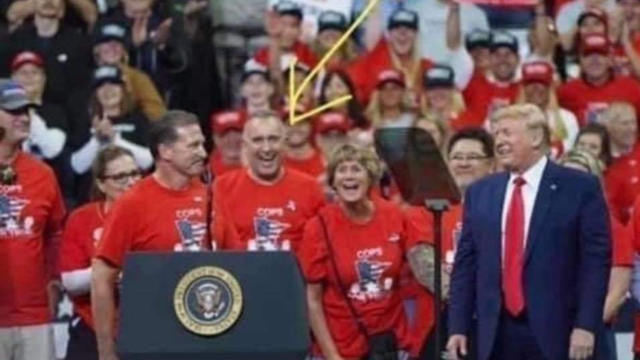 This is video of the Trump rally in Minneapolis in October, 2019.

Chauvin and the three other police officers at the scene with Floyd have been fired.

Here is video from the TODAY Show that shows Chauvin with his knee on Floyd and the news report of the incident.