The death claim appeared in a post, which we will not link to here, shared on Facebook under the title "H0LLYW00D ACT0R, professionaIIy known as Vin Diesel, died in a backyard stunt fail CNN NEWS". It read: 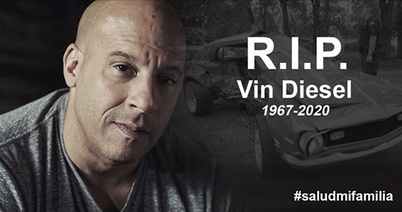 Beware of these type of posts. If you click on them, they will take you to dangerous sites intended to steal you personal information and perhaps lead you to a dark and dangerous place on the internet. In this case, the landing page features a pornographic image depicting an unclothed female.

In addition to that there was a video player on the site that appeared to show a CNN announcement about Diesel's death but it was actually old footage of the announcement of the death of actor Paul Walker.

Viewers on the fake site were tricked into sharing the story to their Facebook timeline, because, after a few seconds of watching the video, an overlay would appear that would ask them to share the link to Facebook to continue watching. And the actual link being shared was one of several different links that all led back to the hoax page, causing several links to go viral at the same time to make the fake news harder to block.