Did President Trump pose with four Ku Klux Klan members in front of a burning cross, as depicted in many social media posts? No, that's not true. It is a faked photo that dates to at least the week before Trump's 2016 election to the White House. Reverse image searches and reporting revealed the photo was created by an artist using a Trump impersonator as part of a book.

Make sure to share this before they take it down

Several debunks have been written about the photo, but perhaps the most detailed explanation of the photo dates to December 2016 in The Guardian.

The earliest version that Lead Stories found, through a reverse image search, was discovered in November 2016 on Twitter:

The picture also appeared on an Indonesian site, Kaskus, on May 16. which also published this undated picture claiming to show Trump with the Klan: 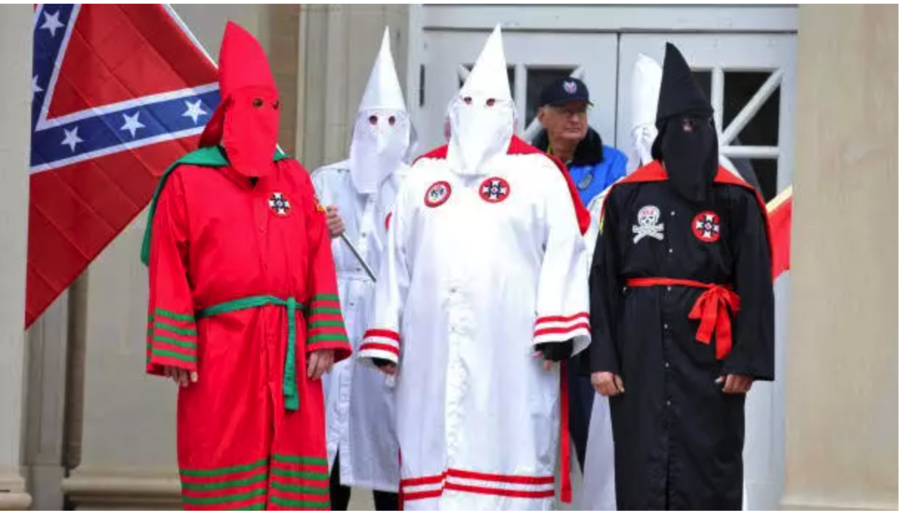 According to the Guardian story:

Artist Alison Jackson has said that she chose to self-publish spoof photographs of Donald Trump as part of a protest against the potentially chilling effect a "litigious" president could have on artistic freedom.

The celebrity lookalike specialist said she was warned by her lawyers against publishing the images, some of which feature a Trump lookalike in compromising situations, and that no book publisher was prepared to release a collection of the Trump images.

Vanity Fair and the Mail Online have published some of the images. However, no publisher has shown some of the most politically sensitive pictures she has produced, including one in which a Trump character is depicted with members of the Ku Klux Klan and another where he is shown holding a rifle.

Is that really...? Could it be...? A celebrity book like no other. Alison Jackson gives us her unique take on modern celebrity culture. She feeds the voyeur in all of us, providing a sneak peek at the lives of celebrities and public figures. In the latest edition of her PRIVATE book series, the BAFTA and multi award-winning Artist unveils a world where the imagined becomes real, populated by some of the most famous faces of day, including The Royal Family, 'Kim and Kanye' and of course, man of the moment, Donald Trump. PRIVATE expertly swings between the outrageous and the all too believable. Using cleverly crafted actors and lookalikes, Alison Jackson ingeniously blurs the lines between fact and fiction -daring to point the lens back at us and our celebrity-crazed culture.

Jackson also published Exposed 2011: The Pictures the Celebs Didn't Want You to See in November 2011. The book, much like PRIVATE, uses art to put celebrities in compromising (comical to some) positions that never actually happened.

Here is Jackson's site, in which she writes:

"Photography acts as a teaser, seducing us into believing we can know something that we can never know. The more we can't obtain it, the more we want it."