Does the Black Lives Matter website for 'Defund The Police' donations go to ActBlue, the 'Biden For President' campaign's top source of donations? No, that's misleading: ActBlue is a non-profit tech platform that facilitates online fundraising for political campaigns and organizations, including Black Lives Matter, but they pass the donations on to those groups.

The claim appeared as an article published by The National Pulse on June 11, 2020 titled "EXCLUSIVE: Black Lives Matter Website, 'Defund The Police' Donations Go to 'Act Blue', The 'Biden For President' Campaign's Top Source of Donations" (archived here) which opened:

The National Pulse can reveal the Black Lives Matter website - the organization spearheading nationwide "defund the police" campaigns - is partnered with ActBlue, a Democrat fundraising platform that is the top donor to Democratic presidential candidate Joe Biden, responsible for raising nearly 99.64 percent of the Biden for President effort.

The National Pulse can reveal the Black Lives Matter website - the organization spearheading nationwide "defund the police" campaigns - is partnered with ActBlue, a Democrat fundraising platform that is the top donor to Democratic presidential candidate Joe Biden, responsible for raising nearly 99.64 percent of the Biden for President effort. While the Biden campaign [...]

The article claims the Biden campaign "may" be profiting from the Black Lives Matter fundraising.

While the Biden campaign insists it doesn't support efforts to defund the police, it may happily profit from Black Lives Matter (BLM) efforts, and is complicit in taking money from an organization partnered with those spearheading the dangerous policy that has already taken root in Minneapolis, New York, and Los Angeles."

The article cites "ActBlue" as the connection between the Biden campaign and Black Lives Matter, warning that the Black Lives Matter organization is promoting "Defund the police," which the former vice-president has said he did not support.

ActBlue does charge a 3.95% processing fee, according to its website:

We want as many groups as possible to be able to create strong grassroots fundraising programs. Our platform is available to Democratic candidates and committees, progressive organizations, and nonprofits that share our values for no cost besides a 3.95% processing fee on donations. And we operate as a conduit, which means donations made through ActBlue to a campaign or organization are considered individual donations. You can read more about our structure here.

To put this simply, ActBlue is the vendor that is a website that takes donations for political candidates and charitable donations. If you go to a website to donate to Black Lives Matter or to the Biden for President campaign, you will be routed to ActBlue for your donation to be processed. The money does not go into one large pot. It is kept separate for each candidate or organization.

If Biden doesn't support defunding the police - an increasingly prevalent call among far-left activists and politicians - then his campaign's financial lifeline shouldn't be at the forefront of funding the movement.

ActBlue is not raising the money for the Biden campaign, they are the conduit for payments to be made.

The article misleadingly claims that ActBlue is directly giving money to the Biden for President campaign:

This amount is true but that has come from 3,565,414 donors, listed as "number of payments," not from ActBlue as a donor. 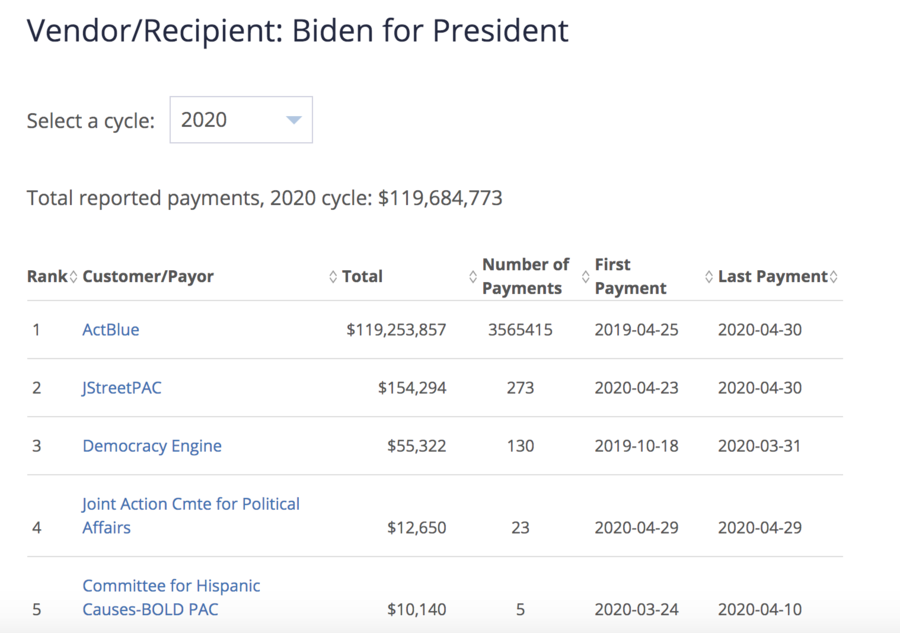 The National Pulse also use a graphic to show ActBlue's top vendors/recipients with 10 democratic campaigns. However, ActBlue is the payment processor for these campaigns, not an actual donor. The money is coming from individual who are making the contributions through the website to the individual campaigns. 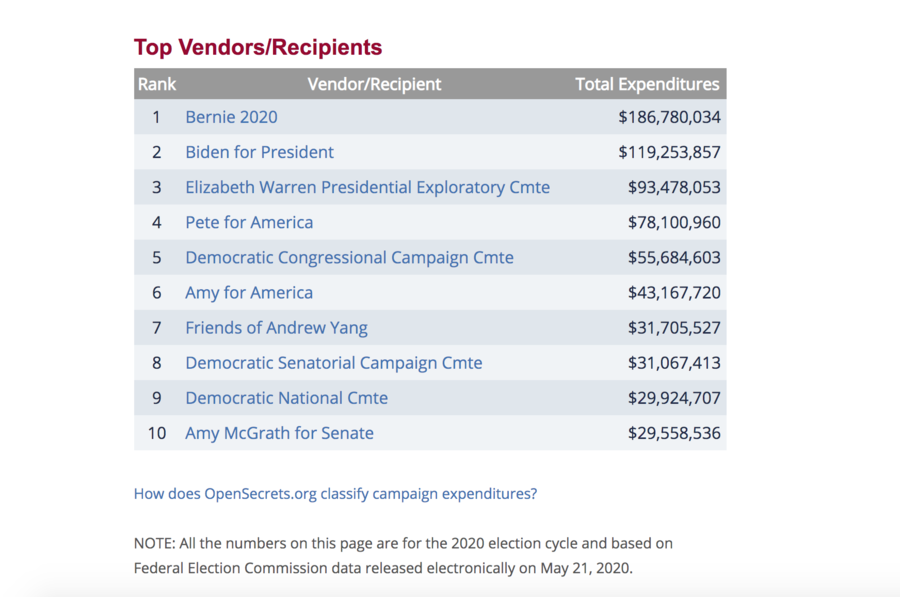 The false claim has been repeated in various forms, including this TikTok video: