Were people tested for COVID-19 exposed to the coronavirus due to contaminated tests? No, that's not true: Federal officials did send out defective tests in February -- one month into the pandemic in the United States and about six months before posts making the "tainted lab kits" claim went viral on social media. But the defective tests were recalled, did not contain an active virus that would spread, and only parts of the test used in labs were contaminated -- not parts that made contact with patients.

Covid-19 test HAS the virus...the US Centers for Disease Control and Prevention sent states tainted lab test kits in early February that were themselves seeded with the virus, federal officials have confirmed." 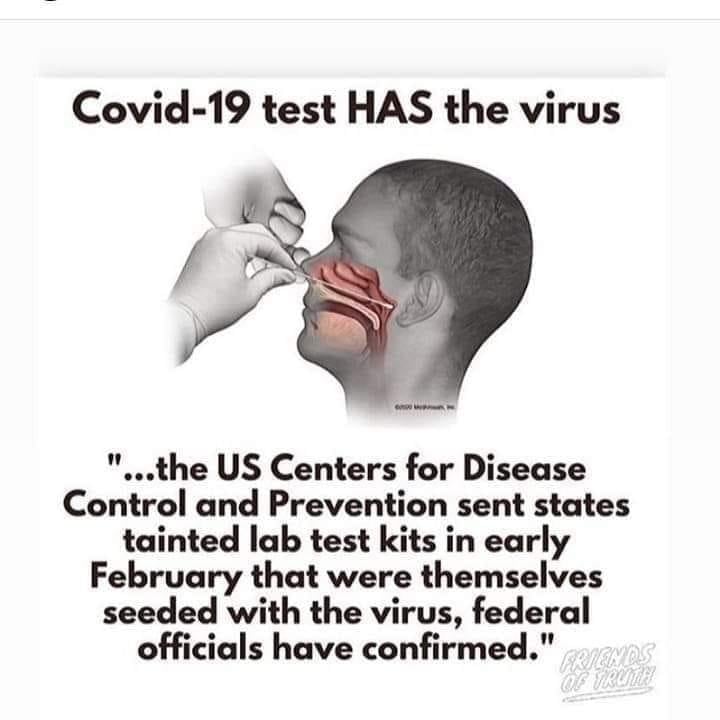 This is false. This is not happening now, as the first line of meme suggests. The test kits were never purposely "seeded" with the live virus. Rather, a federal review of what happened showed that the virus likely contaminated tests accidentally, but the virus was not found to be live or active in the tests. Also, sterile swabs are used to take samples from people being tested, and these were not themselves contaminated, as suggested by the meme.

So, the implication that it would spread the virus to people getting tested is just wrong. The only thing right about the post is that the contaminated test kits were sent to labs in early February. But these tests were later recalled. No one got the virus from the testing kits.

The Washington Post on April 18 ran a story that opened:

The failure by the Centers for Disease Control and Prevention to quickly produce a test kit for detecting the novel coronavirus was triggered by a glaring scientific breakdown at the CDC's central laboratory complex in Atlanta, according to scientists with knowledge of the matter and a determination by federal regulators.

The CDC facilities that assembled the kits violated sound manufacturing practices, resulting in contamination of one of the three test components used in the highly sensitive detection process, the scientists said.

The cross contamination most likely occurred because chemical mixtures were assembled into the kits within a lab space that was also handling synthetic coronavirus material. The scientists also said the proximity deviated from accepted procedures and jeopardized testing for the virus.

The Washington Post separately confirmed that Food and Drug Administration officials concluded that the CDC violated its own laboratory standards in making the kits. The substandard practices exposed the kits to contamination.

A story by The New York Times the same day included this paragraph:

Problems ranged from researchers entering and exiting the coronavirus laboratories without changing their coats, to test ingredients being assembled in the same room where researchers were working on positive coronavirus samples, officials said. Those practices made the tests sent to public health labs unusable because they were contaminated with the coronavirus, and produced some inconclusive results.

So yes, the kits were defective, and yes, the CDC messed up with a contaminated reagent, which, according to the New Oxford American Dictionary, is "a substance or mixture for use in chemical analysis or other reactions." But no kits with the active novel coronavirus are currently being shipped to states across the country.

Here is the executive summary of the findings from the Health and Human Services review, which began March 1 and was released June 19: 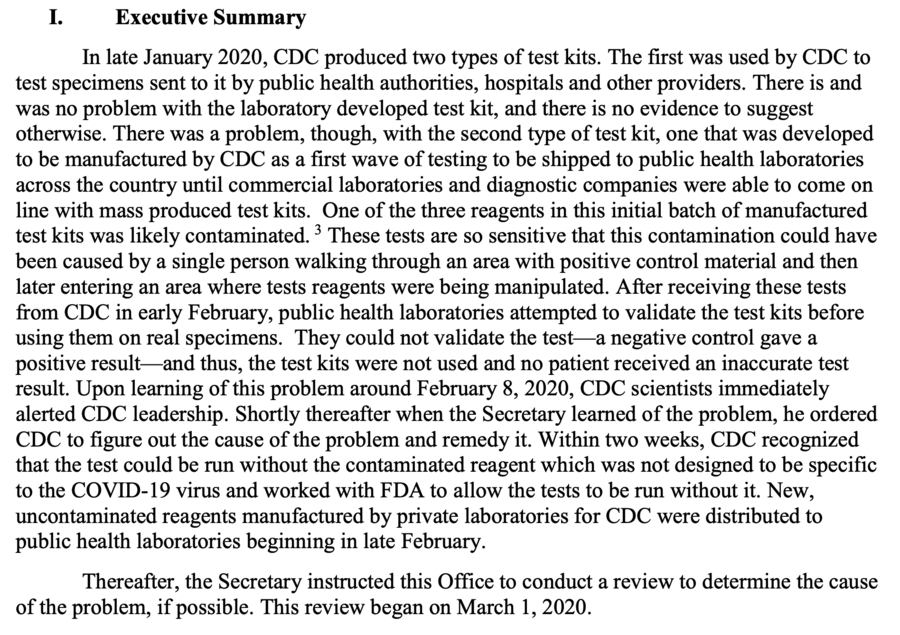 On March 19, about two weeks after the FDA's review began, The Wall Street Journal reported that the testing was botched from the beginning -- getting a late start on what government officials suspected would be a massive outbreak, and also by running into manufacturing problems. The first tests, according to the Journal's story, were "restricted testing to people with virus symptoms who had recently traveled to China, where the virus first emerged, or had been exposed to a known case."

Again, while early mistakes were made in producing and manufacturing testing kits, no federal agency or official has -- as the meme on social media claims -- "confirmed" that COVID-19 tests are currently infected with the novel coronavirus.