Did Mel Gibson say that Hollywood is controlled by "parasites" who are involved in child sacrifice and pedophilia? No, there is nothing to substantiate the old claim that Gibson said it while on a promotional tour in 2017. The actor's spokesman told Lead Stories, "I can assure you that he never said such a thing ... he never stated that nor anything close to resembling those comments, period."

The claim appeared starting in late 2017, with one example being an article (archived here ) published by SmileCelebs.com on December 1, 2017, under the title, "Mel Gibson: Hollywood Elites 'Kill Innocent Children and Drink Their Blood.'" It opened:

In a shocking exposé, movie star Mel Gibson has blown the whistle on the epidemic of 'parasites' who 'control Hollywood' that are involved in child sacrifice and pedophilia. The Lethal Weapon star said that 'every studio in Hollywood is bought and paid for with the blood of innocent children.'

He said, according to the made-up article, that key players in the movie business "get their kicks from destroying the sanctuary of children" as they "thrive on breaking every God-given taboo known to man.

How the false article came to be published by SmileCelebs.com is a revealing example of the creation and distribution of click-bait stories on social platforms. It was apparently first published by YourNewsWire.com, a website that was taken offline and replaced by publisher Sean Adl with NewsPunch.com. Adl changed his business model away from the more outlandish claims and deleted many of his stories that would not hold up to fact checking. This included the story titled Mel Gibson: Hollywood Is 'Den Of Parasites' Who 'Feast On Blood Of Kids' published on November 30, 2017. It has been deleted, but an archived version remains available.

A day later, NeonNettle.com copied the YourNewsWire.com story and published it as its own on December 1, 2017. The website revised the headline slightly to Mel Gibson: Hollywood Elites 'Kill Innocent Children & Drink Their Blood', which has also since been deleted but remains available in an archive.

Hours later, SmileCelebs.com copied the NeonNettle.com version and republished it. The bottom line is all versions were false.

Since the original posts in 2017, the claim -- with no substantiation in any of the posts -- has been repeated but only on social media blogs like Pedogate, and non-verified sites Pinterest and Twitter. Their wording year-to-year and post-to-post remains identical, indicating that people copy-and-paste. Wherever the post appears, the headline is often the same: 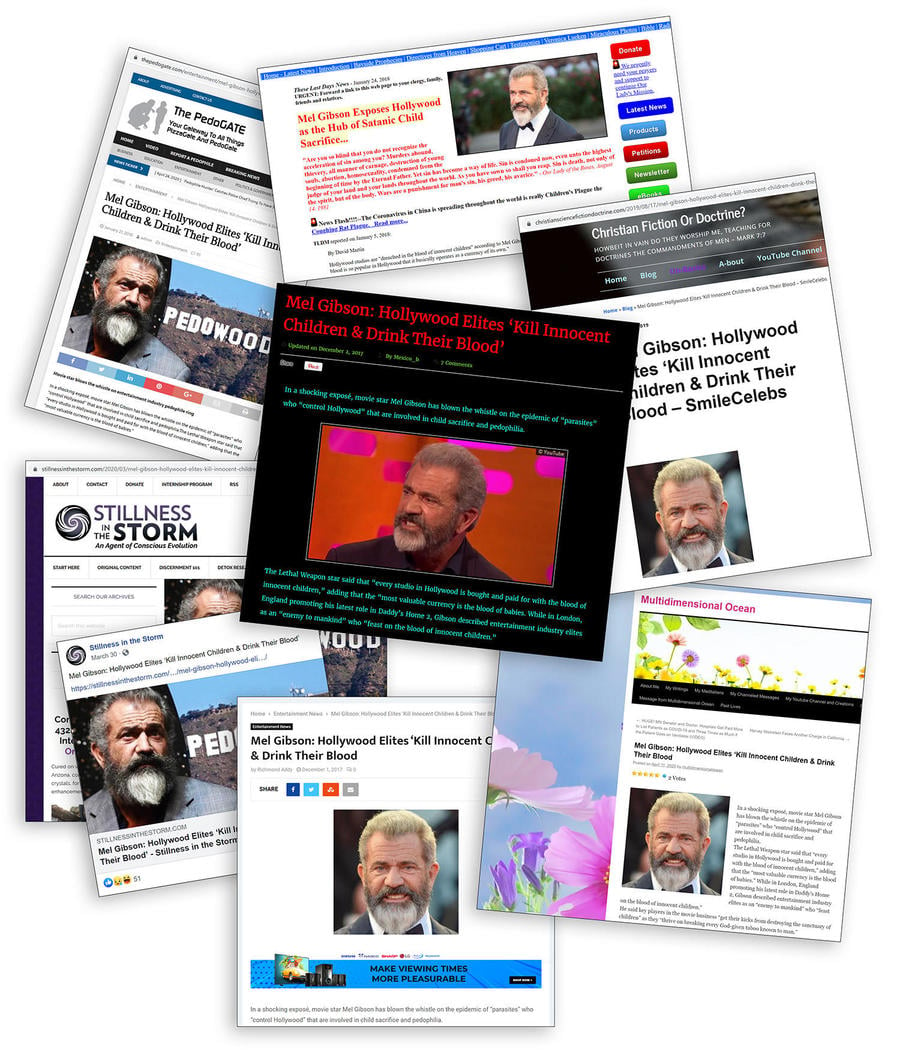 Even though there's no proof Gibson made these accusations, according to tracking website Buzzsumo, the assertion of Hollywood child-killers has garnered 94,700 reactions and 22,200 shares. The largest number of views were amassed by pedogate.com since 2018, with 13,700 shares.

The meme alleged that Gibson, while in London to appear on the popular British talk program the Graham Norton Show, exposed a ring of blood-thirsty pedophiles. He did not. In actuality, the actor was promoting a new movie, "Daddy's Home 2," sitting next to co-star Mark Wahlberg, and saying it had been a tough road getting back to work in Hollywood after his 2006 DUI arrest during which he made anti-Semitic remarks. The meme falsely claimed:

The veteran actor answered questions from shocked guests in the green room backstage after his appearance, regarding the true nature of Hollywood 'elites.' He explained 'I'm sorry that I am the one to break this to you, but Hollywood is an institutionalized pedophile ring. They use and abuse kids for their own sick spiritual beliefs, if you can even call them that. I don't fully understand it myself, but they harvest these kids for their energy and feast on their blood. They don't do it mercifully either, they scare the sh*t out of them before they sacrifice them.'"

Did Gibson say any of this on camera to an audience? No. The alleged remarks were purportedly -- and conveniently -- made in the "green room," which is off-stage and away from cameras and microphones. No reporters recorded Gibson speaking the words, or published an expose following the Norton show, not even the famously hungry British tabloids. None of the "shocked guests" came forward to substantiate the story.

Alan Nierob, Gibson's publicist, who was in Norton's studio at the time, told Lead Stories:

I can assure you that he never said such a thing. In fact I, as well as representatives from Paramount studios, were with Mr. Gibson at that taping as well as with him for his entire promo tour, and he never stated that nor anything close to resembling those comments, period."

The video of Gibson's appearance on the Norton show is here.

One provable thing Gibson said about Hollywood, documented by sound and picture combined, is his remark to Norton about being glad to get accepted back into Hollywood:

Sure, after digging ditches for the past 10 years, it's been fun."