Did Antifa protesters in Portland, Oregon, burn a cross on August 1, 2020? No, that's not true: A still frame taken from a video of a flag burning was photoshopped to look like a burning cross.

Portland, OR. Look at ANTIFA burning crosses like how the Klan used to do to blacks

This burning cross image was produced with a minimal amount of effort and a photo editing program. The burning effect is a brush mode called "color dodge" in combination with a yellow color. There was no attempt to render flames, the overlapping strokes of a round brush tool are clearly visible in the shape of the cross. 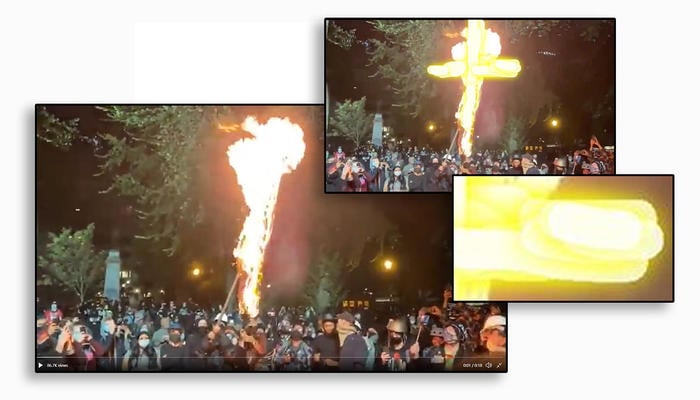 The flag-burning video which this still frame was pulled from was posted by the Twitter account Kalen From Scriberr (here)(archived here) on August 1, 2020.

The hasty photo manipulation that added the cross shape to the flames has been used in several different memes falsely claiming a cross-burning in Portland (or Seattle). Below are three examples. The text of the memes read:

1. The Klan is in Seattle!! Wait, that's just Antifa and BLM burning a cross. Now where's the irony in that?

3. Giving Honor to their founders in the KKK, the Democrat-organized Antifa group burn a cross in Portland, a subliminal gesture of solidarity to their political forebears.