Did Jacob Blake, the man shot seven times by Kenosha, Wisconsin, police, have a charge or conviction against him that he "raped a 14-year-old girl" when he was shot? No, that's not true. Blake was named in a third-degree sexual assault warrant filed July 6, 2020, and that warrant was open when he was shot. But the alleged victim of the assault is a woman who said she had known Blake for several years, according to police and news reports, and not a teenage girl.

The claim that Blake "raped a 14 year old" appears in a post (archived here) published on Facebook on Aug. 20, 2020. The post, referring to New Orleans Saints' quarterback Drew Brees wearing a "Jacob Blake" sticker on his helmet, read:

With that one sticker on your helmet you ruined your stellar career. Glorifying a man that raped a 14 year old and was shot while resisting arrest. Nice job family man!

The charges against Blake include criminal trespass to a dwelling, domestic abuse and disorderly conduct -- all misdemeanors -- and third-degree sexual assault ,a felony. The public case record found on the Wisconsin Circuit Court site does not include child sex abuse charges.

Here is a screenshot of the charges on the site: 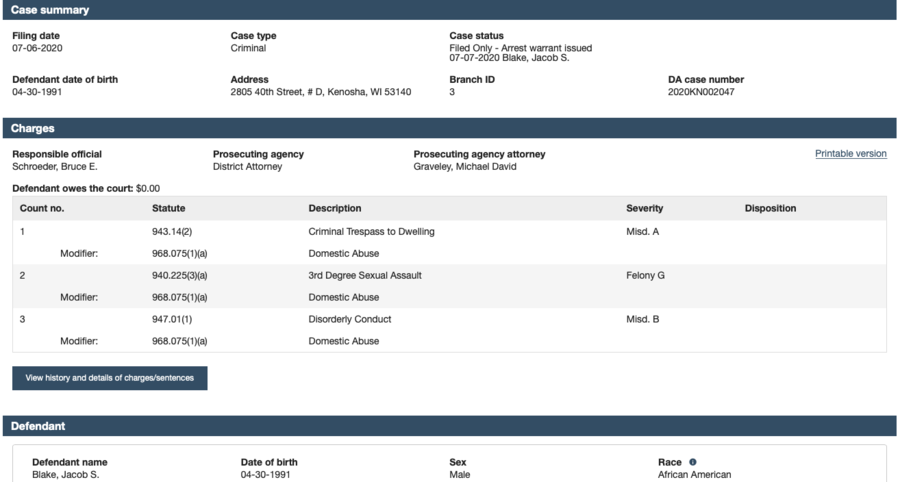 Blake does not appear in the state's sex offender registry, which provides public information on the whereabouts of convicted sex offenders.

There is no mention of a sexual assault on a minor child nor a warrant for such in the Wisconsin Department of Justice news release about the shooting. The Aug. 28, 2020 release, on the Department's website, reads, in part:

KENOSHA, Wis. - The Wisconsin Department of Justice (DOJ) Division of Criminal Investigation (DCI) is continuing to investigate an officer involved shooting (OIS) in Kenosha, Wis. that occurred on the evening of Sunday, August 23, 2020.

Kenosha Police Department officers were dispatched to a residence in the 2800 block of 40th Street after a female caller reported that her boyfriend was present and was not supposed to be on the premises.

Mr. Blake walked around his vehicle, opened the driver's side door, and leaned forward. While holding onto Mr. Blake's shirt, Officer Rusten Sheskey fired his service weapon 7 times. Officer Sheskey fired the weapon into Mr. Blake's back. No other officer fired their weapon. Kenosha Police Department does not have body cameras, therefore the officers were not wearing body cameras.

During the investigation following the initial incident, Mr. Blake admitted that he had a knife in his possession. DCI agents recovered a knife from the driver's side floorboard of Mr. Blake's vehicle. A search of the vehicle located no additional weapons.

Lead Stories has called seeking comment from the Kenosha police spokesman, the Kenosha County District Attorney's Office and the Wisconsin Department of Justice Division of Criminal Investigation. This Lead Stories report will be updated, if appropriate, when they respond.

Blake, who is paralyzed from the waist down and needing multiple surgeries, was shot Aug. 23, 2020. There have been protests in Kenosha ever since video of the shooting went viral. Some of the protests have been violent, including the fatal shooting, allegedly by 17-year-old Kyle Rittenhouse of Antioch, Illinois, of two protestors and the wounding of a third.