Did Crip gang members volunteer to fight wildfires because they turn the sky red? No, that's not true: The claim was apparently intended as a joke at a time when serious wildfires were devastating millions of acres, forcing massive evacuations and killing people in western states. It used elements from a real CNN story about Russia to make a meme that appeared to be a CNN article.

The claim appeared in a meme in a post (archived here) shared on Instagram on September 11, 2020 under the title "Heartwarming: Members of Crip gang volunteer to fight wildfires because the sky is red". It opened:

These crip gang members suit up to help fight wildfires. Due to their ogoing feud with the bloods, they despise all things red; ater the sky in their area turned red, they put the guns and picked up the hoses. 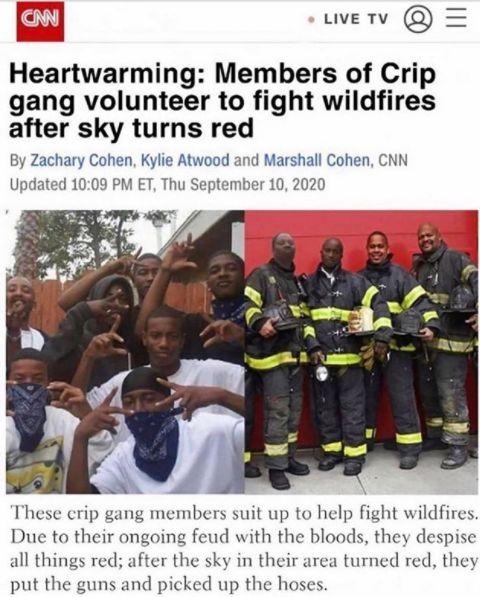 The meme, apparently was taken from the iFunny meme site, was created used the byline section from a real CNN story:

The joke was apparently playing on the longstanding gang feud between the Crips -- whose color is red -- and the Bloods -- who wear blue.