Did a worker in Philadelphia disguise trash cans so that people would throw away their ballots? No, that's not true: The posters proclaiming "Ballot Box" on sidewalk solar-powered trash compactors were created to advertise "Ballot Box" an exhibit about the history of voting rights at the nearby Union League Building. Suspicions were aired. Complaints were made. Apologies were made. Trash was carefully sorted to ensure no ballots had been accidentally tossed.

The story appeared as a post (archived here) on Instagram, where it was published on October 27, 2020. The caption read "Stay vigilant, people. They will try anything. Make sure you drop off your ballot to a legit ballot box. Make sure you check the next post." The post had four photos of the scene and this caption:

This is a trash receptacle I have used many times on the corner of s 15th & Sansom..... This guy just plastered these ballot box signs on it. And he had more to plaster on other trash cans around downtown... 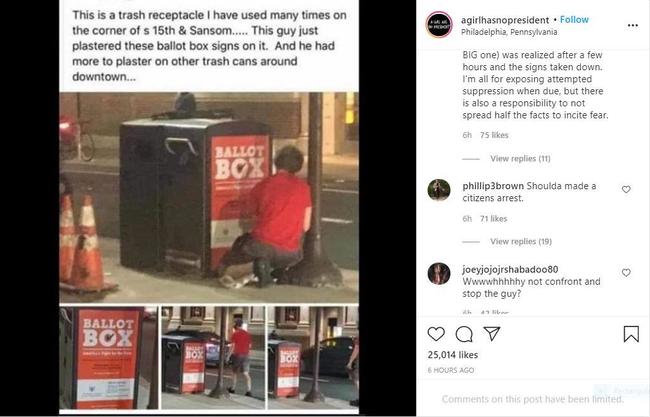 The Philadelphia Inquirer reported about the misunderstanding October 23, 2020, in an article titled, "The Union League foundation just wanted to advertise an exhibit on voting. Then it was accused of suppression."

The bright-red signs took up the entire side of the two trash cans and read in large lettering: "BALLOT BOX."

It was an advertisement unveiled Friday for the Union League Legacy Foundation's exhibit on the history of voting rights -- and a quickly realized mistake.

The signs were up for only a couple hours, said Kira Foley-Tuzman, the foundation's chief administrative officer, before the group realized that the signage could mislead voters into thinking a trash can was an official ballot box.

It was an unfortunate messaging blunder, with terrible timing.

Although the Enquirer explained the situation on October 23, quoting the Union League official as saying the signs were up for "only a couple of hours," posts with photos continued to be shared on social media.

The Streets Department deployed sanitation workers to sort through the trash of those bins -- at Broad and Sansom Streets and 15th and Sansom Streets -- looking for any ballots a voter may have slipped in. A city spokesperson confirmed there were none.

To get a better perspective on how a mistake like this could be made, it helps to know the solar-powered compacting trash cans (called Bigbelly trash cans) are typically covered with ads. There was even an initiative in 2018 to substitute street art for promotional advertising. Billypenn.com wrote about it in August of 2018, "Street art replaces Bigbelly advertising in Center City 'Trashcan Takeover'"

As development ramps up in Philly, that balance is changing -- but a new street art project called "Trashcan Takeover" aims to prove the shift toward commerce doesn't have to be garish.

Garish is the word that came to mind when, in June, new ads took over the city's newest advertising space, the sides of Bigbelly trash cans. Barbera's Autoland bought 200 of the garbage facades and plastered them with loud red and yellow lettering touting "300 JEEPS CHEAP!"

This Google street view of the Union League Building from Broad & Sansom St. and 15th and Sansom St. show the Bigbelly trash cans with advertising for Gary Barbera's "Coats for Kids" winter coat drive. Clearly the intention in that case was not to put the coats in the garbage cans. These Bigbelly cans are one of very few advertising surfaces in this Center City neighborhood.

In Philadelphia and several eastern U.S. cities, Green City Solutions is the company brokering the sale of the ad space by municipalities that own the solar powered Bigbelly recycling trash cans. The website shows an an assortment of ads custom-printed to fit on Bigbelly trash cans. Lead Stories has not confirmed if this company installed the "Ballot Box" promotion.

The Union League Legacy Foundation issued this apology on their Facebook page (here) on October 23, 2020: 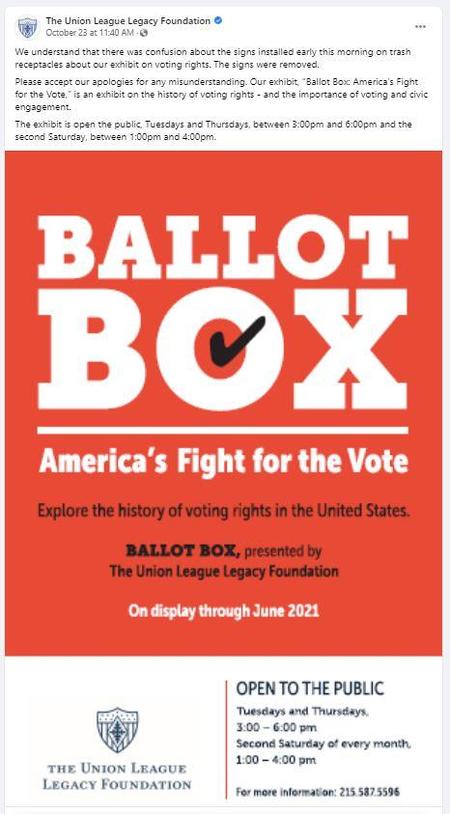