The myth surfaced again in a post published on October 11, 2020, by a Facebook page named "Lost In History " (archived here) with following text:

Australia, until 1960s, Aboriginal Australians came under the Flora And Fauna Act, classified them as animals, not human beings.

The myth of the Flora and Fauna Act is said to have originated sometime shortly after the 1967 referendum and to have spread even more after 2000. This incorrect information has been adopted as and repeated as common knowledge, without any sourcing or verification. The idea behind the claim has been repeated by notable people over the years, and continues to spread in memes on social media.

An intensive fact-check on this topic was published by ABC.net.au (Australia's public broadcasting system) titled, "Fact check: Were Indigenous Australians classified under a flora and fauna act until the 1967 referendum?" It quotes Professor Marcia Langton, a University of Melbourne indigenous studies expert, explaining that the source of the Flora and Fauna Act myth is the aboriginal Filmmaker Lester Bostock:

"Lester Bostock (now deceased) gave a regular speech about how we were classified under the 'flora and fauna act'," Professor Langton wrote in an email.

"I thought at the time, and so did many others, that he meant this in a metaphorical way. I had no idea that this would grow into the urban myth that it is today."

However, she added: "We were not classified under the 'flora and fauna act' but we were treated as animals."

Extensive research has been conducted by scholars and historians in Australia and none have been able to find any evidence of the existence of such an act.

In 1967 there were two changes to the Australian constitution in a referendum which over 90% of Australian voters approved. The 1967 referendum removed a phrase in section 51 of the Constitution which had excluded aboriginal people from protections under federal law and removed section 127, which forbade the counting of aboriginal people in the Australian census. The State of Victoria Library details the changes in an article linked to here.

In the years after the referendum passed, the number of aboriginal people who were counted in the census increased tremendously. It is true there was a time when the indigenous people of Australia were not counted in the census, but they had not previously been counted or classified as animals under a "Flora and Fauna Act."

The shocking photo of a group of aboriginal men, chained together by the neck, seated on the ground with a white man standing guard over them has appeared with the Flora and Fauna Act myth since at least December 15, 2014, when it was posted on Twitter by the History in Pictures Account.

Australia, until 1960s, Aborigines came under the Flora And Fauna Act, classified them as animals, not human beings pic.twitter.com/rHB9TlHM8A

Several of these images depicting brutal treatment of aboriginal people in chains are discussed in the Guardian article titled, "The legacy reverberates: how a repulsive image reminds us of our ugly past" The version of this photo appearing in the social media posts is cropped, similar to how it appears in the 1983 book 'Sons in the Saddle' by Mary Durack, which is captioned, "Aborigine prisoners, mostly arrested on cattle-spearing charges. Wyndham 1901." The uncropped version of the photo reveals there were even more people in the group chained together, including at least two who appear to be teenage boys. The uncropped version appeared in the 1995 book, 'Nyibayarri: Kimberly tracker' by Jack Bohemia and William McGregor. It is captioned, "Aboriginal men in chains at Wyndham prison in Australia c 1901. " 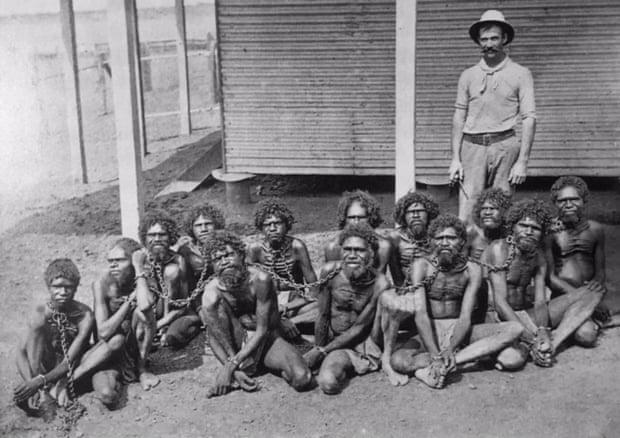 Samuel Byrnand wrote his honors thesis on this topic, "Reconfiguring History: The "Flora and Fauna Act" and other myths of Australian legislation." He summarized the importance of tackling this myth when interviewed by ABC this way:

There are enough horror stories in Aboriginal Australia; real, actual stories that need to be addressed. We don't need to be making it up.