Did Democratic U.S. Rep. Alexandria Ocasio-Cortez endorse a shoe store on Twitter, urging it to "expand the size run so everyone can have a pair"? No, Austin, Texas-based Nice Kicks posted a fake tweet using images from the congresswoman's Twitter account and over-laid words. The composite appeared on Nice Kicks' Instagram and Twitter accounts. As a member of Congress, Ocasio-Cortez -- whose staff said the tweet was "false" -- cannot make private endorsements of any kind.

This is a policy we can get behind! 😉 pic.twitter.com/YYvPo3gDx6

.@RepAOC is proud to stand with @RepEspaillat and @RepHankJohnson in calling for the immediate closure of Irwin County Detention Center, following reports of "overly aggressive, invasive, and unnecessary surgeries" on detained women. https://t.co/L9KlV1Lc3u

Her staff also sent out one news release on the same day, with AOC and others calling for an end to "appalling conditions and practices" at a facility in Georgia run by the U.S. Immigration and Customs Enforcement (ICE) agency. 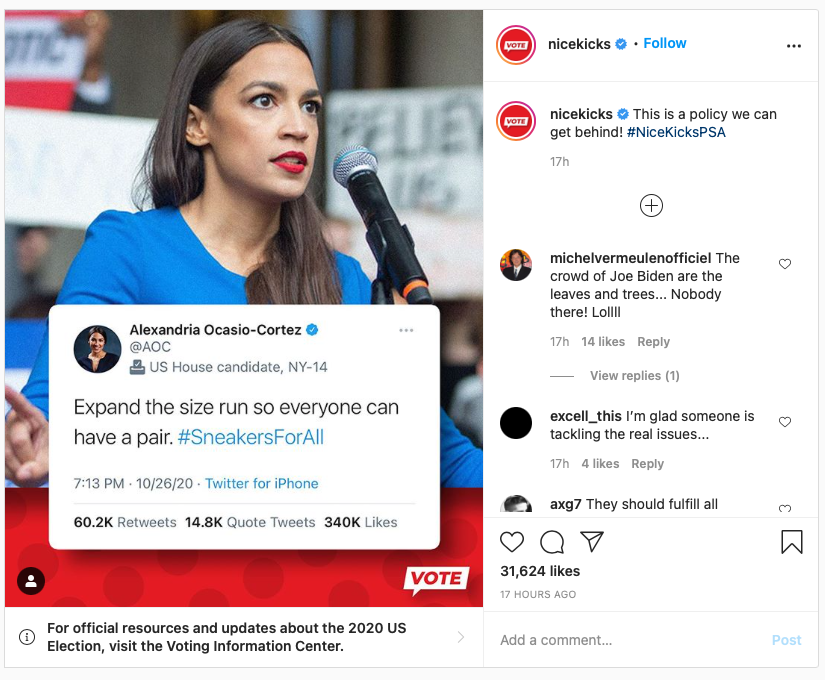 Lead Stories reached out to Nice Kicks for comment. Lead Stories will update this report, as appropriate, when they respond.

On the House Ethics Committee "Laws, Rules, and Standards of Conduct" page, it states this: