Is the Santos Dumont Airport runway only 1,300 feet long? No, that's not true: The runway was 1,300 feet long back in 1934 when the airport was first being developed. The runway size was increased with improvements over time and currently the main runway is 4,340 feet long.

The claim appeared in a video (archived here) posted on Facebook on October 11, 2020. It was captioned:

The plane landed at the most t.errifying airport -Santos Dumont Airport.

The video shows the dramatic landscape of Rio De Janeiro and two different airplanes approaching and landing at Santos Dumont Airport. Several of the claims in these video captions:

The landing strip at the Santos Dumont Airport has not always been the same size. Originally the airport was a terminal that served seaplanes landing in the Guanabara Bay. In 1934 there was a project fill part of the way to construct a runway. The landfill project continued over several years and the original 400-meter runway (1,300 feet) was expanded to 700 meters (2,300 feet) in 1936. That year the airport was named Santos Dumont, after Alberto Santos-Dumont, Brazialian pioneer in flight.

Currently there are two runways, the main runway is 1,320 meters long (that's 4,340 feet!), not 1,300 feet long as claimed in the video. Below is a screenshot of a Google map satellite view of Rio De Janeiro showing the measurement of the runway. It is clear this manmade landfill is not an island, although it is true that overshooting the runway would result in a nay landing. This airport's runway is large enough to handle Boeing 737 and Airbus A230 planes. 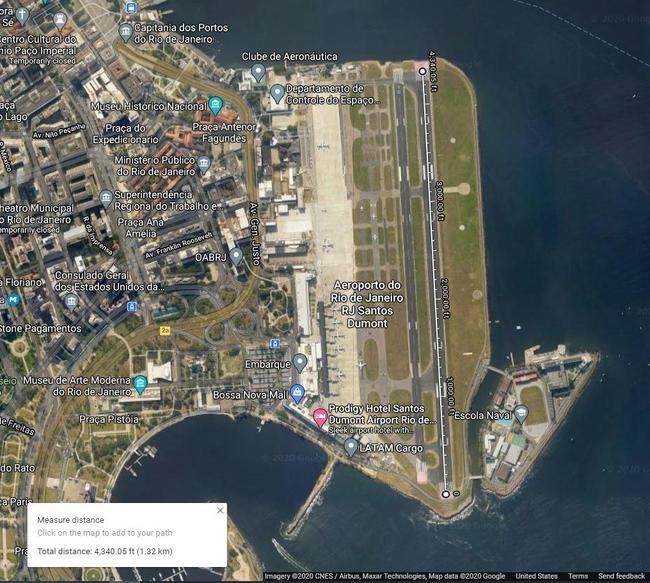 On July 17, 2007 there was a terrible plane crash in Brazil, but it did not involve the Santos Dumont Airport. The crash happened at the Sao Paulo Congonhas Airport and there were no survivors among the plane's passengers or crew. Additionally, there were 12 people on the ground who were killed. The report on the crash of TAM Flight 3054 is recorded by the Aviation Safety Network from the Flight Safety Foundation. There were a total of 199 lives lost.