Did Kamala Harris violate Ohio electioneering laws when she addressed voters standing on line to vote early on October 24, 2020, in Cleveland? No, that's not true: Harris was standing in a permissible area when she addressed the Ohio voters. Campaigning or loitering within 100 feet of the entrance of a polling place is forbidden by Ohio law. If the line of waiting voters extends beyond that hundred-foot boundary, no one except election officials, observers or police officers may stand within 10 feet of the voters in the line. Harris was further than 100 feet from the entrance and more than 10 feet from the voters waiting in line.

This is completely against the rules, but apparently the rules don't apply to Democrats.

The post shares a link to the October 27, 2020, article on hermancain.com titled, "Video Shows Kamala Harris Campaigning to People Standing in Line To Vote" (archived here) The article contains several quoted comments from people who believe that this is illegal. The article also includes a yes/no poll, "Is Kamala Harris Breaking the law by doing this?" which requires the reader's email and will subscribe them to Western Journal Updates.

The article includes the quote of what Kamala Harris said to the voters on line and acknowledged that, "the speech was relatively short on partisan rhetoric":

Thank you for voting and voting early. Your vote is your voice, your voice is your vote. There is so much at stake. Don't let anyone ever take your power. The power of your voice is so important. You are going to make the difference. You are going to make the decision about your future, about your family's future. It is through the voice of your vote. And you have the power -- the power is with the people. And you know that. That's why you're standing in this line today, and I just came to say thank you. Thank you."

The polling place entrance was not under the green awning of the large brick building. That is the University Commons apartment building. The Cuyahoga County Board of Elections building is not shown in the video, it in is the other direction (behind the cameraman) up the street.

A tweet from Seth Richardson, lead politics reporter at Cleveland.com provides video of the scene:

.@KamalaHarris' next stop us outside the @cuyahogaboe where there's still a huge line of people waiting to early vote. pic.twitter.com/tqqUcj1YPL

In the aerial view below, the green pin on East 30th St. shows the general area where the video of Kamala Harris was taken. The yellow figure on Euclid Avenue is at the entrance of the polling place. Across the street from the Board of elections, with the satellite dishes on the roof, the WEWS News station is visible. At the time Harris spoke to voters, the line to get to the polling place entrance went around the corner and half way up the next block. 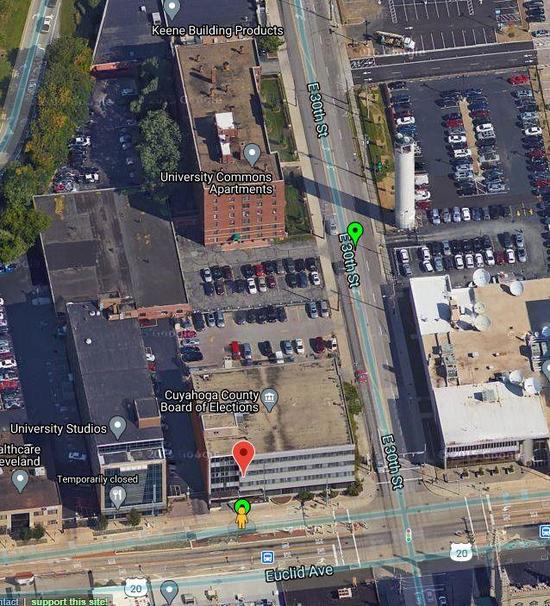 Courtney Gousman, the evening anchor at WEWS, recently tweeted a video from inside the station showing the view of the line:

My station is across from the Cuyahoga Co. Board of Elections, and for weeks, rain or shine, residents have patiently stood in line waiting for their chance to early vote. It shows how important this election is, when people will stand in the rain to exercise their right. ❤ pic.twitter.com/KBNBzKc2YH

The rules concerning electioneering near polling places vary from state to state. The National Association of Secretaries of State has provided a list of the polling place laws of each state as of October 2020.