Did the term "hungover" originate from a practice of allowing drunks to drape their bodies across a rope overnight for the price of a penny in Victorian England? No, that's not entirely true: The term hungover -- and its noun form, hangover -- did not come from the practice of sleeping over a rope, but there is record of some unusual and uncomfortable overnight sheltering accommodations available for destitute people in the 1800s.

The claim has been circulating as a post (archived here) where it was published on October 21, 2020. The photo is partnered with this text:

The lowest form of accommodation in Victorian England was access to bend over a rope for the night at the price of a penny. Usually used by drunken sailors who has spent all their money drinking. It's said to be the origin of the term "Hungover". 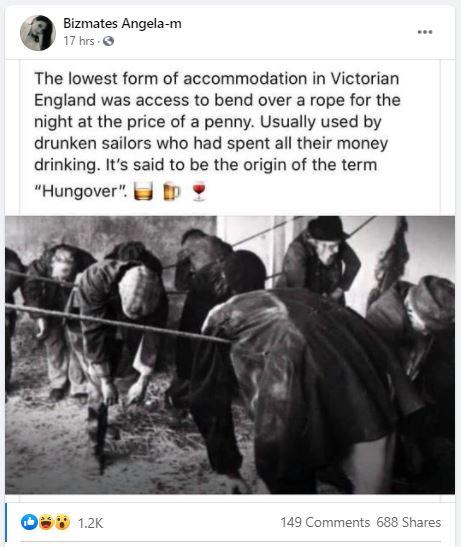 This grainy black and white photo looks very authentic and quite believable, but it is not a historic photo. It is a photo of actors. It was taken on the set of the film "The Great Train Robbery" set in the 1850s, but shot in the 1970s. The meme image is cropped. The full photo appears (here) in the GettyImages archive with this caption:

1/3/1979-Dublin, Ireland-ORIGINAL CAPTION READS: They're really hung over. Well, not really. In 19th century England, innkeepers supplied patrons with a "penny hang," a kind of drying out room. For a penny, innkeepers provided ropes for seamen to sleep on. In a new film, "The Great Train Robbery," a lot of patrons are on the ropes in this scene. The movie is set in the 1850s.

This scene only occupies about three seconds of the movie, and in the film, no contextual explanation is offered about the men on the ropes. A character who is being chased cuts through a building and encounters this room on his way through. He dashes in one door, passes under the ropes and exits. The sound of snoring can be heard. The scene is set in the middle of the day, not at night. Below is a color still of how the scene appears in the movie. 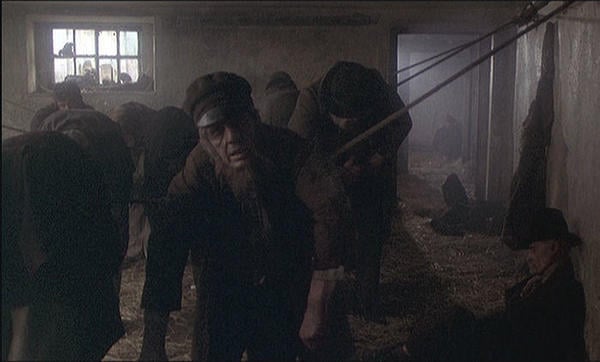 The terms "hungover" and "hangover" have nothing to do with drunks sleeping on ropes. It originally was used to mean anything left over from before, and was adopted to mean the feeling left after the drunken time before. Etymonline.com explains the etymology of the word hangover this way:

hangover (n.)
also hang-over, 1894, "a survival, a thing left over from before," from hang (v.) + over. Meaning "after-effect of excessive drinking" is attested by 1902, American English, on notion of something left over from the night before. As an adjective, in reference to a person, overhung (1964) has been used but is rare; that word meaning generally "placed so as to project or jut out" (1708).

Did people pay a penny to sleep standing with their arms hung over a rope? While it is possible that this was done standing, we found no specific record of it other than the scene from the Great Train Robbery movie shot in 1978. In the 1831 novel, 'The Magic Skin' by Honoré de Balzac he wrote of the beggars in Paris:

"We ... made it a point of honour to find out whether you were roosting in a tree in the Champs-Elysées, or in one of those philanthropic abodes where the beggars sleep on a twopenny rope."

Another artist living in Paris at the same time as Balzac and likely referencing the same accommodation, was Honoré Daumier, his 1840 sketch (view here) of six seated people sleeping leaned forward over a rope was included in a 2015 collection, "Sleep as Art" from the Swiss Broadcasting Corporation website swissinfo.ch.

A century later, George Orwell's 1933 book "Down and Out in Paris and London" dedicates all of chapter 37 to reviewing the types of lodging available and at what price:

At the Twopenny Hangover, the lodgers sit in a row on a bench; there is a rope in front of them, and they lean on this as though leaning over a fence. A man, humorously called the valet, cuts the rope at five in the morning. I have never been there myself, but Bozo had been there often. I asked him whether anyone could possibly sleep in such an attitude, and he said that it was more comfortable than it sounded -- at any rate, better than bare floor.

The Twopenny Hangover was not at the bottom of the list of accommodations. That was the one penny sit-up. Well-documented examples from the earliest days of the Salvation Army, which opened its first night shelter in 1888, describe a place where men could come in from the elements and sit on a bench, this price would include some soup and bread. Photos of the Blackfriars one penny sit-up from the turn of the century show rows of benches that have little in the way of back rests, but a small shelf projects from the back of each bench to make a small table for the person behind. There are conflicting reports if the one penny sit-up patron was allowed to sleep. In the illustrated "Living London" article, "London's Homes for the Homeless," which was published in 1901, the author's a first-hand account is that the one penny sit-up inmates were sleeping:

...the "Penny Sit-up" at Blackfriars, the cheapest lodgings in London.

Rightly understood, the "Penny Sit-up" is the most remarkable feature of the homeless side of London, not so much because what the ordinary visitor sees as of what does not see. He carries away a picture of a large shed, of row after row backed forms, occupied to their fullest capacity by men in all stages of squalor; and, if he is there about midnight, of the inmates bent forward on their seats, with their resting on their folded arms, which are supported in turn by the backs of the forms in front of them, all, or nearly all, are fast asleep. That is the surface aspect of the "Sit-up"; and it is sufficiently pathetic and suggestive to haunt one for weeks afterwards.

The four penny coffin allowed a person to lie flat on the floor in a space defined by a box. A waterproof tarpaulin was provided for a blanket. Eight pennies would buy a place to sleep on an actual bed with a mattress in a dormitory of at least 40 men to a room. 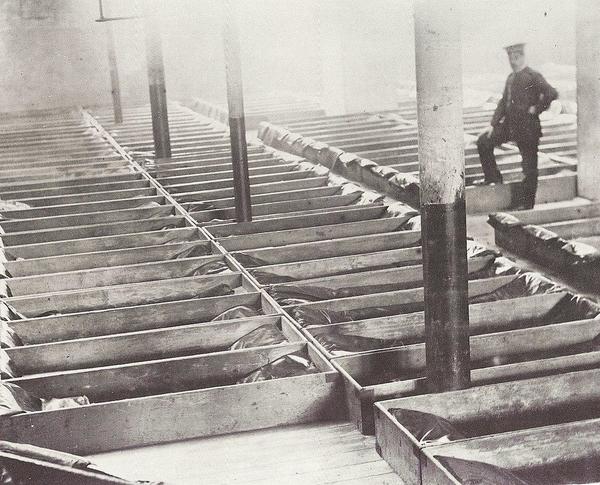