Did the mail-in vote count (2,589,242) in the presidential election in Pennsylvania exceed the actual number of ballots sent to voters (supposedly 1,823,148) and were 1,126,940 votes "created out of thin air"? No, that's not true: The Pennsylvania Department of State's website for election returns shows that about 2.6 million mail-in ballots had indeed been counted as of November 27,2020. More than 3 million voters had requested mail-in ballots as of the October 27, 2020 deadline, according to a news release the same day from Governor Tom Wolf's office. The 1,823,148 number appears to be the number of mail-in ballots requested for the June 2, 2020 primary election in Pennsylvania, not the November 3, 2020 election.

Today at the Pennsylvania election hearings, we learned that 1.8 million absentee ballots were mailed out for the 2020 election

Do you know how many were counted? 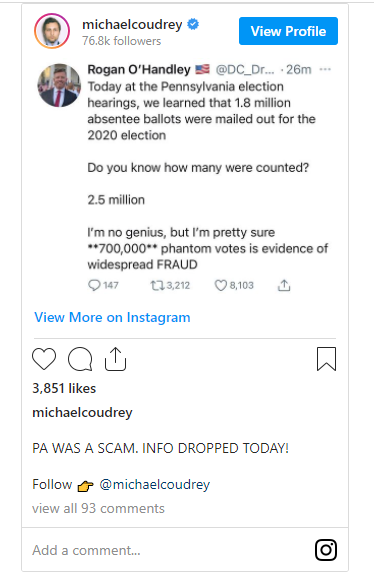 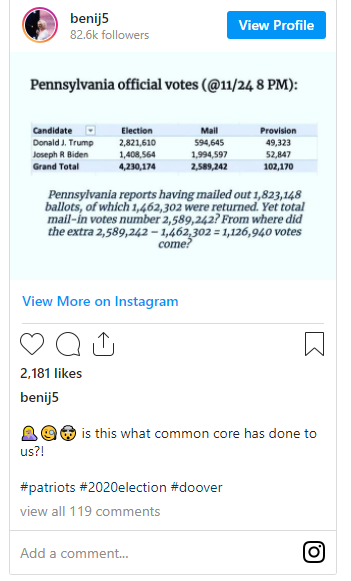 The 1,126,940 votes were created out of thin air. I won Pennsylvania by a lot, perhaps more than anyone will ever know. The Pennsylvania votes were RIGGED. All other swing states also. The world is watching! https://t.co/zmnk34Ny23

President-elect Joe Biden received 1,995,691 mail-in votes, according to The Pennsylvania Department of State elections website on November 27, 2020. President Donald Trump received 595,538 in mail-in votes. Libertarian Party candidate Jo Jorgensen received 24,783, for a total of 2,616,012 mail-in votes. The website states that "These vote totals do not include any votes from mail ballots received between 8 p.m. on election day and 5 p.m. the following Friday."

The website's numbers show that the claims made in the above Instagram posts don't stack up because they fail to state the correct number of mail-in ballots requested: more than 3 million.

The number "1,823,148" probably originated when someone tried to look up the number of Pennsylvania mail-in ballot requests and landed on a page listing statistics for the June 2, 2020 primary election in that state, for example a page like this (archived here). It shows a dataset provided by the Commonwealth of Pennsylvania described as:

This dataset describes a current state of mail ballot requests for the 2020 primary election. It's a snapshot in time of the current volume of ballot requests across the Commonwealth.

Specifically, it contains a table that lists the exact number of mail ballot requests for that election: 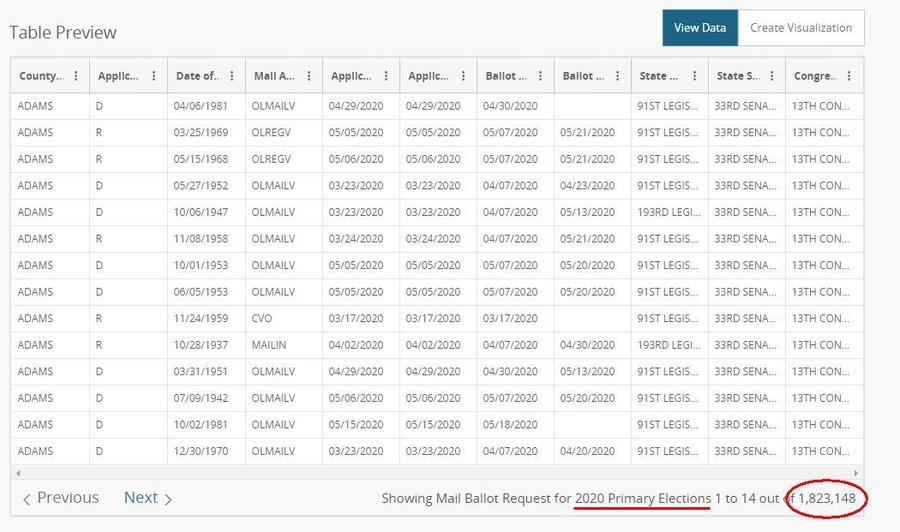 As you can see, this is not data about the November 3, 2020 Presidential election.