Does a video show a truck carrying protest riot gear being unloaded after the 2020 U.S. election? No, that's not true: This story was resurfaced on November 4, 2020, with intentional contextual deception regarding the date this incident occurred and which protests might be involved. The article does not even have the video in it, but the footage referred to is of the September 23, 2020 protests after grand jury decisions in the police shooting death of Breonna Taylor in Louisville, Kentucky. The video was widely circulated at the time. There is no reason for this story to be reintroduced into the post-election news cycle other than to deceptively capitalize on people's concerns about possible post-election civil unrest.

The article (archived here and here) was posted to the america.awm.com website on November 2, 2020. The identical article had previously been published by america.awm.com with the byline Tristan Morehouse on September 26, 2020. The November copy had the byline, Alice Edwards. The new duplicate was not posted to the AWM America Facebook page (here)(archived here) until November 4, 2020, with the caption, "Who is paying for all this??" The article's title is: "Video Shows A Truck Unloading Riot Gear For All The Protesters." It opened:

As Kentucky Attorney General Daniel Cameron held a press conference to explain why Breonna Taylor's killers were not indicted in her death, activists prepared themselves for ongoing protests. A witness observed a U-Haul truck loaded with protective gear unloading the supplies to prepare the protestors for police backlash come nightfall.

The U-Haul truck was spotted on Wednesday at 2 pm. This happened after the grand jury did not charge the police officers in the death of the young female first responder. Cops had botched a raid on her apartment and shot her while she was sleeping in bed.

Taylor was killed on March 13, two months before George Floyd died on May 25. Police battered down her apartment door in the middle of the night without knocking. While they did have a search warrant, the police shocked sleeping Taylor and her boyfriend.

The so-called "riot gear" that the protestors removed from the U-Haul truck included "shields" that were made of canvas and other materials to enable them to stand together and raise awareness around police brutality.

This is how the article appeared to social media users posted on the AMW America Facebook page at the time of this writing: 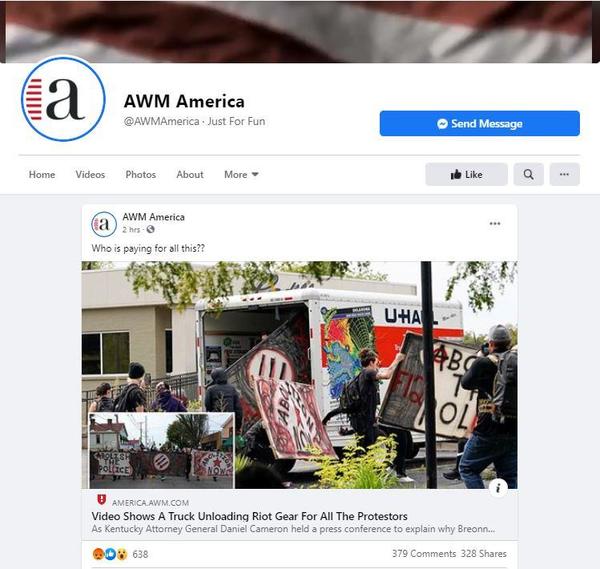 This article closely resembles the September 24, 2020, article published by dailymail.co.uk titled, "'Shields, we got shields!' Video emerges of 'riot supplies' being unloaded from U-Haul truck in Louisville hours before two cops are shot during violent protests." Lead Stories wrote an article on September 25, 2020, about another aspect of the U-Haul truck delivery, see that here.

The AWM American article has language connected to the time particulars of the Louisville protests: "The U-Haul truck was spotted on Wednesday at 2 pm." But the article, dated November 2, 2020, has no reference, even for the careful reader, that this is footage from six weeks earlier, in September.

The AWM America article has still photos of the U-Haul truck being unloaded, but does not have a video (mentioned in the article's headline). The video of the truck being unloaded which appeared in the Daily Mail article was filmed by journalist Brendan Gutenschwager who was covering the protests in Louisville, Kentucky.

Unloading the riot shields from the Uhaul #Louisville #BreonnaTaylor pic.twitter.com/F9KqzRB5lM

NewsGuard, a company that uses trained journalist to rank the reliability of websites, describes america.awm.com as:

A site owned by a marketing company that rewrites and repackages stories that have gone, or have the potential to go, viral on social media.