Are the numbers cited on this protest sign representative of gun deaths from last year? No, that's not true: This list of statistics is 40 years old. Although the numbers are old, the photo shows a protest in Los Angeles that likely took place in 2018. The statistics transcribed onto the poster are very out of date. The list even includes numbers from West Germany, which was reunified with East Germany in 1990.

The photo was originally posted (archived here) on Facebook on November 8, 2018. The 2-year-old post has recently resurfaced and is being shared again in November of 2020. The post has no caption and the text written on the poster reads:

Most instances of this photo found in online searches were posted on May 18, 2018, or after. The photo shows a protest scene in Los Angeles at the intersection of 5th Street and Broadway. This intersection was the site of the Los Angeles "March For Our Lives" protest that took place on March 24, 2018. There were many "March For Our Lives" protests on that day around the country, the largest being in Washington, D.C. The "March For Our Lives" movement arose in the aftermath of the February 14, 2018, shooting in Parkland, Florida, at Marjory Stoneman Douglas High School where 14 students and three staff members were killed.

On May 18, 2018, Rock the Vote posted a tweet including this photo and referred to a shooting that happened that day in Texas in which 10 people at a Santa Fe high school were killed.

We have been in 2018 for five months, yet Santa Fe High School marks Americas 22nd school shooting this year.

You can help change this by texting NVRAGAIN to RTVOTE.

Something is not right 👇🏽 pic.twitter.com/6aypvvGJmM

There is a second photo of this young woman holding this sign at 5th and Broadway. Another photo from the March 24, 2018, Los Angeles protest shows a different sign with the same list of statistics. This second sign appears in a DailyNews.com slideshow published on March 25, 2018, "March for Our Lives, downtown Los Angeles." This was not the only gun control protest that happened that spring. The Los Angeles Daily News reported on the February 19, 2018, rally at Pershing Square, just a block away from the other location "Gun-control advocates at LA rally say 'enough is enough' in wake of Florida school shooting." 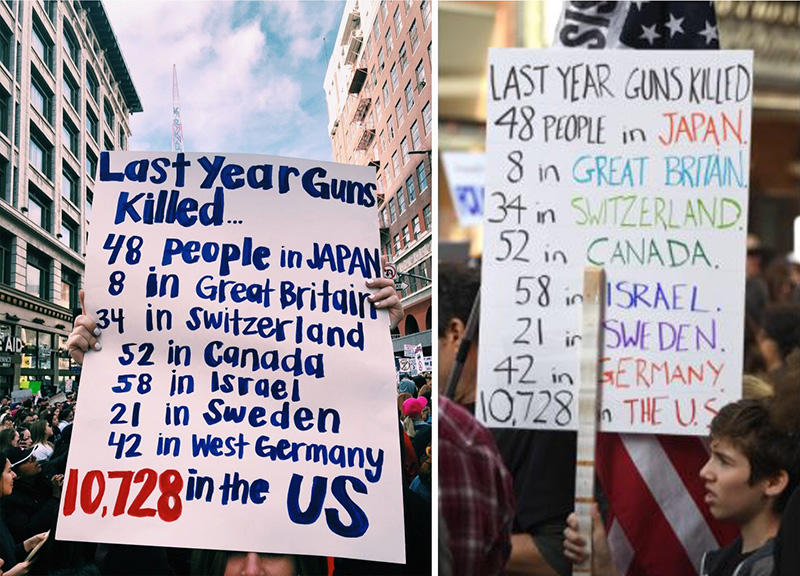 These old statistics circulated on social media back in late 2012, long before the protest in Los Angeles. Those posts from 2012 have been deleted, but articles both pointing out that even at the time the statistics were old, were written by FullFact, "Decades old gun deaths poster goes viral again" and PolitiFact, "Facebook posting on handgun deaths has out-of-date numbers, but the trend persists."

This "Stop Handguns Before They Stop You" ad (archived here) was published in a 1981 Playboy Magazine and is the likely popular source of the numbers. The ad was placed by Handgun Control, Inc. which is now known as the Brady Campaign to Prevent Gun Violence. The very small print in the ad, as explained by FullFact, says these are 1979 statistics from the FBI. 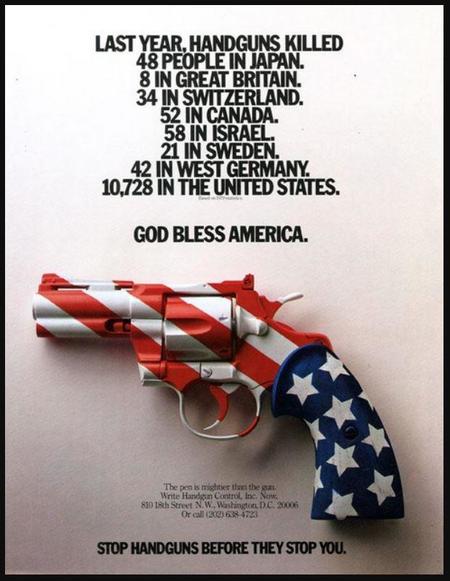 These statistics, the exact numbers and same collection of countries (minus Switzerland), are also cited in the March 3, 1982 advice column of Ann Landers (here). The statistics she offers are labeled as, "1980 Handgun Deaths."

Last year marked a record-high for gun-related deaths in the U.S. in nearly four decades, according to new data released from Centers for Disease Control (CDC) and Prevention's WONDER database.

Nearly 40,000 people were killed by guns last year, according to the data.

CDC statisticians told CNN that gun deaths have reached a record-high going back to at least 1979, when firearm deaths started to be coded in mortality data.

The CDC Data on firearms deaths can be found (here) in Table 18 on page 71 of the National Vital Statistics Reports; Volume 48, No. 11.