Did the Ad Council produce an ad warning people to not try marijuana, "Not Even Once," for fear that it might inspire a murderous craze? No, that's not true: This satirical ad is a tribute to a 1987 slasher flim called "Blood Rage," which features a Thanksgiving family gathering.

The satirical anti-marijuana ad was posted (archived here) on Facebook on November 26, 2020, with the caption, "That 'toke' lead to a murderous craze. Ad council was in they BAG With this one." The meme read:

This Thanksgiving remember the cranberry sauce, but forget the Marijuana.

Terry was convinced to take a 'toke' of a joint with his friend 'just to relax'. Immediately after, Terry killed his friend who had given him the marijuana in a murderous craze.

This satirical ad seems to have first surfaced a year ago on the Reddit forum, ForwardsFromGrandma, on the day before Thanksgiving, November 27, 2019. The small print by the purported Ad Council logo reads:

This ad brought to you by the Ad Council
Department of Studiohouse Designs
If you or someone you know is addicted to Marijuana
Call Domino's at (215) 712-1000 rent a tape, and enjoy!

A spokesman for the Ad Council confirmed to Lead Stories that the purported ad "is not a legitimate Ad Council ad."

Studiohouse Designs is a Philadelphia-based cult-horror themed online store specializing in T-shirts and posters. That is a real Philadelphia Domino's phone number that goes to the shop on Ridge Avenue in the Manayunk neighborhood.

The still images that were used to make this satire ad came from a 1987 slasher film called "Blood Rage" starring Mark Soper as both of the twin brothers, Todd and Terry. The film's promotional tagline is, "The Ultimate Feel-Bad Thanksgiving Slasher." The film's memorable cranberry sauce scene is preserved in the classic line delivered by Soper as he is examining the mess on his machete, "It's not cranberry sauce Artie."

Below is a screencapture of the scene where the fake ad's images originated. The YouTube channel horrortheatervideo posted the Blood Rage 1987 movie trailer on September 13, 2020. 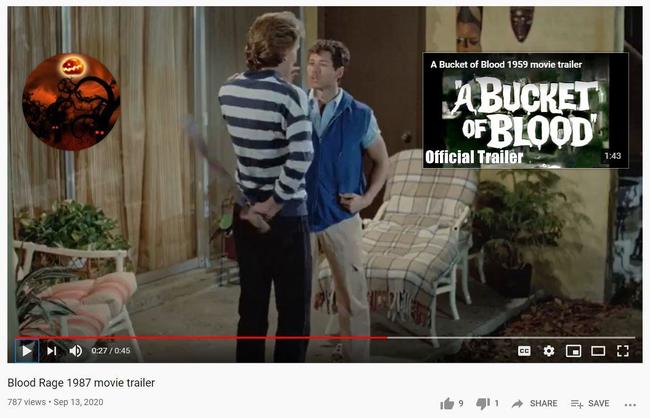