Did a Johns Hopkins economics lecturer prove there are no "excess deaths" in 2020 due to COVID-19 and that the official U.S. death toll is misleading? No, that's not true: Her claim is based on lines on an Excel chart she made from CDC data. It is not based on examination of death certificates or medical case files, or interviews with medical professionals who treated the patients whose deaths were attributed to COVID-19. The non-peer-reviewed claims were made in an informal online "conversation" hosted by the Johns Hopkins University School of Arts & Sciences, where she is assistant director of a master's degree program and teaches online courses in economics. Experts in mortality data say her analysis completely ignores seasonal patterns and doesn't address the overall data showing 300,000 more deaths this year than would have been consistent with past years, most of them caused by COVID-19.

The claim originated in a YouTube video posted by the Applied Economics program at Johns Hopkins University, (archived here) on November 13, 2020, under the title "COVID-19 DEATHS: A Look At U.S. Data." The video description read:

The MS in Applied Economics hosted a friendly conversation on a morose topic on November 11, 2020. This presentation was led by Dr. Genevieve Briand, MS in Applied Economics Assistant Program Director. Genevieve went over where the data could be accessed and downloaded. Together with her, event attendees were invited to think critically about the data presented. This webinar looked at very simple statistics; nonetheless, it shed light on the COVID-19 situation.

The nation's expert on mortality statistics told Lead Stories in a November 30, 2020, email that the economist, Genevieve Briand, failed to take into consideration the way deaths peak in the winter most years and drop off in the spring, which a trained public health analyst would have to take into account. Robert Anderson, chief of the Mortality Statistics Branch of the National Center for Health Statistics, said she missed key characteristics of this pandemic:

In 2018, deaths followed the normal pattern (although at a higher level than normal). In 2020, deaths did not follow the normal pattern...they should have been declining in the spring, but instead increased substantially.

...We have an additional peak in deaths in late July/early August that seems to have been completely ignored in this analysis. It is important to note that influenza and COVID-19 are different diseases. COVID-19 does not show the pattern of seasonality that we have seen for decades with influenza, nor should we necessarily expect the exact same exact response with regard to other causes of death.

In the video, Briand shows her webinar audience the provisional CDC mortality data she dropped into an Excel spreadsheet in order to graph U.S. deaths by age group and to also graph weekly deaths by disease.

In this Lead Stories report, the hyperlinked time codes will take the reader directly to that point in her video.

At 15 minutes and 9 seconds into her talk, Briand declares there is something wrong with the CDC data because deaths among the elderly did not markedly increase on her graph of overall deaths due to natural causes. "I would have expected that percentage to go up during the weeks of peak COVID-19 death. Weeks 11-13 and we don't have that...the size of those chunks of the column (representing the elderly) pretty much stayed the same." But her chart clearly shows a slight increase in the elderly as a proportion of overall deaths in weeks 11 and 13. COVID-19 is only one of many causes of death, so even a rise in COVID deaths among the elderly would not markedly change the age breakdown of U.S. deaths. 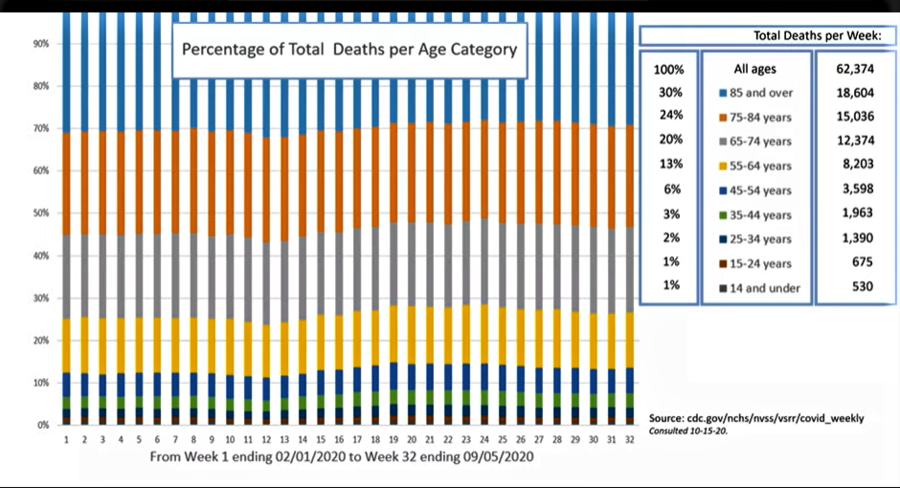 The correct way to analyze these data is to compare equivalent time periods, e.g., comparing deaths occurring in April 2020 with deaths occurring in April of prior years, to see if deaths (both total and cause-specific) are above what we would see in a normal year. This is what we do in our excess deaths analysis. The excess deaths analysis, which seems to have been completely ignored, shows that we have roughly 300,000 excess deaths thus far in 2020. I.e., the number of deaths thus far in 2020 is about 300,000 more than what we would see in a normal year.

Briand, at 39 minutes and 4 seconds lays out another basis for her claim: that the graphs she made show other causes of death falling in 2020, while COVID-19 deaths are rising.

She goes on to say at 40 minutes and 46 seconds, that official disease death reports -- filed with the CDC by medical examiners nationwide on a standardized form -- are wrong:

Briand makes that claim with no reference to specific deaths, doctors or death certificates in which she has evidence a death attributed to COVID was actually caused by something else.

During a question-and-answer period with viewers of the presentation, Briand repeats that claim, at 47 minutes and 46 seconds, saying that the data can only be the result of medical examiners misreporting deaths from other causes as death due to COVID.

Ronald Fricker, Jr., the former head of the statistics department at Virginia Tech, who studies statistical models used in disease surveillance, said Briand hasn't done enough work to make the claims she makes. Fricker, who has written for the The Conversation website about the excess deaths statistic as an indisputable measure of the pandemic, said in a November 30, 2020, email to Lead Stories:

This presentation is particularly unfortunate because it is just a series of conjectures embedded in a cursory overview of some CDC data.

He pointed to an October, 2020, editorial and research letter from the Journal of the American Medical Association, concluding that 67% of the excess deaths from March through July "were attributable directly to COVID-19." Regardless, it is clear that the total number of deaths in the United States has increased this year by at least 10% and likely will be 13% or more by the end of December.

Related to the economics lecturer's video, Dr. Rashid Buttar mistakenly promoted Briand to "researcher" in a Facebook post, claiming Briand had proved there are no 2020 excess deaths attributable to COVID-19. Genevieve Briand is not a researcher. She is an administrator and economics lecturer in a college of arts and sciences program for people seeking a master's degree in economics. Her claims were made in an informal online "conversation" with students, not in a formal research presentation, nor even a course lecture.

Lead Stories has also debunked the claim that a student newspaper article about Briand's claims was censored. The student article is still available online, but the editors of the student paper at Johns Hopkins retracted the article over mathematical errors and concerns that it was propagating misinformation about the pandemic: Fact Check: Johns Hopkins Student Paper Retracted Because CDC Data DOES Show Excess Deaths Caused By Covid-19.